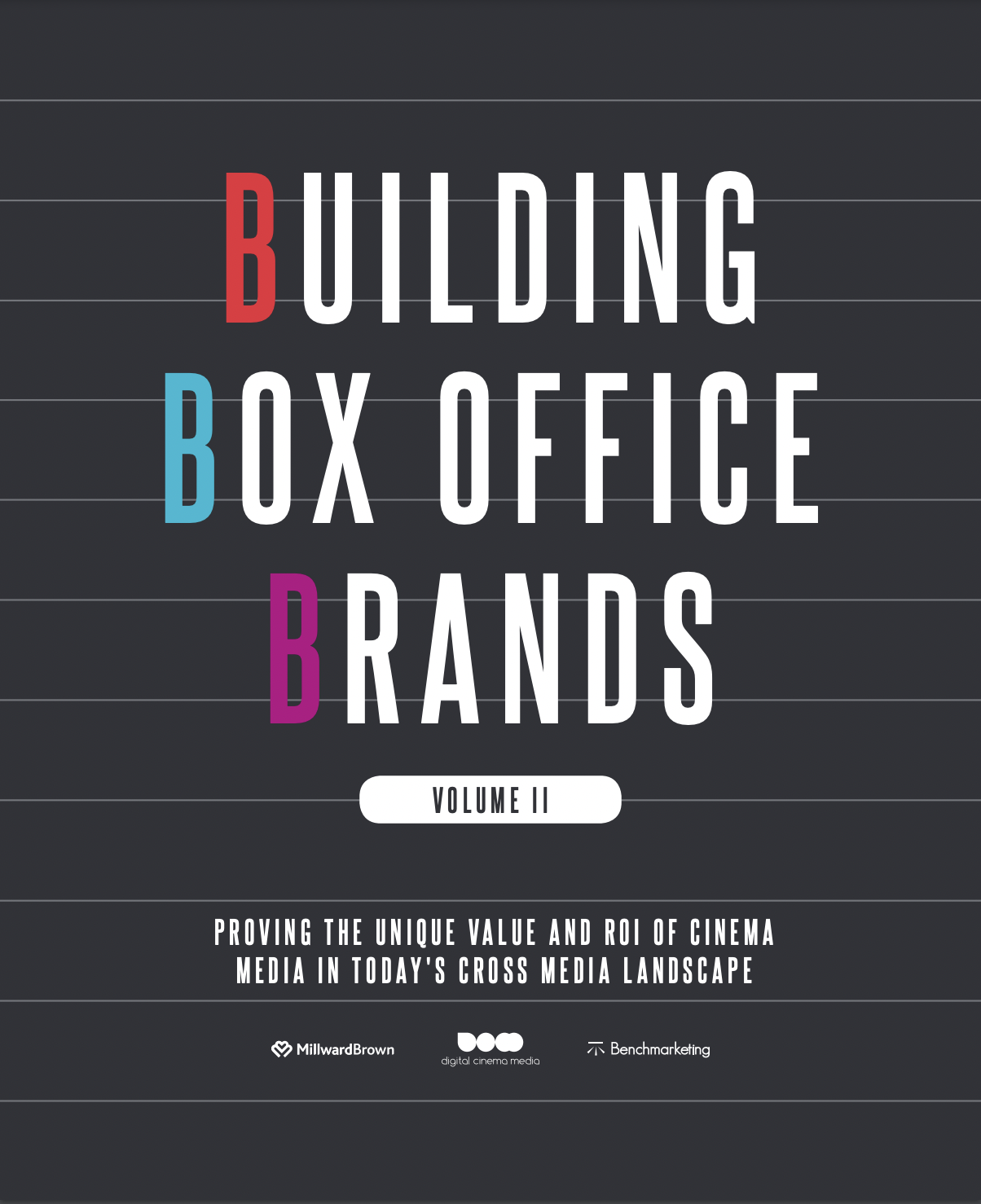 Centre of Attention is the fifth edition of Digital Cinema Media’s industry-leading Building Box Office Brands series. Created in partnership with industry experts, Lumen, the study provides concrete evidence of the level of attention given to ads in cinemas. Comparisons to other media (from Lumen’s databank) affirm cinema as a clear ‘attention leader’ in the advertising marketplace

With the topic of attention increasingly dominating industry headlines and discussions, ‘Centre of Attention’ aims to provide new insight into the role cinema advertising can play for advertisers seeking attentive and effective channels, and the impact cinema can deliver for brands as part of the media mix.

Cinema’s unique environment – an audience dissuaded from using their devices in front of the biggest of screens – makes it perfectly placed to achieve high viewability and engaged viewing. Compared to other media, cinema really stands out and its ability to grab and hold people’s visual attention is unmatched.

Cinemagoers watch an impressive 24 seconds of an ad, showcasing the value cinema delivers on depth of attention to a single view that isn’t available anywhere else. Cinema is the highest attention medium.

This impact is particularly highlighted when comparing to the norms from Lumen & TVision’s databank which shows on average people view 14 seconds of a TV ad, 4 seconds of a non-skippable YouTube ad and 2 seconds of an infeed Facebook ad.

Mike Follett, Managing Director, Lumen Research commented: “What the ‘Centre of Attention’ research shows is the incomparable attention results you get from cinema ads. But what’s really interesting is actually *comparing* cinema to other media. When you use the common currency of attention across media, you can really understand the power of the biggest screen.”

These results from the Lumen study highlight the brand impact that using high attention media like cinema can have – with people watching more of your ad, chances of recall of both the brand and key advertising message increase. As part of a wider AV mix, cinema is perfect placed for helping brands launch and land their messages with impact.

At DCM’s annual Upfronts event, which took place on the morning of Thursday 7 July at Odeon Leicester Square, Professor Joseph Devlin also introduced academic research which further put these results into context. The research highlighted how the cinema environment’s design is deliberately perfect for increasing focus and amplifying emotional response to the on-screen narratives, with high-quality exposure truly delivering for brands.

Professor Joseph Devlin, UCL, commented: “Cinema’s premium, high quality context for experiencing advertising ultimately increases the likelihood of making a strong, memorable impact that provides depth of information and processing – which when triggered by subsequent reminders on other channels can reinforce that initial impact.”

Karen Stacey, CEO, Digital Cinema Media, added: “Audiences are receptive to quality content in the right context and this study shows the valuable role cinema can play for brands, providing further compelling evidence that putting your ads where they will be the centre of attention – not somewhere they’re waiting to be skipped or scrolled past – will deliver real value and leave a lasting impact.

“Cinema’s offering has never been more powerful and, looking forward to the rest of the year and beyond, there is a remarkable, exclusive film slate that continues to draw in significant youth audiences that brands looking for the WOW factor should consider as part of an effective multimedia campaign.”

The Methodology
Data collection was conducted in Vue Westfield Shepherds Bush, with Lumen pre-recruiting 16-34 adults (a balanced sample based on gender, SEG and cinemagoing frequency) to attend showings of “The Batman”.

Participants were asked to wear ‘smart glasses’ that would record footage of their cinema visit. These glasses were worn throughout the pre-show, recording where participants were looking during the ads and trailers. After the film, participants returned the glasses and completed a short questionnaire. All video footage was then checked and human-coded by Lumen analysts. Cinema attention scores are compared to other media based on norms from Lumen and TVision’s databank.

Cinema and TV attention figures above refer to the average amount viewed of a 30" ad.

*Differentology, based on 54 campaigns from across 18 product categories. Average uplifts: those exposed to the ad in cinema vs those not – demographically matched cells, online survey methodology.

About Digital Cinema Media
Digital Cinema Media (DCM) is the market leader in UK cinema advertising, providing almost 3,500 screens at over 500 sites for advertisers. DCM sells 82% of the cinema advertising market through exhibitors including Cineworld, ODEON, Vue, Curzon, Picturehouse Cinemas and many other leading independent cinemas. The power of cinema is its ability to reach and engage audiences with no distractions. The biggest screen, a dark room, the best sound and impactful content means cinemagoers are engaged and ready to be told stories, so brands have an unrivalled opportunity to entertain and connect with them. In the last few years, cinema advertising has also become easier to plan and buy, becoming more flexible and even more affordable, with shorter production lead times and improved sound and picture quality.