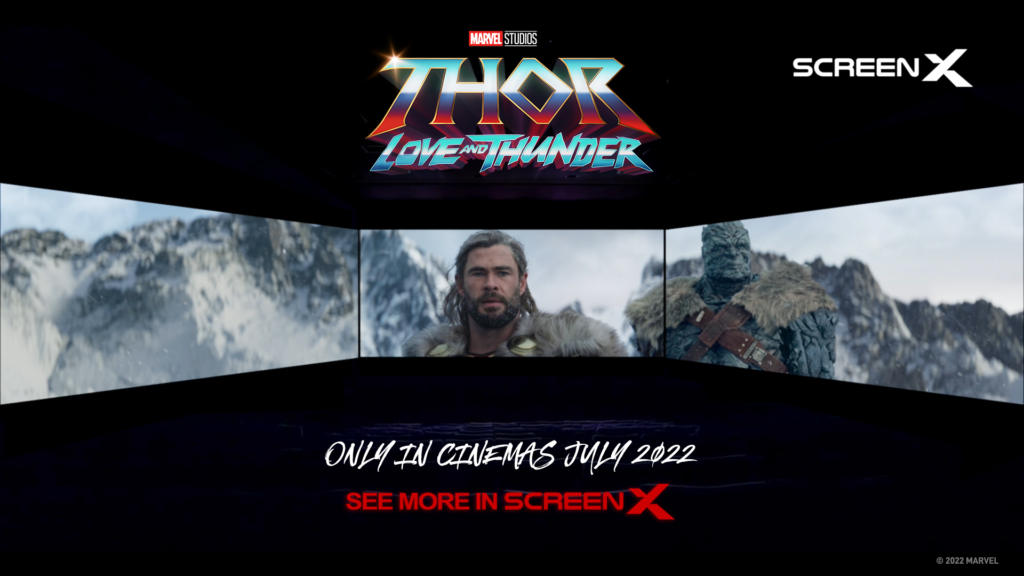 ScreenX is the world’s first multi-projection theatre technology that allows a 270-degree panoramic movie watching experience. ScreenX uses a proprietary system to expand specially selected sequences of the film onto the left and right-side walls of the auditorium, surrounding the audience with exclusive imagery as though they were inside the movie. ScreenX provides a virtual reality-like setting with cinema-quality resolution, creating a truly immersive experience for moviegoers.

“We are thrilled to offer movie-lovers in Langley yet another truly immersive theatrical experience, just in time for one of the biggest blockbusters of the summer,” said Kevin Watts, Executive Vice President, Exhibition & LBE, Cineplex. “ScreenX is one of the latest state-of-the-art technologies we’ve introduced to provide a memorable escape for movie lovers that can’t be replicated at home.”

“We are very excited to continue our expansion in Canada and continue our partnership with Cineplex. ScreenX is extremely powerful in immersing audiences into the film, and Cineplex’s commitment to open additional locations across the country has proven this,” said Don Savant, CEO & President, CJ 4DPLEX America.

Cineplex and CJ 4DPLEX first partnered in 2016 to launch Canada’s first 4DX auditorium at Cineplex Cinemas Yonge-Dundas and VIP in Toronto, Ontario. In 2018, Canada’s first ScreenX auditorium opened at Cineplex Cinemas Queensway and VIP in Toronto, Ontario. Since then, the partnership has been extended to bring 4DX theatres to six locations and ScreenX screens to 12 locations across the country.

Cineplex operates over 170 theatres and location-based entertainment venues across Canada, including 25 theatres in British Columbia. For further information and to learn about all the features Cineplex Cinemas Langley has to offer, head to Cineplex.com.

About Cineplex
Cineplex (TSX:CGX) is a top-tier Canadian brand that operates in the Film Entertainment and Content, Amusement and Leisure, and Media sectors. Cineplex offers a unique escape from the everyday to millions of guests through its circuit of over 170 movie theatres and location-based entertainment venues. In addition to being Canada’s largest and most innovative film exhibitor, the company operates Canada’s favourite destination for ‘Eats & Entertainment’ (The Rec Room) and complexes specially designed for teens and families (Playdium). It also operates successful businesses in digital commerce (CineplexStore.com), alternative programming (Cineplex Events), cinema media (Cineplex Media), digital place-based media (Cineplex Digital Media) and amusement solutions (Player One Amusement Group). Providing even more value for its guests, Cineplex is a joint venture partner in Scene+, Canada’s largest entertainment loyalty program.

Proudly recognized as having one of the country’s Most Admired Corporate Cultures, Cineplex employs over 10,000 people in its offices and venues across Canada and the United States. To learn more, visit Cineplex.com.

About CJ 4DPLEX
CJ 4DPLEX is a leading, next-generation cinema technology company, headquartered in Seoul with international offices in Los Angeles and Beijing. The company has created innovative film technologies for theaters worldwide that include ‘ScreenX’, ‘4DX’, and ‘4DX Screen’ for consumers to experience films in ways that were never before possible.

CJ 4DPLEX is a part of the CJ Group conglomerate that also includes entertainment powerhouses CJ CGV, the fifth largest theater chain in the world, and CJ ENM (CJ Entertainment & Media), who produced the Academy Award, Golden Globe and SAG Awards winning film, “Parasite”. CJ 4DPLEX was named Most Innovative Company of 2017 and 2019 in Live Events by Fast Company, and the technology has been recognized with Silver at the Edison Awards in the Media and Visual Communications-Entertainment category in 2015 and 2018.

ScreenX is the world’s first multi-projection cinema with an immersive 270-degree field of view. By expanding the image beyond the frame and onto the walls of the theatre, ScreenX draws you into the story on the main screen and immerses you in a virtual reality like setting with cinema quality resolution. To date, there are over 380 ScreenX auditoriums around the world in 38 countries.

4DX provides moviegoers with a multi-sensory cinema-going experience, allowing audiences to connect with movies through motion, vibration, water, wind, snow, lightning, scents, and other special effects that enhance the visuals on-screen. Each 4DX auditorium incorporates motion-based seating synchronized with more than 21 different effects and optimized by a team of skilled editors. To date, there are over 783 4DX auditoriums around the world, spanning over 69 countries.

4DXScreen is a powerful combination of our super premium immersive theatre technologies of ScreenX and 4DX in one auditorium, creating a never-before-seen experience for cinemagoers. To date, there are 41 4DXScreens installed around the globe.