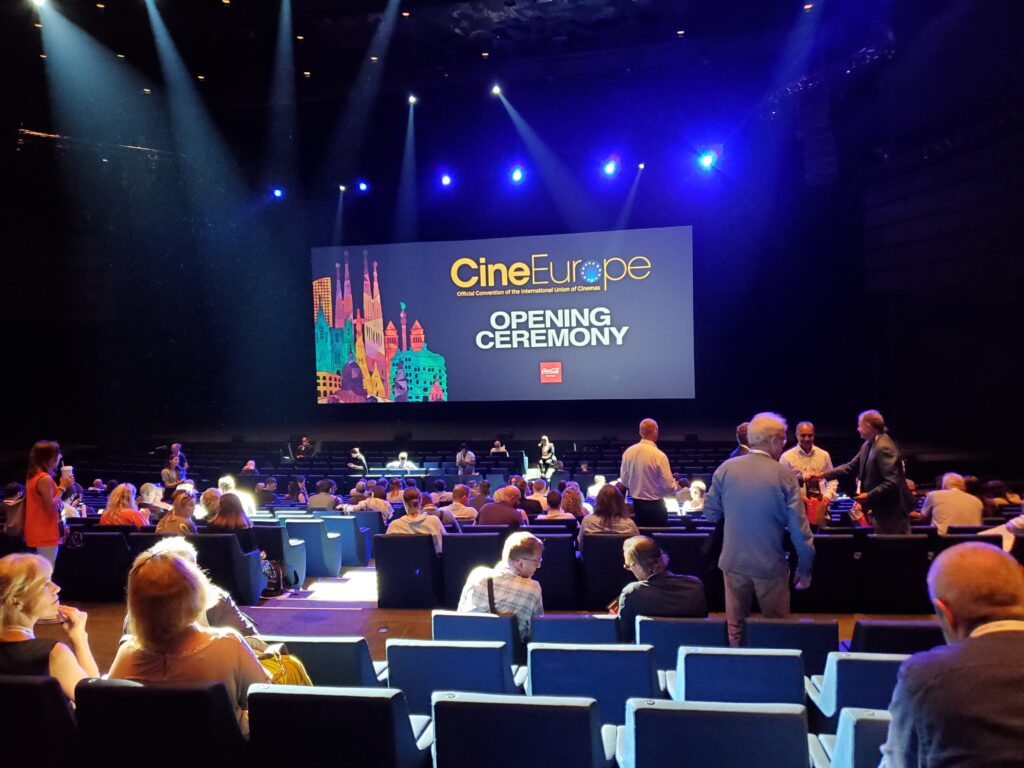 Phil Clapp and Laura Houlgatte, President and CEO respectively of the International Union of Cinemas (UNIC), the European cinema trade grouping, today celebrated the Big Screen experience and the positive recovery results around Europe and globally at CineEurope 2022.

Welcoming delegates at the opening ceremony to this year’s event, which is also UNIC’s annual convention, both highlighted the strong performance of the European cinema sector in 2021, demonstrating its resilience and the strength of the recovery in the region – as a result particularly of the diverse range of new films on offer. While in many UNIC territories local titles fueled the recovery, the contribution made by US studio colleagues was also celebrated, with several titles breaking national and international box office records – and continuing to do so in the first half of 2022, further evidence they said of the insatiable public appetite for the cinema-going experience, as well as the value and relevance of the theatrical model.

That diversity of film content will be highlighted throughout the week in Barcelona, with presentations from major US and European studios – including a CineEurope first screening of the 2022 Cannes Film Festival Palme d’Or, Triangle of Sadness, on Monday evening.

The UNIC leaders also acknowledged those who had supported cinemas during recent difficult times – the governments across Europe that provided vital financial support and those studios and distributors who had shown faith in the sector and brought their films to the Big Screen.

They reiterated their call for all of those involved in the cinema ecology, but in particular content providers and the creative talent and investors behind them, to recognise the economic as well as cultural value of the proven business model of theatrical exclusivity. In doing so, they reminded all stakeholders, from cinema operators to streaming companies to broadcasters, of their shared responsibility in ensuring that audiences in Europe were not deprived of the unique experience of enjoying a film together on the Big Screen.

A special message of support was also given to Ukrainian colleagues, with UNIC offering them its unwavering support and solidarity.

The speech also celebrated the inaugural Giants of Exhibition: Europe, a ranking of the top 50 European cinema groups by screen count in Europe published by UNIC in collaboration with The Boxoffice Company, as well as the 2022 edition of the organisation’s Women’s Leadership mentoring scheme, with another cohort of 11 pairs of participants for the programme’s sixth year.

In closing the joint speech, Laura Houlgatte emphasised the need to ensure that EU policy-makers and politicians saw the full picture when it came to the value of the sector, and that the interests of the cinema industry were protected and celebrated.

CineEurope
CineEurope 2022 is taking place 20-23 June at the Centre Convencions Internacional Barcelona (CCIB) in Barcelona, Spain. CineEurope is the longest running and most successful European convention and trade show for major, regional, and independent cinema professionals. CineEurope will feature exclusive screenings and product presentations of upcoming films, sponsored events, timely and informative seminars, and the CineEurope Trade Show. CineEurope is the Official Convention of the Union Internationale des Cinémas/International Union of Cinemas (UNIC).