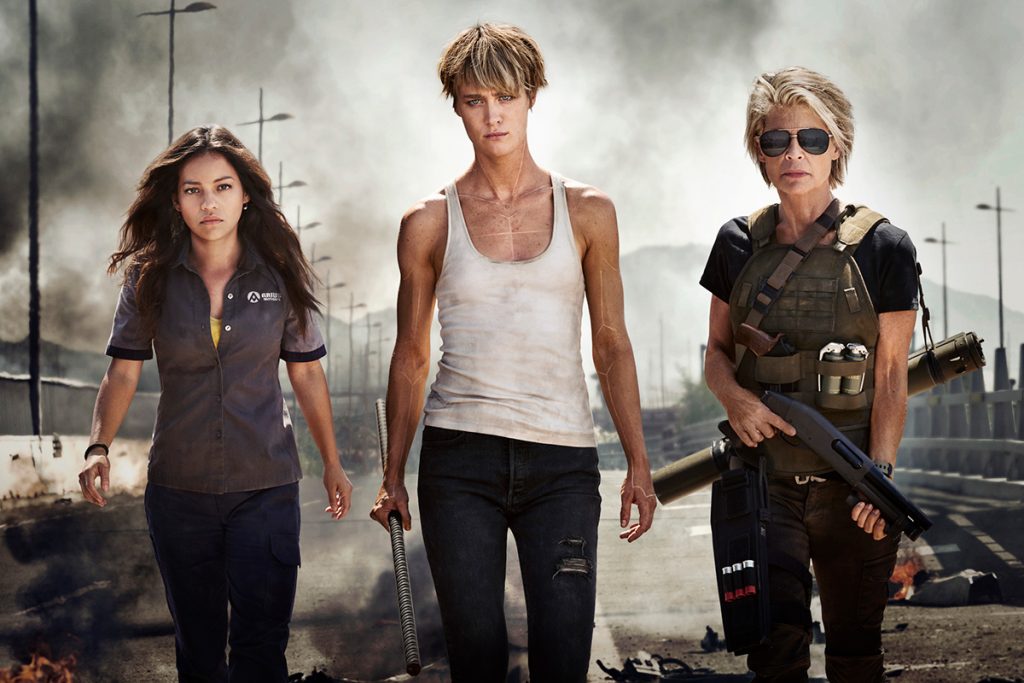 Linda Hamilton, Natalia Reyes, Mackenzie Davis, and Gabriel Luna will receive this year’s “CinemaCon Ensemble Award.” Mitch Neuhauser, Managing Director of CinemaCon, announced the award today. CinemaCon, the official convention of NATO, will be held April 1-4, 2019 at Caesars Palace in Las Vegas. The cast of Terminator: Dark Fate will be presented with this special honor at the “CinemaCon Big Screen Achievement Awards” ceremony taking place on the evening of Thursday, April 4, at The Colosseum at Caesars Palace, hosted by the Coca-Cola Company, the official presenting sponsor of CinemaCon.

“With a cast that includes many familiar faces as well as talented newcomers, the next chapter of this blockbuster franchise is sure to entertain audiences around the globe. And, of course, it’s great to have Linda Hamilton back in the franchise,” noted Neuhauser. “We are thrilled to have the opportunity to honor this exciting cast with this year’s ‘CinemaCon Ensemble Award.’”

Since coming to national attention playing the iconic “Terminator” role of “Sarah Connor,” Linda Hamilton has gone on to star in such films as Terminator 2: Judgment Day, and Dante’s Peak. On the small screen, her credits include “Beauty and the Beast,” for which she received both an Emmy Award and two Golden Globe nominations and “A Mother’s Prayer.”

Born in Bogotá, Colombia, Natalia Reyes began her career at the age of nine appearing on stage and in various films and television series. She is best known across Latin America for her starring role in “Lady, La Vendedora de Rosas,” as well as Pickpockets, “Cumbia Ninja” and “2091.” Most recently, she starred in the films Sumergible, Brakland, Running with the Devil, and Birds of Passage.

Mackenzie Davis recently wrapped production on The Turning, a modern take on Henry James’ novella “The Turn of the Screw” which is set to be released in 2020. Last year she starred in the critically-acclaimed Tully, and in 2017 appeared in Blade Runner 2049. Additional film credits include Always Shine, The Martian, and her breakout performance in Breathe In. On the small screen she starred in the final season of the critically-acclaimed “Halt and Catch Fire,” and in an episode of “Black Mirror.”

Gabriel Luna has been seen on the big screen films such as Freeheld, Transpecos, and Balls Out. On the small screen, he has been seen in “Marvel’s Agents of Shield,” “True Detective,” “Texas Cyclone,” “Harley and the Davidsons,” “Wicked City,” and “Matador.” He also recently starred in the Minhal Baig directed Hala.

About NATO
The National Association of Theatre Owners (NATO) is the largest exhibition trade organization in the world, representing more than 33,393 movie screens in all 50 states, and additional cinemas in 94 countries worldwide. NATO’s membership includes the largest cinema chains in the world and hundreds of independent theater owners, too.
Additional information on CinemaCon can be found at www.cinemacon.com.