“Cars 3” and “Wonder Woman” Speed to Victory, While “All Eyez” on New Tupac Biopic in Fandango’s Weekend Sales and Fanticipation Buzz Index 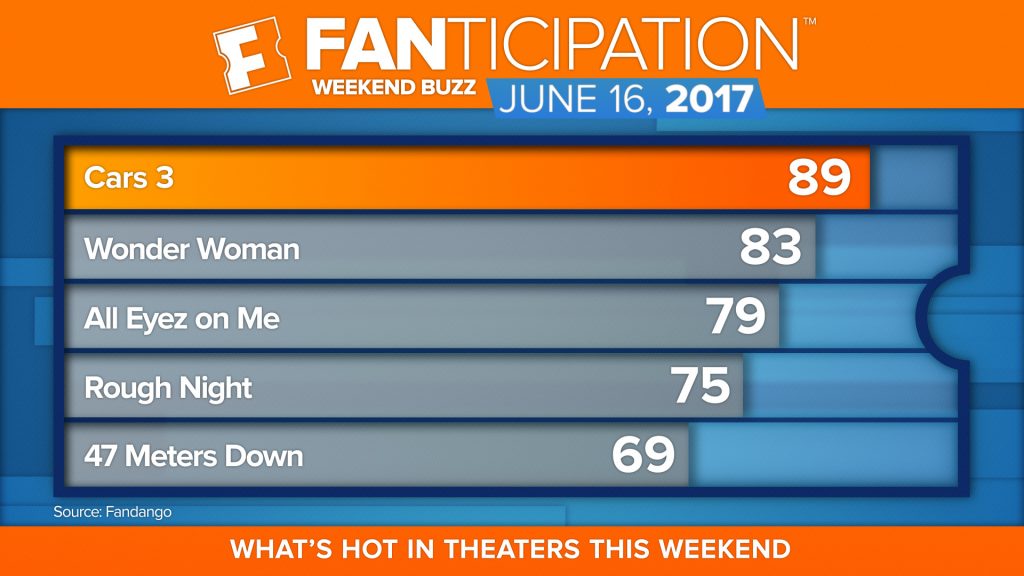 Disney/Pixar’s “Cars 3,” “Wonder Woman” and the new Tupac Shakur biopic, “All Eyez on Me,” are finishing at the top of Fandango’s weekend sales and Fanticipation movie buzz indicator with 89, 83 and 79 points, respectively, out of 100 points.

Pixar’s “Cars 3” is currently outpacing Disney Animation’s “Zootopia” and Pixar’s “Inside Out” at the same point in the Fandango sales cycle. (In Fandango’s daily ticket sales for Thursday showtimes only, “Cars 3” is taking first place, while “All Eyez on Me” is finishing in second place.)

According to a Fandango survey of more than 1,000 “All Eyez on Me” moviegoers:

“As summer movie season kicks into high gear, ‘Cars 3’ is racing to the top of our ticket sales, while ‘Wonder Woman’ continues to thrive in its third weekend,” says Fandango Managing Editor Erik Davis. “At the same time, all eyes are on the brisk advance ticket sales for the Tupac biopic, ‘All Eyez on Me,’ which is shaping up to be a potential summer sleeper hit along the lines of 2015’s ‘Straight Outta Compton.’”