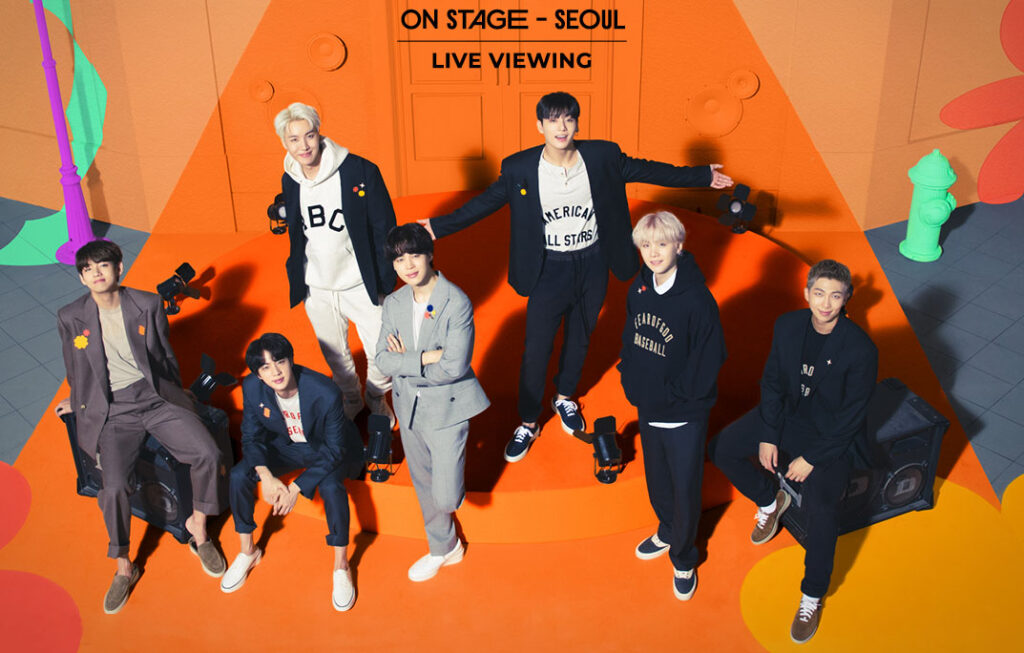 Twenty First Century pop icons BTS broke the global event cinema record with a worldwide box office gross of $32.6 million* with “BTS Permission to Dance on Stage – Seoul: Live Viewing.” This event, the first live worldwide cinema broadcast of a concert from South Korea, was presented by HYBE and Trafalgar Releasing on March 12 in 3,711 cinemas in 75 countries/regions for a one-day limited engagement, with reported sell-outs across the world.

In North America, ‘BTS Permission to Dance on Stage – Seoul: Live Viewing’ reached the No. 2 spot in the Saturday box office with a gross of more than $6.84 million and a per-screen average of over $8,500 across 803 movie theaters.

HYBE 360 President DJ Kim said, “As the pandemic made it difficult to access the concert venue, we wanted to create an opportunity for fans to gather and watch the concert together. We came up with the idea of ‘live viewing’ at cinemas and are delighted to offer an alternative experience for fans to enjoy the concert live.”

Marc Allenby, CEO of Trafalgar Releasing said, “We are delighted with the record-breaking success of this project, not only for Trafalgar Releasing but the event cinema industry as a whole. It’s a testament to both the overwhelmingly dedicated fandom of the ARMY and the overall return to cinemas on a global scale.”

The event was HYBE and Trafalgar Releasing’s fourth global title with the pop icons, including 2018’s ‘Burn The Stage: The Movie,’ ‘2019’s Bring The Soul: The Movie’ and 2020’s ‘Break The Silence: The Movie.’

About BTS
BTS, an acronym of Bangtan Sonyeondan or “Beyond the Scene,” is a Grammy-nominated South Korean group that has been capturing the hearts of millions of fans globally since its debut in June 2013. The members of BTS are RM, Jin, SUGA, j-hope, Jimin, V, and Jung Kook. Gaining recognition for their authentic and self-produced music, top-notch performances, and the way they interact with their fans, BTS has established themselves as 21st century pop icons breaking countless world records. While imparting a positive influence through activities such as the LOVE MYSELF campaign and the UN ‘Speak Yourself’ speech, the band has mobilized millions of fans across the world (named ARMY), collected six No.1 Billboard Hot 100 singles in a span of a year and just over a month, performed multiple sold-out stadium shows across the world. They were also named TIME’s Entertainer of the Year 2020. BTS was nominated two years in a row for Best Pop Duo/Group Performance at the 63rd and 64th GRAMMY Awards and has been recognized with numerous prestigious awards like the Billboard Music Awards, American Music Awards (Artist of the Year 2021) and MTV Video Music Awards.

About HYBE
HYBE, formerly known as Big Hit Entertainment, is an entertainment lifestyle platform company that innovates the music industry under the mission “We believe in music”. The company was listed on the KOSPI Market of Korea Exchange (KRX) in October 2020. HYBE has established its business ventures in entertainment lifestyle upon three pillars. The label division brings creatives centered around music and artists such as BTS, TOMORROW X TOGETHER, SEVENTEEN, ENHYPEN and ZICO. Solution operates specialized business units for video content, IP, learning and games. The platform division connects and expands all of HYBE’s contents and services. Based on organic operations and synergies created in each field, HYBE aims to create top-notch content, expand fan experience, and make a difference for anyone who enjoys a music-based entertainment lifestyle.