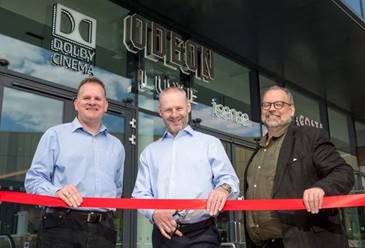 ODEON and Dolby have partnered to bring film fans in and around the city the ultimate cinema experience with their brand new Dolby Cinema which combines dramatic imaging that delivers a spectacular, leading-edge visual experience through the Dolby Vision dual 4K laser projection system that brings the story alive with spectacular, ultravivid picture. It delivers twice the brightness, 500 times the contrast ratio, blacker blacks, and an unsurpassed colour palette, all in comparison to standard screens, all projected on a massive 19m screen for a vibrant, lifelike cinema experience like no other.

The studio-grade Dolby Atmos immersive audio system transports viewers into the film with breathtakingly realistic dialogue and effects, filling the cinema with a soundscape that flows all around and above the audience. With the highest standards for technical design plus 263 Luxe recliners, every person will get a truly immersive and unforgettable cinematic experience, no matter where they are in the Dolby Cinema auditorium.

The superior technology is combined with the ultimate luxury throughout the cinema including 971 handmade reclining chairs across the 10 screens and top-of-the-range food and drink options including lattice fries and chicken strips along with classic favourites such as sweet and salted popcorn and a Coca Cola Freestyle machine with over 100 different flavours to enjoy.

The cinema also has an Oscar’s Bar serving a range of alcoholic and non-alcoholic beverages, along with freshly brewed coffee from the Costa Coffee station.

Last night over 200 local community members attended a Gala evening to mark the opening. Attendees were hosted in a special reception where ODEON and Dolby representatives officially opened the cinema with a ribbon cutting and were given the choice of watching one of two films screened, Wild Rose orShazam!

John Alls, General Manager at ODEON Luxe Leeds Thorpe Park said, “After months of works we are thrilled to be opening our doors to film fans in Leeds. In partnership with Dolby we are excited to be at the forefront of cinema technology and luxury and are delighted to bring this unparalleled experience to the community.”

Julian Stanford, Senior Director Dolby Cinema Europe added, “It’s exciting to see the growth of Dolby Cinema in the UK with a second ODEON offering our technology to revolutionise cinematic experiences. We’re delighted to be at the opening of ODEON Luxe Leeds, a cinema built from scratch, designed to bring local film fans a truly immersive and unrivalled cinematic experience. Filmmakers are choosing Dolby Cinema technology to create a new generation of storytelling, and starting tonight we can’t wait for film fans in Leeds to experience the true magic of Dolby Cinema.”

Locals are invited to check out the new cinema and all it has to offer, and from now until 30 May, ODEON will be offering a special ticket price of £5 per ticket, before 5pm Monday to Friday. Just in time for the school holidays!

Some of the highly anticipated films to be shown in the brand-new cinema include:

Dolby Laboratories (NYSE: DLB) is based in San Francisco with offices in over 20 countries around the globe. Dolby transforms the science of sight and sound into spectacular experiences. Through innovative research and engineering, we create breakthrough experiences for billions of people worldwide through a collaborative ecosystem spanning artists, businesses, and consumers. The experiences people have – in Dolby Vision, Dolby Atmos, Dolby Cinema, Dolby Voice, and Dolby Audio – revolutionize entertainment and communications at the cinema, on the go, in the home, and at work.

Dolby, Dolby Atmos, Dolby Audio, Dolby Cinema, Dolby Vision, Dolby Voice, and the double-D symbol are among the registered and unregistered trademarks of Dolby Laboratories, Inc. in the United States and/or other countries. Other trademarks remain the property of their respective owners. DLB-G

With more than 120 cinemas, over 950 screens and 87 years of cinema experience, ODEON is the largest cinema exhibitor across the UK & Ireland.