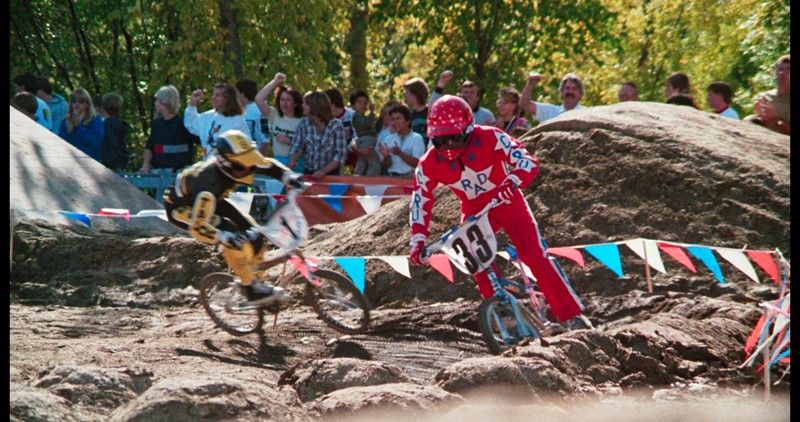 As part of the “Rad 35th Anniversary” event, fans will see for the first time “A Rad Documentary – Inside the BMX Movie That Changed Everything.” Featuring never-before-seen interviews with the cast and crew and behind-the-scenes footage, the documentary gives audiences an inside look into the making of the film that helped catapult the extreme popularity of the 1980s BMX fad.

Tickets for “Rad 35th Anniversary” can be purchased online at www.FathomEvents.com or at participating theater box offices beginning September 17. A complete list of theater locations is available on the Fathom Events website (Participating theaters are subject to change).

Directed by Hal Needham, “Rad” tells the story of Cru (Allen), a young man with a dream of making it big as a BMX racer by racing the “Helltrack” and winning the grand prize of $100,000 and a Corvette.

“’Rad’ is a fun and wild visit to the neon-colored age of the ‘80’s. Film fans will enjoy this movie that kicked-off decades of BMX popularity,” said Ray Nutt, Fathom Events CEO.

About Fathom Events
Fathom is a recognized leader in the entertainment industry as one of the top distributors of content to movie theaters in North America. Owned by AMC Entertainment Inc. (NYSE: AMC); Cinemark Holdings, Inc. (NYSE: CNK); and Regal Cinemas, a subsidiary of the Cineworld Group (LSE: CINE.L)., Fathom operates the largest cinema distribution network, delivering a wide variety of programming and experiences to cinema audiences in all of the top U.S. markets and to more than 45 countries. For more information, visit www.FathomEvents.com.

About Utopia
Co-founded by filmmaker Robert Schwartzman in 2018, Utopia is a film distribution and sales company that specializes in bold and daring independent cinema. With a hands-on approach to creative risk-taking, Utopia builds tailor-made releases that champion each film’s audience and the voices behind them. Recent Utopia titles include the TIFF breakout comedy Shiva Baby by Emma Seligman; The Ross Brothers’ Sundance 2020 selection Bloody Nose, Empty Pockets; Academy Award Winner Errol Morris’ American Dharma; Annabelle Attanasio’s Cannes breakout Mickey and the Bear, starring Camila Morrone; and, the 4K restoration of Hal Needham’s 1986 cult-classic, RAD. Upcoming releases include the Sundance and New Directors/New Films 2021 selections El Planeta and We’re All Going To The World’s Fair; Dasha Nekrasova’s Berlinale premiere The Scary of Sixty-First in partnership with Shudder and the Dash Snow documentary Moments Like This Never Last from Cheryl Dunn and Vice Studios.

Utopia has since launched Utopia Originals, a division dedicated to the development, packaging, and sales of original film and television content. Its most recently announced project is in partnership with Norman Reedus’ bigbaldhead Productions And Shout! Studios for a ‘Sorority House Massacre’ TV Series, based off of the cult classic of the same name. For more information, visit https://www.utopiadistribution.com/.