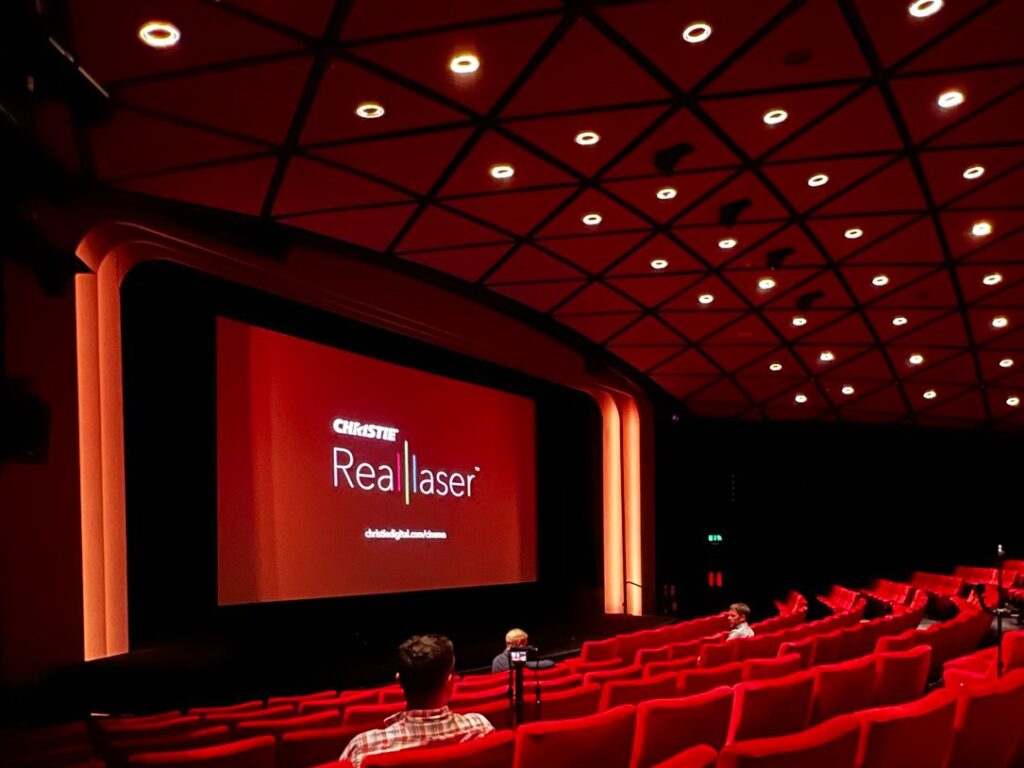 Christie is pleased to announce that the British Film Institute (BFI), the UK’s leading organisation for the moving image and the owner of the world’s largest film and television archive, has installed Real|Laser illumination technology in its main screening room, NFT1, at its flagship venue BFI Southbank. Following a trial period at the BFI London Film Festival, a new CP4420-RGB pure laser projector is now delivering incredibly colorful and detailed true-to-life images, combined with an excellent low cost of ownership and operational lifetime thanks to the onboard Christie CineLife+ electronics and RealLaser illumination technology.

Christie has a longstanding relationship with the BFI. The previous Christie projector installed in NFT1 had been in-situ for an impressive 14 years. Dominic Simmons, Head of Technical Services at the BFI was impressed by the reliability and performance of the original Christie Series One projector but felt the time had come to invest and move into laser. Christie supplied a CP4420-RGB, its flagship cinema laser projector, for the Embankment Theatre which is exclusively constructed for the BFI London Film Festival. “We liked the results we saw with laser at the Festival,” he commented. “And it also went down very well with the filmmakers.”

Directors and film representatives attended the official screenings at the Festival and were able to sample their work on the Christie RealLaser illuminated projector: “They loved the images,” says Simmons. “In fact, the pictures we can now show audiences are vivid, have very good contrast and excellent quality in general. Moreover, the sustainability of pure laser helps reduce energy use, so the upgrade has been a double whammy.”

The CP4420-RGB 20,000 lumen projector has an incredibly wide gamut for color fidelity and is future-proofed with a high frame rate (4K 120fps or 4K 60fps/eye 3D playback). On the operational side, the projector is designed with a very long-lasting light source – more than 50,000 hours of stable DCI-specified brightness. “The low maintenance is clearly positive, there will be savings with every use and no change of lamps which is very helpful,” says Simmons adding, “We have a matte white screen which is a good fit for laser projection.”

The refurbishment of NFT1 also updated the audio system. “I heard Vive Audio in another cinema and thought it sounded very good indeed,” explained Simmons. “We wanted to upgrade, and Christie had a great solution with the ribbon drive technology (line arrays). Christie helped in the consultancy process and NFT1 was fitted with five LA3i line arrays and five S215 subwoofers for the screen channels, two S218LP subwoofers and LA3Si surround loudspeakers.”

In a further demonstration of its commitment to excellence in cinema audio, Christie partnered with Powersoft, whose world-class amplifiers support Christie Vive Audio.

About Christie
Christie Digital Systems USA, Inc. is a global visual and audio technologies company and a wholly owned subsidiary of Ushio Inc., Japan (JP: 6925). Christie revolutionized the movie industry with the launch of digital cinema projection, and since 1929 has embraced innovation and broken many technology barriers. Our technology, paired with the support of professional services to design, deploy and maintain installations, inspires exceptional experiences. Christie solutions are used around the world, from the largest mega-events to the smallest boardrooms, and include advanced RGB pure laser projection, SDVoE technology, content management, image processing, LED displays, and Christie CounterAct far-UVC disinfection solution with patented Care222 technology. Visit www.christiedigital.com.