“Avatar: The Way Of Water” Now Among Top Three IMAX Releases Of All Time With $215 Million In Imax Global Box Office 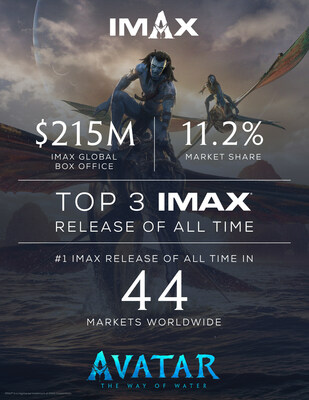 IMAX Corporation today announced that Disney/Lightstorm’s “Avatar: The Way of Water” is now the third highest grossing IMAX release of all time with more than $215 million in IMAX global box office through Monday in its first full month of release.

With several weeks to go in its IMAX engagement, James Cameron’s groundbreaking global cinema event stands as the highest grossing IMAX release of all time in 44 countries and territories worldwide — claiming the top spot in more individual markets than any release in IMAX history. IMAX has accounted for 11.2% of the film’s global box office on only a fraction of total screens.

“‘Avatar: The Way of Water’ is a global cultural event that is so special in IMAX, and we are making the most of that opportunity — driving record-breaking results across a diverse collection of markets from France to India to South Korea and far beyond,” said Rich Gelfond, CEO of IMAX. “‘Avatar: The Way of Water’ continues to play like so many James Cameron megahits before it, connecting with audiences across a wide swath of cultures with remarkable staying power at the box office.”

Through Monday, “Avatar: The Way of Water” has earned $75.7 million on IMAX screens in North America — the third highest IMAX Domestic box office performance ever.

“Avatar: The Way of Water” continues to gain ground in China, where IMAX screens have earned $47.6 million to date — good for a massive 23% of the Chinese box office on only 1% of screens. The film’s run in China was extended through next week’s Lunar New Year holiday, the perennial peak season for Chinese moviegoing. Four new titles will open in IMAX across China for the holiday, including China Film Group’s “The Wandering Earth 2”, Maoyan’s “Full River Red”, Enlight’s “Deep Sea” and Bona’s “Hidden Blade”.

“Avatar: The Way of Water” will continue to screen across IMAX locations in most global markets into February. Cameron and Disney/Lightstorm currently have three more films in the “Avatar” saga planned through 2028.

IMAX, an innovator in entertainment technology, combines proprietary software, architecture, and equipment to create experiences that take you beyond the edge of your seat to a world you’ve never imagined. Top filmmakers and studios are utilizing IMAX theaters to connect with audiences in extraordinary ways, and, as such, IMAX’s network is among the most important and successful theatrical distribution platforms for major event films around the globe.??Streaming technology company SSIMWAVE, an IMAX subsidiary, is a leader in AI-driven video quality solutions for media and entertainment companies.

IMAX®, IMAX® Dome, IMAX® 3D, IMAX® 3D Dome, Experience It In IMAX®, The IMAX Experience®, An IMAX Experience®, An IMAX 3D Experience®, IMAX DMR®, DMR®, Filmed For IMAX™, IMAX LIVE™, IMAX Enhanced™, IMAX nXos®, SSIMWAVE® and Films to the Fullest®, are trademarks and trade names of the Company or its subsidiaries that are registered or otherwise protected under laws of various jurisdictions. For more information, visit www.imax.com. You may also connect with IMAX on Instagram (www.instagram.com/imax), Facebook (www.facebook.com/imax), Twitter (www.twitter.com/imax), YouTube (www.youtube.com/imaxmovies) and LinkedIn (www.linkedin.com/imax).