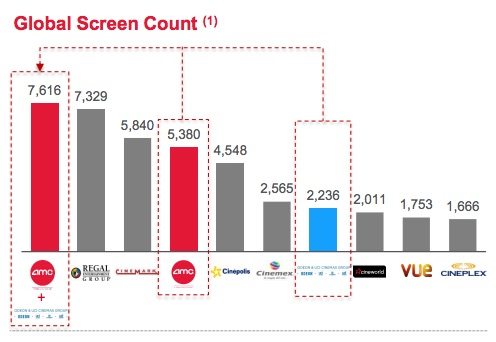 Combining both AMC and Odeon together, AMC now operates 636 theatres with 7,623 screens in eight countries, making it the largest movie exhibition company in the world.

“Today, with the official closing of AMC Entertainment Holdings’ purchase of Odeon & UCI Cinemas Holdings Limited, AMC today becomes the largest theatre exhibitor in the world,” said Adam Aron, CEO and President, AMC. “We now have an international footprint, and will introduce throughout Europe our proven guest amenities like plush powered recliners, enhanced food and beverages, and Dolby at AMC and IMAX at AMC premium experiences. We are excited about our prospects of transforming the experience in Odeon theatres for our new European guests, as they become part of our family of nearly 300 million movie goers across eight countries and two continents. Looking ahead, our goal is to not only be the largest theatre exhibitor in the world, but also the best.”

Aron added, “I would also like to take this opportunity to especially thank Guy Hands and his impressive colleagues at Terra Firma, one of Europe’s leading private equity firms and our counter-party in this transaction. It has been a privilege to work with them in transitioning Odeon into the world of AMC.”

With the change in ownership, AMC intends to change the organization’s name to ODEON Cinemas Group. There also will be a transition in leadership at Odeon Cinemas Group:

“We congratulate Paul Donovan on his successful leadership of Odeon,” said Aron. “He is a talented executive who has made a difference to the business. We fully understand that his ambitions lie in developing his career as a Chief Executive of a standalone enterprise, and are pleased that Paul will act as an advisor to AMC during the period of transition.”

Paul Donovan said, “It has been a real privilege to lead the transformation of the business over the last three years, and to play a role in achieving the sale of the company for Terra Firma to AMC. The company’s new owner has clarity of purpose, an ambition and an energy which means that our millions of guests across Europe can expect even better cinema-going experiences in the future.”

Commenting on the elevation of Mark Way and Ian Shepherd, Adam Aron said, “Mark Way has been a key member of the Odeon executive team since 2014, as it transformed the strategy and fortunes of the company,” said Aron. “Mark’s extensive experience as CFO, as well as the 17 years he previously spent within Hilton Worldwide, gives him a unique opportunity to assess and steer many of Odeon’s strategic developments and to ensure that those with the best levels of return on investment are prioritized. Mark will work closely with Ian Shepherd as Chief Operating Officer and the entire Odeon team. We have every confidence that they will brilliantly lead the implementation of AMC’s proven growth strategies in Europe.”

AMC also is currently in the process of acquiring US-based theatre exhibitor Carmike Cinemas, Inc. (NASDAQ:CKEC). Carmike shareholders have approved the transaction. Closing remains subject to customary conditions, including regulatory approval, and is expected to be completed by the end of 2016 or early 2017.

About AMC Theatres
AMC (NYSE:AMC) is the largest movie exhibition company in the world and the guest experience leader with approximately 636 theatres and 7,623 screens worldwide, including the largest cinema operator in Europe, Odeon Cinemas Group. AMC has propelled innovation in the theatrical exhibition industry and continues today by delivering more comfort and convenience, enhanced food and beverages, greater engagement and loyalty, premium large format experiences, and targeted programming. AMC operates the most productive theatres in the United States’ top markets, having the #1 or #2 market share positions in 21 of the 25 largest metropolitan areas in the United States, including the top three markets (NY, LA, Chicago). AMC, through its Odeon subsidiary, operates in seven European countries and is the No. 1 theatre chain in the UK & Ireland, Italy and Spain. amctheatres.com