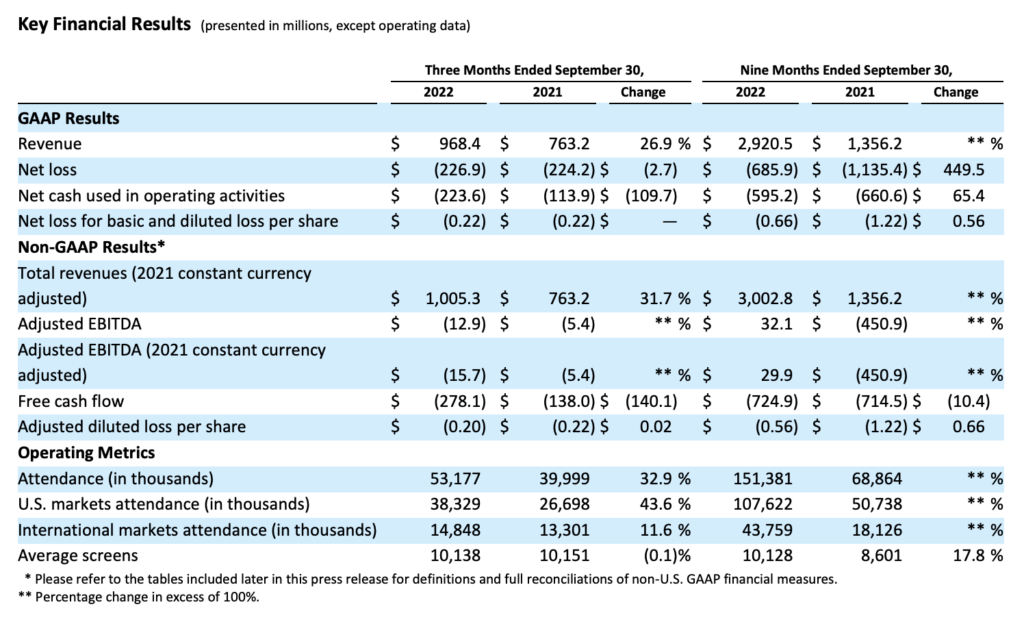 Adam Aron, Chairman and CEO of AMC Entertainment commented, “Exactly as anticipated and foreshadowed on our last quarterly earnings call, our third quarter results were impacted by a particularly soft industry-wide box office in the latter two-thirds of the 2022 third quarter, but encouragingly our overall per-patron metrics for both admissions revenue and food and beverage spending remain well above pre-pandemic levels, growing a sizable 12.0% and 30.0%, respectively, compared to the third quarter of 2019. Our recovery continues, and we look forward with enthusiasm to a return to a more robust film slate in the fourth quarter of 2022, which has already started strong with the release of “Black Adam”. That movie had the highest opening weekend box office of all-time for a film starring Dwayne Johnson. Successive blockbusters to be released in the fourth quarter include this coming weekend’s highly anticipated “Black Panther: Wakanda Forever”, whose advanced ticket sales have surpassed expectations, “Strange World” and “Avatar: The Way of Water”.

Aron added, “Beyond our ongoing operating recovery, AMC has been strengthened by our recent capital markets activities, notably debt reduction, debt refinancing, and equity capital raising. These actions bolster our agility and allow us to pursue strategic opportunities, like our recently announced Zoom Rooms at AMC, to transform our company in a post-pandemic environment. We expect to make more business development announcements in the coming weeks and months, which along with an improving movie theatre sector positions AMC Entertainment to create value for all our stakeholders.”

AMC and its Odeon subsidiaries used the proceeds from the offering, together with cash on hand, to fund the repayment in full of Odeon’s existing term loan facilities which had a principal amount of $471.1 million at September 30, 2022 (based on the currency exchange rates as of such date) and to pay related fees, costs, premiums and expenses.

This refinancing reduced the principal amount of our debt, based on currency exchange rates as of September 30, 2022, by $71.1 million, bringing the total principal debt reduction during 2022 to $143.6 million. This refinancing also extends AMC’s maturities by four years from 2023 to 2027.

Cash at September 30, 2022 was $684.6 million excluding restricted cash of $211.2 million. AMC currently has liquidity availability of $895.8 million (including cash and undrawn capacity under the Company’s revolving credit facility).

About AMC Entertainment Holdings, Inc.
AMC is the largest movie exhibition company in the United States, the largest in Europe and the largest throughout the world with approximately 940 theatres and 10,500 screens across the globe. AMC has propelled innovation in the exhibition industry by: deploying its Signature power-recliner seats; delivering enhanced food and beverage choices; generating greater guest engagement through its loyalty and subscription programs, web site and mobile apps; offering premium large format experiences and playing a wide variety of content including the latest Hollywood releases and independent programming. For more information, visit www.amctheatres.com.