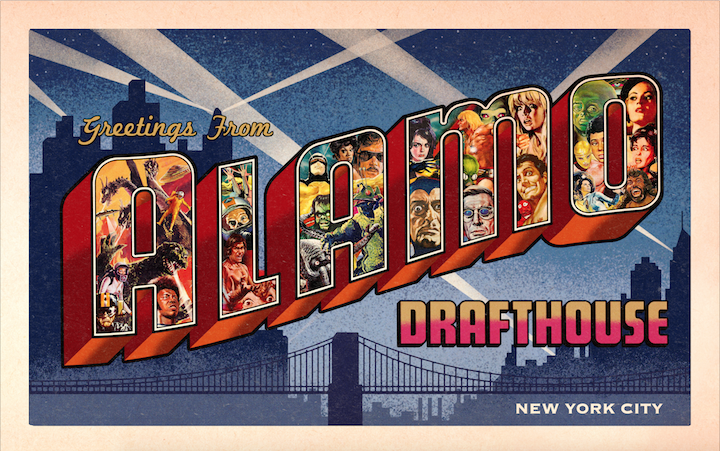 “Don’t hang around and let your problems surround you, there are movie shows … downtown.”

During the “soft opening” period running through October 21st, guests will receive special discounts on select food and non-alcoholic beverages while staff trains and gets up to speed. Occupying 37,000 square feet on Floor 2B beneath the landmark 28 Liberty Street building in the Financial District, the 14-screen, 578 seat theater is the company’s third New York-area location after Yonkers (2013) and Brooklyn (2016), and the very first in Manhattan. It opens ahead of a string of new Alamo Drafthouse locations due late this year or 2022 in Washington, DC; Arlington, VA; St. Louis, MO; and a Staten Island theater boasting a kung-fu themed video store and bar co-designed and curated by Wu-Tang Clan founder RZA.

“The last eighteen months have been a rollercoaster for our industry, but through it all we’ve believed in the future of this industry,” says Alamo Drafthouse CEO Shelli Taylor. “Opening our Lower Manhattan theater is an expression of our belief that audiences will always seek elevated, communal moviegoing experiences like ours.”

Alamo Drafthouse Lower Manhattan opens amidst an incredible resurgence in the cinema industry that’s seen “No Time to Die”, “Shang-Chi: The Legend of the Ten Rings”, and “Venom: Let There Be Carnage” open to massive box office success, and just in time for the opening weekend of David Gordon Green’s return to Haddonfield in “Halloween Kills”, Ridley Scott’s action epic “The Last Duel”, and the acclaimed new drama from IFC, director Mia Hansen-Løve’s “Bergman Island”. The coming weeks at Alamo Drafthouse Lower Manhattan will be see a string of major releases like Denis Villeneuve’s “Dune”, Wes Anderson’s “The French Dispatch”, Edgar Wright’s “Last Night in Soho”, and Chloe Zhao’s “Eternals”.

The Press Room
A museum, a letterpress print shop, a bar, and a private event space all-in-one, The Press Room is a brand new bar concept that’s located within Alamo Drafthouse Lower Manhattan.

Like the century-old wax figure exhibits thoughtfully curated and delicately displayed throughout Alamo Drafthouse Brooklyn’s House of Wax, The Press Room displays selections from a vast archive of over 60,000 letterpress film advertising plates spanning the 1930s through the 1980s. But this collection will also come to life – The Press Room’s 1938 Vandercook letterpress will be inked and ready to be fired up for special screenings with limited edition greeting cards, private events, and classes for anyone wishing to learn the resurgent art of letterpress printing.

In addition to a tap wall of 48 draft beers, guests will be able to customize their own bespoke cocktail or choose from a list of original craft cocktails designed by Alamo Drafthouse NYC Bar Manager, Vince Favella. For more info about The Press Room – including a sneak peek at the menu – visit thepressroom.bar.

Alamo Drafthouse Lower Manhattan Signature Programming
Alamo Drafthouse’s programmers have curated a limited series of films drawn from each decade of the past century of films set in and about New York City. “Lights of New York” – a nod to the 1928 film that’s been thought of as the first full-length, all “talkie” film – highlights what’s always been special about New York as a setting for tall tales, epic evenings out on the town, and street-level stories of regular New Yorkers.

And because it’s that time of year, Alamo Drafthouse’s signature holiday programming is just around the corner, kicking off with the much-beloved “Elf” Movie Party, followed by perennial holiday favorites like “Planes, Trains, and Automobiles”, “National Lampoon’s Christmas Vacation”, “Love Actually”, “A Christmas Story”, “The Polar Express”, “Gremlins”, “Scrooged”, “Batman Returns”, “Meet Me In St. Louis”, and “It’s A Wonderful Life”, as well as genre favorites that include “Black Christmas” and “Dial Code Santa Claus”, and the LGBTQ+ modern classic “Carol”.

Additionally, Alamo Drafthouse protects the theatrical experience with a zero tolerance policy for people who disrupt the film with talking or texting. Alamo Drafthouse’s “Don’t Talk” PSAs have frequently received national attention, and have featured former Texas Governor Ann Richards, Jeff Goldblum and a velocirator, Georgie from “IT”, “The Room” director and star Tommy Wiseau, and one very angry voicemail.

About Alamo Drafthouse
Alamo Drafthouse Cinema was founded in 1997 as a single-screen mom and pop repertory theater in Austin, TX. Twenty-four years later, with 38 locations and counting, Alamo Drafthouse has been called “the best theater in America” by Entertainment Weekly and “the best theater in the world” by Wired. Alamo Drafthouse has built a reputation as a movie lover’s oasis not only by combining food and drink service with the movie-going experience, but also introducing unique programming and high profile, star-studded special events. Alamo Drafthouse created Fantastic Fest, a world-renowned film festival dubbed “The Geek Telluride” by Variety. Fantastic Fest showcases eight days of genre cinema from independents, international filmmakers, and major Hollywood studios. Alamo Drafthouse’s collectible art gallery, Mondo, offers breathtaking, original products featuring designs from world-famous artists based on licenses for popular TV and movie properties including Star Wars, Star Trek & Universal Monsters. Alamo Drafthouse continues to expand its brand in new and exciting ways, including the American Genre Film Archive, a non-profit film archive dedicated to preserving, restoring and sharing film, and Alamo On Demand, a new VOD platform boasting a growing and carefully curated library of entertainment for rental or purchase