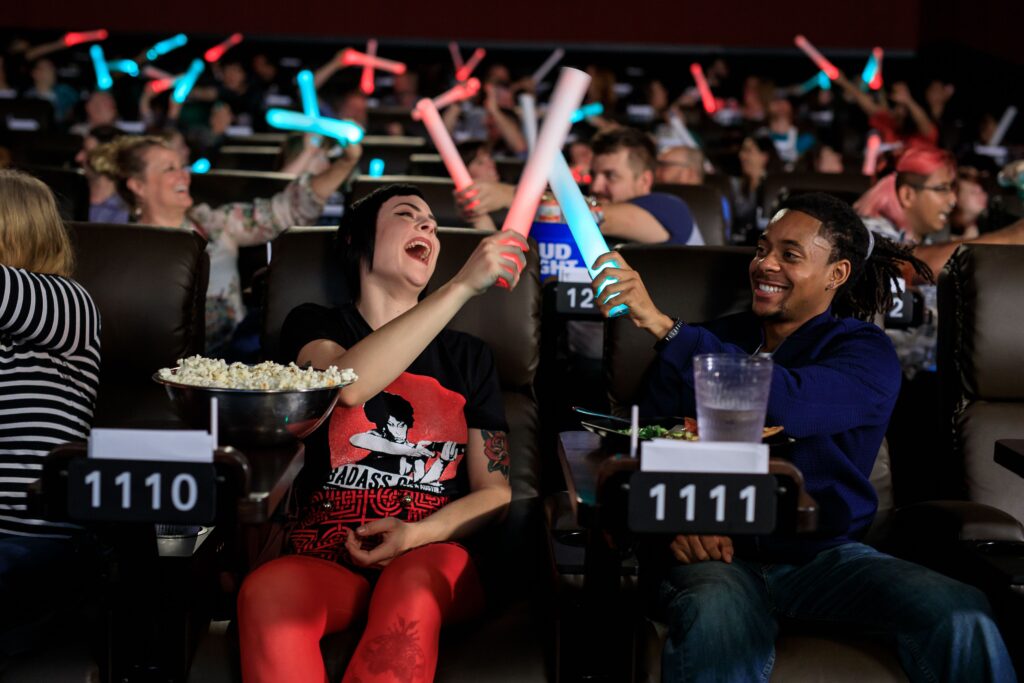 Tickets are available for purchase now at drafthouse.com and the Alamo Drafthouse mobile app with the cinema company’s signature mix of new releases and classic films available. Through February 5th, guests will be welcomed into the new cinema with a 25% discount on food and non-alcoholic beverages.

Across from Wrigley Field in Wrigleyville at 3519 N Clark St. (at Addison), on the third floor, the 6-screen, 372-seat theater is the company’s first location in Illinois. Crisp, bright picture, and eardrum-rattling sound are table-stakes at all Alamo Drafthouse locations, and Wrigleyville is no exception. All theaters will be equipped with state-of-the-art Cinionic 4k laser projectors and immersive Dolby surround sound for the best film presentation in the business. The theater is easily accessible by car with metered street parking and $10 validated garage parking, and is only a five minute walk from the Red Line and a less than a 10 minute walk from the Brown and Purple Lines. The new location will also house Video Vortex, a standalone cocktail bar with an actual video store (11,000+ curated VHS, DVD and Blurays are available to rent for free.) Video Vortex also features retro video installations by the art collective Media Pollution. Video Vortex is a love letter to the video store culture of the ‘80s and ‘90s that fostered the cinema company’s love of film and will feature trivia, music and other radical events and parties.

“Alamo Drafthouse Wrigleyville is something we have been looking forward to for a very long time,” says Alamo Drafthouse CEO Shelli Taylor. “This is our first theater in Chicago, a city with a storied movie history, and our first ever in Illinois. We’re thrilled to be here, and we’re excited to show Chicagoans everything we have to offer to the cinema experience.”

Alamo Drafthouse Wrigleyville is committed to celebrating everything that makes Chicago unique, and that starts with its location in the historic Wrigleyville neighborhood.

“Wrigleyville has always been associated with local Chicago pride and we want to add something incredible to the neighborhood and all of Chicago,” says Alex Shebar, Community Marketing Manager for Alamo Drafthouse Wrigleyville.

Alamo Drafthouse Wrigleyville opens amidst the continuing resurgence of the cinema industry that’s seen BLACK PANTHER: WAKANDA FOREVER and AVATAR: THE WAY OF WATER perform strongly throughout the holiday season, and just in time for the latest chapter of the Marvel Cinematic Universe, ANT-MAN AND THE WASP: QUANTAMANIA. Alamo Drafthouse Wrigleyville is also committed to celebrating and empowering independent films such as TRIANGLE OF SADNESS and DECISION TO LEAVE, the two most recent Drafthouse Recommends films, the label they place on innovative and ambitious films that they think Alamo Drafthouse audiences will love.

With a name like Drafthouse, it makes sense the cinema-eatery would include a world-class standalone bar. Video Vortex is the theater’s unique cocktail bar concept celebrating the video rental store culture of the ‘80s and 90s. The retro-themed design features art installations with video screens playing VHS clips and VHS-themed decor. The bar will feature an extensive menu of custom and classic cocktails along with 32 beer taps focusing on the thriving local craft beer scene. The back bar will also be available to host small events, parties, and even film screenings on giant screens that cover the walls.

In addition to its drink options, Video Vortex will feature an extensive collection of 11,000+ DVDs and Blu-rays available to rent for free, along with 200 VHS tapes, expertly curated by the Found Footage Festival, Midnight Rental, and Chicago’s own Bric-A-Brac Records and Strange Tapes Zine. Any guests who haven’t held onto their DVD player or VCR will be able to rent one for a small fee.

Alamo Drafthouse Wrigleyville will also continue the exhibitor’s long tradition of repertory programming and memorable live events. Guests can look forward to interactive Movie Parties of classic films complete with games and props, such as their famous ELF Movie Party which saw guests packing theaters throughout the holiday season, brunch screenings with a specialty menu of mid-morning favorites, specialty series like Terror Tuesday and Weird Wednesday celebrating the best of genre filmmaking, and Live Q&A events including a special Wrigleyville opening night advance screening of Prime Video’s SOMEBODY I USED TO KNOW with Dave Franco and Alison Brie in attendance. Alamo Drafthouse Wrigleyville will also celebrate Chicago’s storied cinematic history with plans to screen classic films like FERRIS BUELLER’S DAY OFF, THE BLUES BROTHERS, and even a Michael Mann double feature.

To further commemorate the occasion, Alamo Drafthouse Wrigleyville is giving a few lucky Chicago cinephiles a chance to win some exciting prizes including tickets to an invite-only, VIP Grand Opening event before the theater opens to the public and a year of unlimited free movies through Alamo Drafthouse’s monthly subscription service, Season Pass. For a chance to win, simply follow any of the Alamo Drafthouse Chicago social channels (Instagram, Facebook, Twitter). Full terms and conditions can be found at https://drafthouse.com/news/wrigleyville-grand-opening-sweepstakes.

Founded in 1997, Alamo Drafthouse has been heralded for unique programming events, great food and drinks, and high exhibition standards, earning accolades including “Best Theater Ever” by Time Magazine and “The Coolest Theater in the World” by Wired. A September 2018 Market Force Information survey of nearly 13,000 moviegoers across the country gave Alamo Drafthouse the #1 ranking for Favorite Movie Theater, Best Service, and all food and beverage-related categories.

Additionally, Alamo Drafthouse protects the theatrical experience with a zero tolerance policy for people who disrupt the film with talking or texting. Alamo Drafthouse’s “Don’t Talk” PSAs have frequently received national attention, and have featured former Texas Governor Ann Richards, Jeff Goldblum and a velociraptor, Georgie from IT, THE ROOM director and star Tommy Wiseau, and one very angry voicemail.