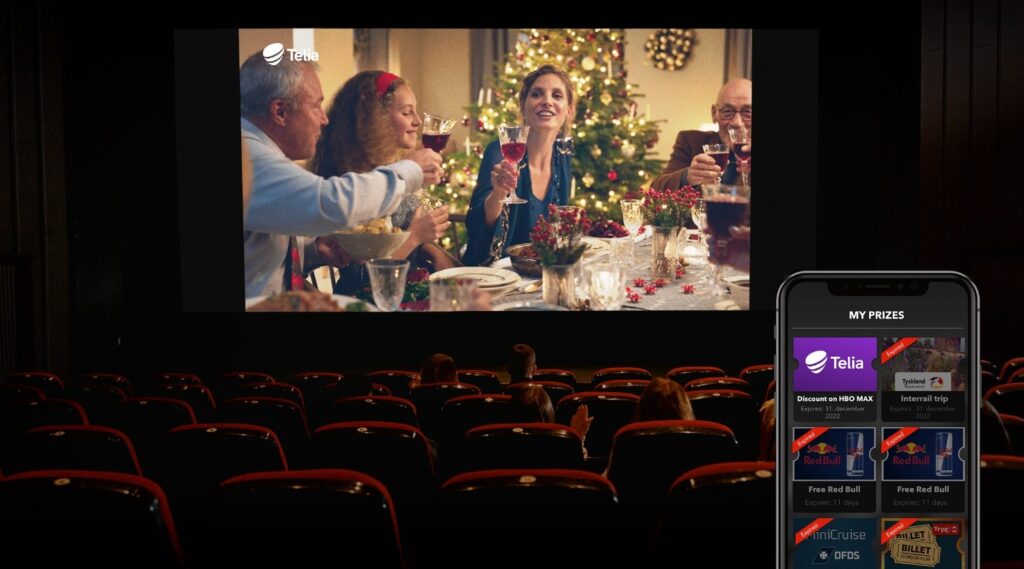 Since the beginning of the century most traditional media have transformed their offline formats to new digital formats and integrated with the programmatic advertising eco-system.

As one of the last media channels, cinema has still to offer advertisers a digital version of big screen advertising with the same opportunity for advertisers and agencies to leverage audience data and target campaigns as they do on all other digital media.

More than 65% of global media spend is digital and the share is growing year on year. Cinema’s share of digital media budgets has until today been non-existing, but by making digital profiled cinema inventory accessible to the programmatic ecosystem, this is now changing.

On December 1st the first addressable cinema campaign was launched at Nordisk Film cinemas in Denmark for the Nordic telco brand, Telia. The Telia ad is shown on the cinema screen and simultaneously a Telia voucher is sampled among the audience to drive low funnel conversion.

A condition for programmatic – and addressable – advertising is real time data profiling of the individual or the audience to be exposed. As cinemas so far have not been able to provide real time data for profiling the audience at each show, this has been a barrier for the development of a digital offering of cinema inventory. Further to this the cinema advertising format is a closed DCP video format not directly compatible with regular advertising video formats which again has been yet another barrier for cinemas to attract digital advertising spend.

Telia’s new addressable cinema campaign is launched on a platform developed by the Danish media tech company Cinemataztic. The platform is served outside the closed DCP format and is compatible with most digital video format. The Cinemataztic platform collects and processes audience data in real time and will deliver estimated profiles for each cinema audience. Each addressable cinema campaign will be targeted based on a real time audience by audience profiling with a sample of 10-15% of each audience.

If the audience profile matches the advertiser’s target then the ad will be played and impressions registred on the campaign. Further to this – everyone in the audience with the CineGame app receives a voucher in the app wallet from the advertiser immediately when the ad is shown on the cinema screen.

The new platform will offer advertisers and agencies to plan, launch and optimize digital cinema campaigns via Cinemataztic’s own trade desk – and potentially also via existing demand-side platforms.

“It’s pivotal for us to be able to plan, book and evaluate cinema like all other digital media that we are investing in. With addressable cinema the cinema media will be fighting for its fair share of our digital budget side by side with social media, display media etc.” Andreas Peter Madsen, Digital & Performance Manager at Telia

The launch of addressable cinema in Denmark is a colaboration between Cinemataztic and Dansk Reklame Film and the release is version 1 out of 4 of the platform development. The platform will also be launched with FinnKino cinemas in Finland in 2023 and the finale version is expected to be released in 2024.

“The transition from linear TV to addressable TV has yielded a price premium on the TV advertising CPM. Obviously we still do not know how addressable cinema will work for the cinema industry, but we do expect this targeted product to sell at a higher CPM than our traditional linear products and so far we have seen a strong interest from advertisers and agencies.”
Carsten Ellemo Trillingsgaard, CEO at Dansk Reklame Film