Mental health. Two words that carry significant weight in terms of affecting how well we function in life. But, until more recent years, these two words haven’t been taken anywhere near as seriously as, say, our physical health. And for some, a sizable stigma is still attached to the topic. But we all, at some point in our lives, suffer with our mental health, whether that’s because of our relationships, work stresses, experiencing bereavement or a myriad of other “human life” reasons.

The UK-based Film & TV Charity is an organisation supporting those working behind the scenes in these creative industries in a number of ways, with mental health being one of the topics they seek to assist with. Lucy Powell, the charity’s Community Support Lead, not only has professional experience in this space but, as someone who’s experienced personal trauma and struggles, she’s a passionate advocate of openness, honesty and getting help when it’s needed.

For those who don’t know, can you tell us a bit more about the Film & TV Charity as an organisation?
Yes, in short the Film & TV Charity supports everyone in film, TV and cinema working behind the scenes. Our industry is powered by talented, skilled and creative people, but it can be an industry of tremendous highs and lows, due to various factors. As an organisation we’re here to support them however we can throughout their careers.

We used to be called the Cinema and Television Benevolent Fund, but when our CEO Alex Pumfrey was appointed in 2017 we became a charitable organisation and were renamed [to the Film & TV Charity]. Soon after this, Alex introduced our 24-hour confidential Support Line for the industry. Anyone can call or use the chat service for a listening ear if you want to talk. You can also access free services like counselling, our Bullying, Racism and Harassment Advice Service, or financial and legal advice. Whether it’s a personal or career challenge that you may be facing, we’re here for you.

We’re only able to do this because of the donations we receive from the generosity of individuals and companies across the industry. We often find people who have benefited from our free support really want to find a way of giving back.

What’s your role for the Film & TV Charity, and what does it entail?
My role as Community Support Lead is to provide wellbeing support tools and resources for people working in film and TV, and to help build better industry connections and ways for colleagues to support each other, both online and in person. My role has been created as part of The Whole Picture Programme which is a two-year urgent response to the industry mental health crisis uncovered in the charity’s Looking Glass Research [more on this shortly] in 2019.

Everything we do is co-designed and developed with industry partners and people working behind-the-scenes. I am currently developing an industry-wide peer support strategy and bespoke self-help resources to support the mental health and wellbeing of freelancers, specifically for those working in TV and film. We’ll be launching a Freelancer Wellbeing Hub on our website in October where you can access these tools and resources.

Can you talk to us about your own experiences with mental health that made you want to focus your career on this area?
Throughout my life I have experienced the effects of poor mental health and mental illness, either through my own experiences or through those of close friends and family members. I lost my dad to suicide when I was in my twenties whilst I was working in film and TV, and I experienced crippling anxiety and depression throughout that period. When you go through something like that, it really brings it home that this could happen to anyone, no matter how capable you are professionally, no matter how ‘together’ or how outgoing and bubbly you may seem.

I’ve had to be signed off work due to mental illness and burnout a couple of times in my career. I was working all hours at a pace that was not sustainable. The symptoms manifested in both emotional and physical ways. I remember one week where I had as little as nine hours sleep – for the whole week. My nervous system was a mess and I felt like I was going completely mad. That is a very lonely feeling.

This is a brilliant industry full of lovely, kind people that really feels like a community that pulls together when the going gets tough. But our research, and my personal experiences, have shown that there are elements of its working culture and conditions that do not support good mental health and diverse needs. This has made me incredibly passionate about improving mental health, trying to overcome the stigma around it, and trying to do what I can to make a fairer, more supportive industry for everyone working in it now, and for future generations. 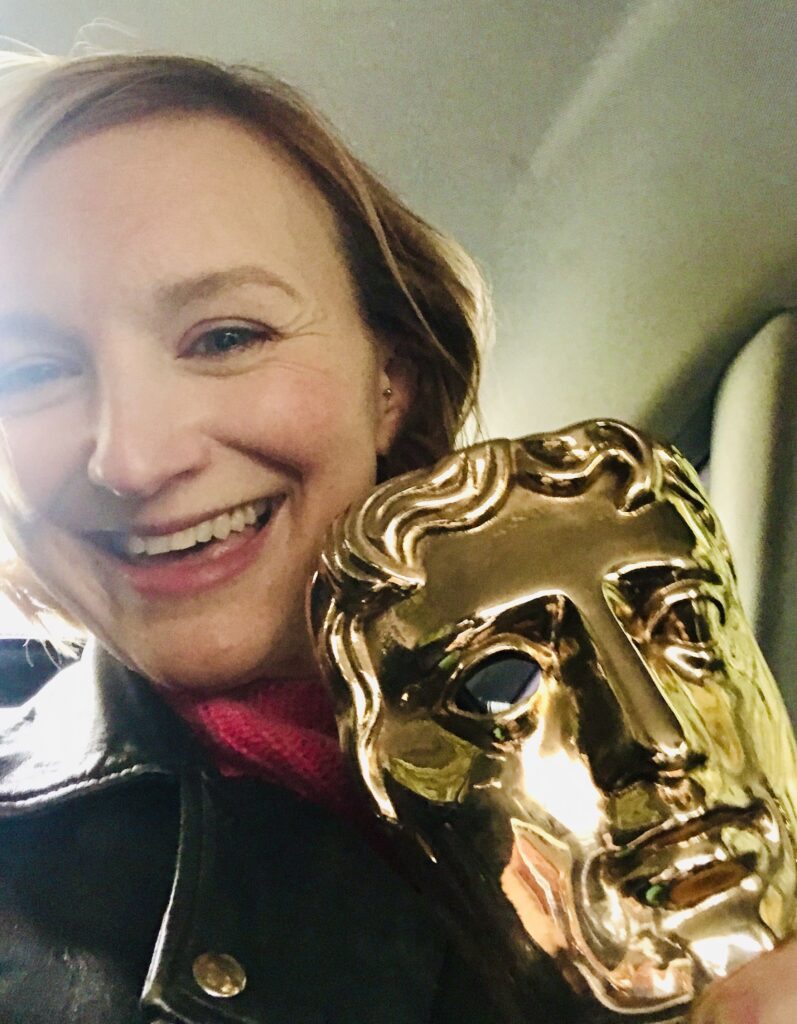 You mentioned the “Looking Glass” research, commissioned by the Film & TV Charity in 2019. What was its objective and what were the findings?
In 2019, amongst growing concerns about mental health problems in the industry, we commissioned research looking at the working culture and experiences of people who work in film, TV and cinema. The objective was to assess how prevalent mental health problems are, and to explore whether there are particular challenges specific to the industry. The research revealed 87% of those interviewed had experienced at least one mental health problem, compared with the UK national average of 65%. More than 50% of workers behind-the-scenes in film and TV had considered taking their own lives, compared with 20% nationally.

Analysis of the underlying causes of this crisis revealed three areas of the industry that correlate to poor mental health outcomes; 1) conditions of work, 2) the industry’s culture, and 3) its capability to provide support for those who need it.

Working conditions included long working hours, and lack of control over the hours worked, with work affecting personal relationships, and peoples’ ability to make plans with friends and family. Experiences of bullying and harassment were very high – 82% of respondents had witnessed or experienced bullying. And it showed there is not currently enough support or resources to support the workforce – and that there are still huge barriers towards seeking support; a worrying example of this is that only 2% of freelancers would go to their line manager about a mental health problem.

It’s also important to point out that freelancers and those facing additional barriers in the industry such as women, carers, disabled people, LGBTQ+ people and Black, Asian and minority ethnic people are more likely to be exposed to these mental health risk factors.

In your role you’re focusing on two key strands – isolation and peer support – which were borne out of the Looking Glass research. Can you elaborate on these areas?
The goal with the work that I’m leading on is to tackle the common experiences of isolation that our research revealed. We found that people working behind-the-scenes often felt left out, lacked company and felt isolated. The research showed that this is keenly felt by freelancers, carers and people from Black, Asian and ethnic minority backgrounds. But this is also generally very common in our industry. Research suggests that feeling lonely can have an impact on your mental health, especially if it lasts for a long time.

32% of our Looking Glass research respondents felt they would benefit from better peer support at work. And for people from Black, Asian and ethnic minority backgrounds this was 42%. The mental health charity Mind has done lots of research in this area and there is an increasing body of evidence that shows peer support can improve a person’s sense of wellbeing, their ability to connect with others, increase their sense of hope and positivity and improve their ability to make decisions and take action.

We believe peer support should be one of the many avenues of support available to people working in our industry. And we will be launching a pilot grants scheme towards the end of the year that funds new and existing peer support projects, with the objective of improving wellbeing and a sense of community within the film and TV industry.

Tell us a bit about RED January and how you got involved?
RED January is a community movement, to encourage people to get physically active every day in January (and beyond) to support their mental health. The initiative was founded by an ex-colleague and dear friend of mine, Hannah Beecham, after she witnessed the transformative effect regular exercise had on her Mum as she recovered from a period of severe depression.

I got involved a few years ago, volunteering my time to support the growth of the community movement, by developing our PR, comms and community engagement. We partnered with the mental health charity Mind, and the community raised millions for their life changing work. I was lucky enough to move into a paid position with the charity so I could focus on this work full time, and it was such a rewarding experience.

The community has grown to well over 200,000 “REDers” [those who get involved with RED January] who get active and support each other in January and beyond. For anyone who would like to take part in 2022, registration opens on Monday 4th October 2021: https://redtogether.co.uk/red-january/ 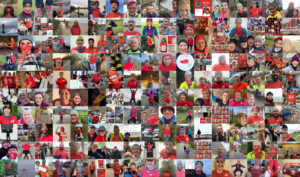 What advice do you have for anyone struggling with their mental health, in the exhibition or wider film industry?
Almost nine in 10 people working in this industry have experienced a mental health problem. You are not alone. Please know that support is out there for you, and it is helpful to get support early on if you can. Whether that’s talking to a friend or someone you trust, calling the Film & TV Charity Support Line for free on 0800 054 0000, or speaking to your GP.

If you are feeling unsafe or in crisis, please seek urgent help. Below are links to emergency services and mental health crisis services, plus info on what they do and when to call.

Encourage your friends and colleagues to make use of our services and resources. To stay up to date on industry support and services follow us on social media @FilmTVCharity
Find out the ways you can support our work and the wider film and TV community here; https://filmtvcharity.org.uk/support-our-work/