With the banner, “Because you’re tired of watching movies on your laptop” boldly displayed across its homepage, Cinema Treasures is the world’s largest guide to all things movie theater. Now in its 20th year and listing over 53,000 venues and growing, CT is the red hot core of knowledge for movie house fans. Want to know what venues around the world are closed, open, demolished, available or pretty much anything else? You’ve come to the mecca of photos, information – and memory.

Ken Roe, Ross Melnick and Patrick Crowley are the Three Musketeers of the Movie House – passionate, dedicated men who work on a volunteer basis around the clock to keep the information up to date. With Roe based in London, Melnick in Los Angeles and Crowley in San Diego, they’ve built and maintain a crowd-sourced wiki-before-wiki trove with worlds of information about movie theatres – intel you can’t find anywhere else.

Spurred on by David Naylor’s book “The Great American Movie Theaters”, Melnick and Crowley had an idea in 1999. “Patrick, and I started talking about how to create a site [like that book but] that would actually allow people to update the website. We started this in October 1999, mostly on weekends. By February 2001, [there was] a cover story on us in The Hollywood Reporter, and that got us some early coverage.” Then Ken Roe got in touch. “We’re thrilled and amazed to have Ken. There is probably no one on this planet I would want to talk to  more if I needed any information on a movie theatre living or extinct than Ken. He came to us out of the blue.” Ken is the theatre editor who works on all the content. Patrick has built the site. Melnick is the film and media historian.

“I’ve been involved with cinema since I was 21,” Roe says. “Now 76 coming up. By going to the cinema, I used to go every evening and sometimes twice a day on matinees. I worked in cinemas as a manager. For many years for the Rank Organisation, the Odeon chain started and became the manager of a 3,000 seats cinema up in Liverpool,” he says. But he always wanted to work in London – and so he did, including live theatre, all over the capital. “I’ve done the whole thing you know. With Rank you actually learn to do everything. You spend two weeks taking the ice cream tray around, a month in the projection box, two weeks with the cleaners. You so you can run a cinema on your own. And I love every minute of it.” 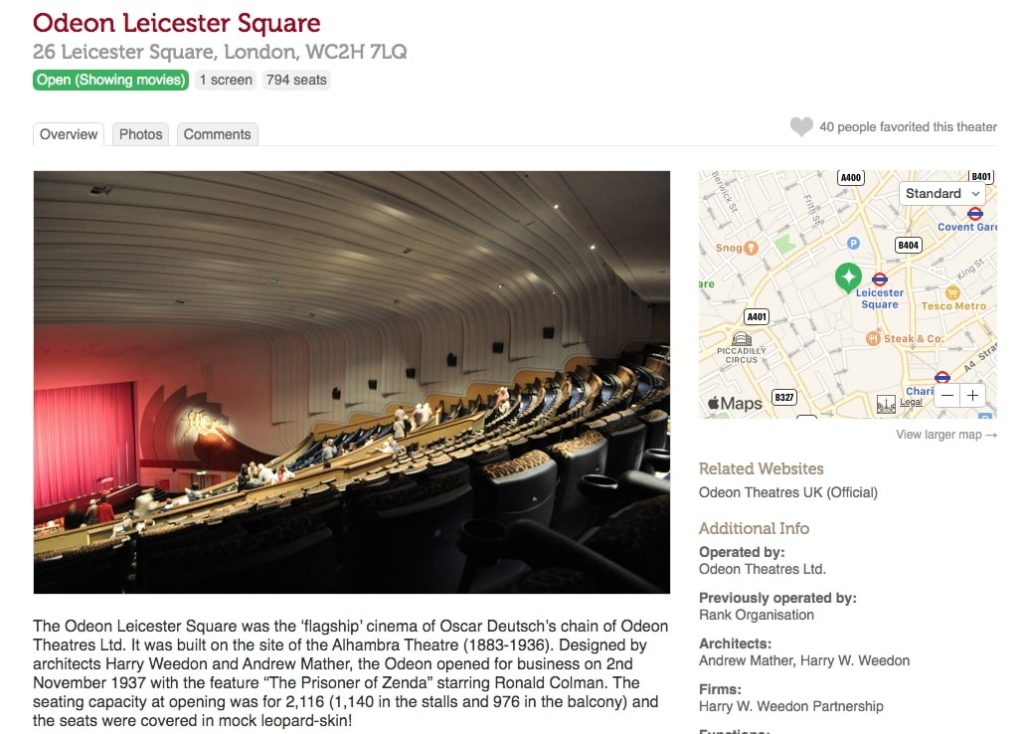 Built from scratch by Crowley, CT has grown as people started to add to it. The search mechanism is intricate. “Everyone has a favourite theatre they go to often,” says Crowley. “People are attached to shared experiences they hold. Our users have the ability to flag photos. It’s designed where everything you upload is going to fit into a certain context. That could be just your neighbourhood, just your city, just your state. There are all these ways of browsing our database.” It’s not just broad information but also specifics of seat number, architectural style and screen size as well as year and other minutia. While the site itself is in English there are tremendous contributions from people around the world in every continent. Comments from the west coast land in London in the morning, so the sun never really sets on CT.

“We are a social network, the site and our social media, for people who are desperate to get back into movie theatres,” says Melnick. “People are commenting more than ever right now and updating the site because they’re trying, in their mind, to keep these theatres alive. We’ve never seen anything like it. We’re finding a lot more comments coming through since the lockdown. I think people are rummaging through boxes, finding old photographs that they took many years ago, and posting those on the site as well. They feel like part of the community. They’re talking to each other. And it’s all very inspiring.”

“We have comments about going to movie theatres in the 1930s 1940s and 1950s. It’s an incredible collection of people who said, ‘I managed this place in 1965. This is what it was like when I was a kid in 1942.’ By starting early, we were able to capture the memories of people who, unfortunately, are gone. We’re preserving not just the data, but it’s also the memories.” That unique information can be popular with filmmakers too. When Peter Jackson was making “King Kong”, the filmmakers literally wanted to talk to some of CT’s users about their memories and knowledge.

Movie theaters are only just beginning to open up now after global lockdown. Some may remain shuttered. But cinema didn’t reach the ripe old age of 125 without seeing off some challenges. Part of its popularity is based on our behaviour. “People are going to want to go to that third place. That’s not their house, not their job,” says Melnick. “A report by NATO concerning small town theatres said that if [for example a] theatre in South Dakota closes, that [could mean] there isn’t another for 50 miles. There, we’ve lost an entire generation of moviegoers – people who don’t see it in the cinema, then DVD then online… Movie theaters are a communal space. They are the last secular institution. We don’t all go to the same mosque, synagogue, church, same sports or even the city hall. People gathering together from a wide variety of backgrounds are still gathering in the movie theater – that one space – to see one kind of entertainment. That’s why Cinema Treasures is still collating information from people who are remembering this kind of entertainment. 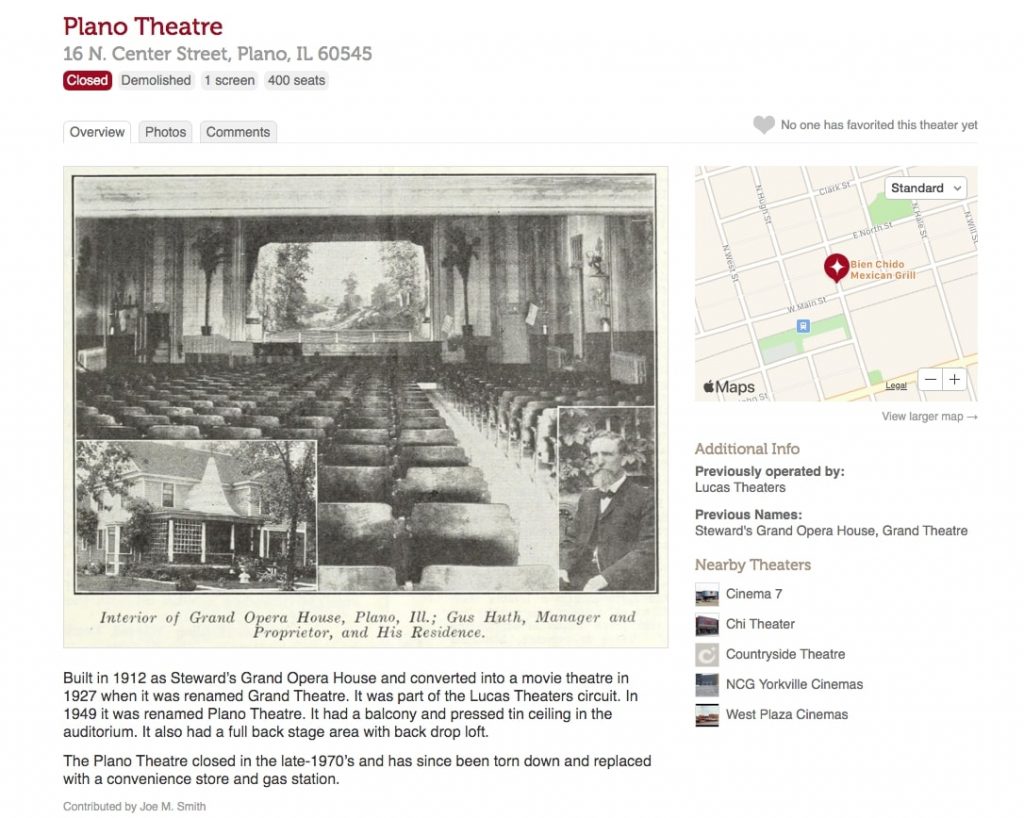 So, I tested CT’s search capabilities. Every week, my family would go a movie theatre in a small town. On the site Cinema Treasures, I found this memory of my first big screen:

“This was where I learned to be a projectionist… One Sunday afternoon my little brother, Jeff at 9 years old came to the Matinee. I took him up to the booth to see how the projectors operated. You should have seen his wide eyes. He watched part of the movie form the booth. I had to run all day and later that evening I heard the fire sirens go off. The theatre being only about 150 feet from the fire station made the siren sound come right down the exhaust for the lamps. When I got home that night I walked into the house to find my mother crying. My little brother was hit by a freight train and killed. So the last place I saw my brother was at the Plano… The Plano is gone now and I cannot as of this day drive down 16 North Center Street in Plano without getting very emotional. I just hope that all theatre people out there can love their theatre as I have loved the Plano.” [carbonarcboy, comment from 2009]

Finding this memory from a person who certainly projected some films I’d seen as a child was startling. I was sure that I’d made up that cinema as when I sought it out in real life only recently, there was no trace of it. But no, the place where I’d watched a terrible Jerry Lewis movie through the hole in a saltine cracker – my parents did know my eyesight was so poor at that point – did exist. Thanks to the diligence of CT, an important part of my cinematic past has been restored.

“Gene Siskel, the great film critic, once said, ‘You look down at television but when you look up at a film. It’s reverential,” says Melnick. “You stand back and you let it do something to you.” That’s what CT has been doing for 20 years – preserving the long memory of the picture palace. 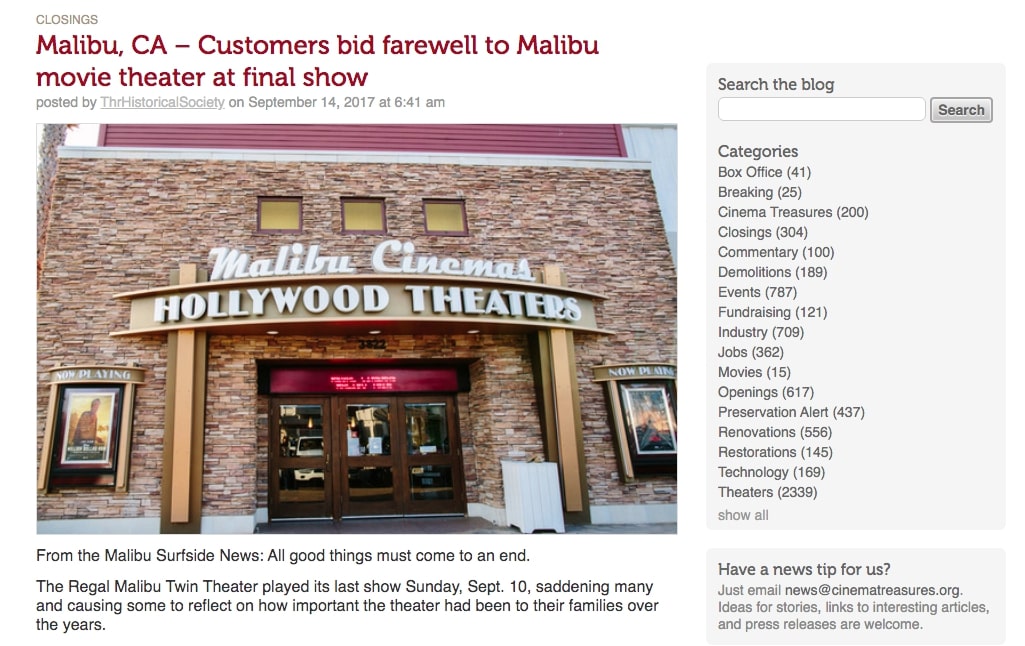