Worried About Face Masks in Cinemas? Ask About HVAC Instead

As cinemas re-open, people have been understandably concerned about the issue of wearing masks within cinema interiors. But are we missing a bigger factor in potential transmission of the Coronavirus, that is the HVAC or heating, ventilation and air conditioning systems that pump and often re-circulate air throughout theatres and multiplexes?

Reopening cinemas amid the coronavirus pandemic should be straightforward. Cinema owners and managers should follow government guidelines which follow “the science”. Social distancing, face-shields, crowd-limitation and spatial seating all seem logical. However, COVID-19 is a novel virus with possibly unforeseen ramifications. This means new kinks in the road for those who run cinemas as well as the moviegoing community. Like theatre lovers, sports fanatics and gym-goers, everyone longs to get back to what they were doing pre-COVID. All but the keenest are quoting Dorothy in the Wizard of Oz: “I’ve a feeling we’re not in Kansas anymore.”

Scientists are still advising people who are vulnerable to stay isolated, which, anecdotally, appears to affect those ultra-wary of illness as well. Staying in our caves is unsustainable, as lockdown has shown. For those who love movies, nothing compares to a big screen. As one pundit said, “There is no such thing as a memorable Netflix experience.” While watching “Annihilation” on Netflix, thoughts run to, “Wow, this really needs to be seen on a big screen.”

Theatrical movies feature incredible stories that are larger than life but now a team of psychics couldn’t predict its future. The American domestic front is fractious, drive-ins are popping up to take the strain. China’s new outbreak has shuttered its auditoria. Korea and Taiwan, countries which tracked and traced COVID cases, are seeing increased custom. New Zealand has also reopened. Sweden never closed. The UK posed to open on July 4th with the tentpole “Tenet” tentatively re-scheduled for August 12th, after moving it earlier to July 31st. But there is still no unified global opinion about exactly what to do and when. 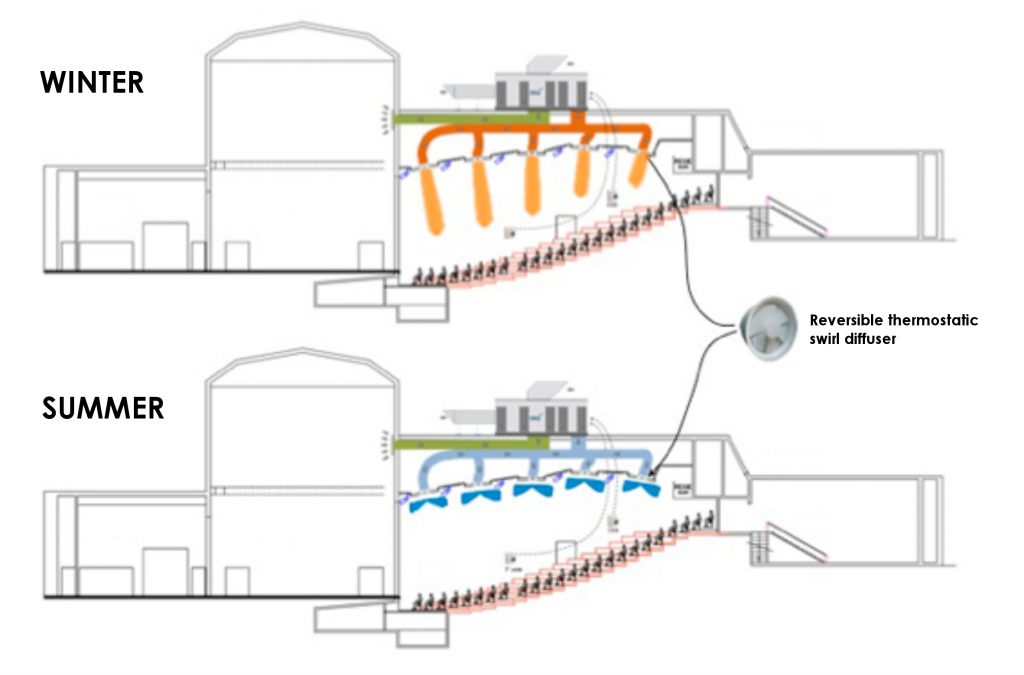 Winter or summer, HVAC is always in use in cinemas. (image: ETT)

One issue is face masks. As Yoda said, “Do or not do. There is no try.” Wear one? Don’t wear one? Wear one incorrectly?  Citing the clanger of AMC Theater CEO Adam Aron, who first said that their cinemas won’t require masks for patrons upon reopening because they didn’t “want to be drawn into a political controversy” social media went wild, with some commenters proposing a boycott of the chain. Suggestions were that only in America is wearing a mask political and that Democrats might wear masks whereas Republicans won’t. Aron and AMC quickly recanted.

Alamo Drafthouse, specialists in doing the right thing, stated, ”When we open, the safety of our teammates and guests cannot be compromised. This is not political. We will require that guests wear masks at the theater (except when eating/drinking). Those without a mask will be given one.” The U.K. Cinema Association guidelines suggest, “While employers are asked to support workers in wearing face coverings if they choose to wear one…face coverings are optional in the U.K. and not required by law for the workplace.” Cineworld UK staff have petitioned to make audience masks non-negotiable.

Then there’s this little thing called air. French producers and artists cried foul when they noticed social distancing between unrelated ‘bubbles’ of people was fine for trains and planes but not in the cinema. Culture minister Franck Riester replied, “There are ventilation devices in TGVs and in planes that make it possible to renew the air much faster than in confined spaces and this is one of the reasons why there is a difference.” UKCA guidelines also suggest, “…adjust[ing] ventilation systems so they do not automatically reduce levels due to lower than normal occupancy levels; frequent cleaning of work areas and equipment between use as well as objects that are touched regularly and auditoriums.”

After hearing in one cinematic reopening-centric webinar that ‘cleaning will be easy because we’ve been doing it for decades’, unglamorous HVAC – heating, ventilation and air conditioning – would like to have a moment of your attention. 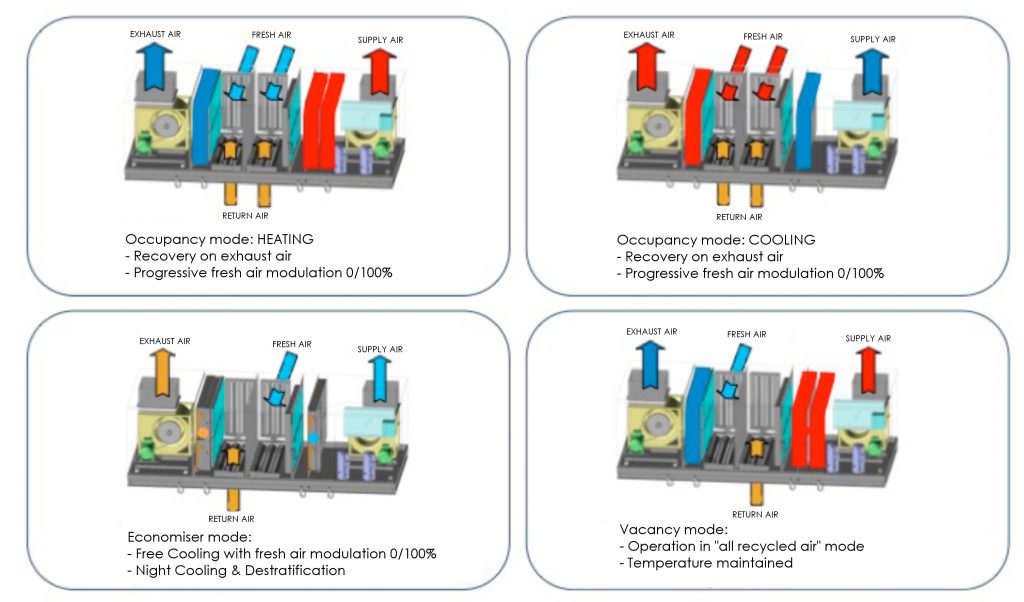 Stateside, one company that specializes in cleaning buildings of infectious diseases isn’t terribly happy about the levels of cleansing which have been bandied about. David Towner runs the decontamination company Advanced Environmental Services (AES). Founded by his father in 1978, AES has been treating coronavirus contaminations for over 40 years. In an interview with Celluloid Junkie, Towner said in an email, “Every building is unique and each business has its own risks so I would be hesitant to make broad statements. This is why a third party partner is so essential. Somebody who can analyse the business from a risk perspective. People need to treat this as they would any potential fatal illness. Mangers and owners would never think of engaging their ushers or ticket booth clerks to help prevent cancer or tuberculosis.

“However, addressing theaters in general: They are massive structures with extremely high traffic and very difficult to maintain. Most of them that I have worked in have had significant risks and some presence of contamination. They are the perfect breeding ground for infectious disease. Since their HVAC systems are constantly running, they are often a source of the problems. It is essential that theatre owners engage a proper decontamination contractor. HVAC contractors are experts in the mechanical components of systems but they do not understand pathogens and often look over risk factors.” He added that his company does thorough analyses of risk factors and makes recommendations to prevent pathogen growth and infection. “Janitorial companies are NOT a credible third party,” he said.  Of the many cinemas contacting AES for their services, Towner stated, “I am shocked at the level of incompetence, lack of knowledge and hazards I am seeing.”

As for masks, Towner said, “I would not hesitate to go to watch a film in a cinema if the owners had followed all of the recommendations I wrote and there was a third party decontamination company who validated it as a safe place… I only wear a mask to make others feel comfortable. They work to an extent but definitely create a false sense of security… However, in a case where someone sneezes and coughs, a mask can catch the aerosolized material which includes the virus so if the mask is removed immediately after a cough or sneeze occurs in close proximity, it can help… It is also worthless to cover your nose and mouth but not your eyes. So in summary, masks have very limited effectiveness.”

The pandemic has and continues to demand huge changes in the way things are done. “The economic harm inflicted upon those who work in the movie business—whether in theatres, in production, or in offices—has been grievous,” said Richard Brody in The New Yorker, “The only thing worse would be a new wave of illnesses and deaths caused by a hasty return.” To Invert William Goldman’s Hollywood dictum it seems that no matter what is suggested, nobody knows anything about this virus for sure. What is 100% clear is that cinema is suffering as are those who love it. If history is anything to go by, movie theatres around the world will get through this – battered, bruised and altered certainly – and the show will go on.

This article was ammaned on 27 June to reflect the new release date of “Tenet”.