Yes, there were movie houses as magical as the one greeted by Jimmy Stewart in It’s A Wonderful Life. I worked in one of them, writes Karen Krizanovich in this exclusive CJ Christmas cinema column.

Single-screen cinemas were all we had in the mid-80s. Most American towns had one. I grew up seeing the latest film with the whole family. As a teen, my mother had kept a scrapbook of her favourite Hollywood stars, cutting their pictures from Photoplay magazine. My father had had a glass of Dom Perignon with Marilyn Monroe at the Brown Derby. After “Goldfinger,” my brothers spray-painted their bicycles gold and had started on the lawnmower with aims to gild the car before dad called a halt. We were, like everyone we knew, crazy about the glamorous world that film brought to us.

Movies were a preview to the life I wanted, a moving menu of a magnificent world out of my reach. So, I studied philosophy as an undergraduate at the University of Wisconsin, Madison and I majored in film for the same reason: to learn the meaning of life. With thousands of students from all over the world, “The Berkeley of the Midwest” was a hotbed of on-campus film societies. I joined all of them. They showed films from everywhere – obscure Hollywood features, Polish classics, French and Germany new wave. We’d put on purposely weird screenings for cult oddities like Mondo Cane (pronounced ka-nay not Kane). I brought my mom up from Illinois to see our Dusan Makavejev film festival. You couldn’t get more political than showing a film that featured a boat with Karl Marx’s crying face on its bow.

At night, society members roamed the streets armed with chrome-plated industrial staple guns, banging up posters on any viable surface. As a new girl on campus, I met my first college boyfriend after walking into one of these advertised screenings – the second part of three of a recherché silent classic. Sidling through my otherwise empty row, he sat down right next to me and said, “This is boring. Let’s leave.” He had a friend who worked at the local movie theatre and it was there I went into show biz. Film changed my life once again.

Instead of waiting tables – getting penny tips left in water glasses – as my friends were, I became an usherette at the Majestic Theatre, a movie house standing outside time, a capsule of air from our grandparents’ youth. Originally opened as a vaudeville theatre in 1906, it became a cinema in 1912 converting to the talkies in 1930. When you saw an American small town movie theatre in any film, its template was the Majestic. 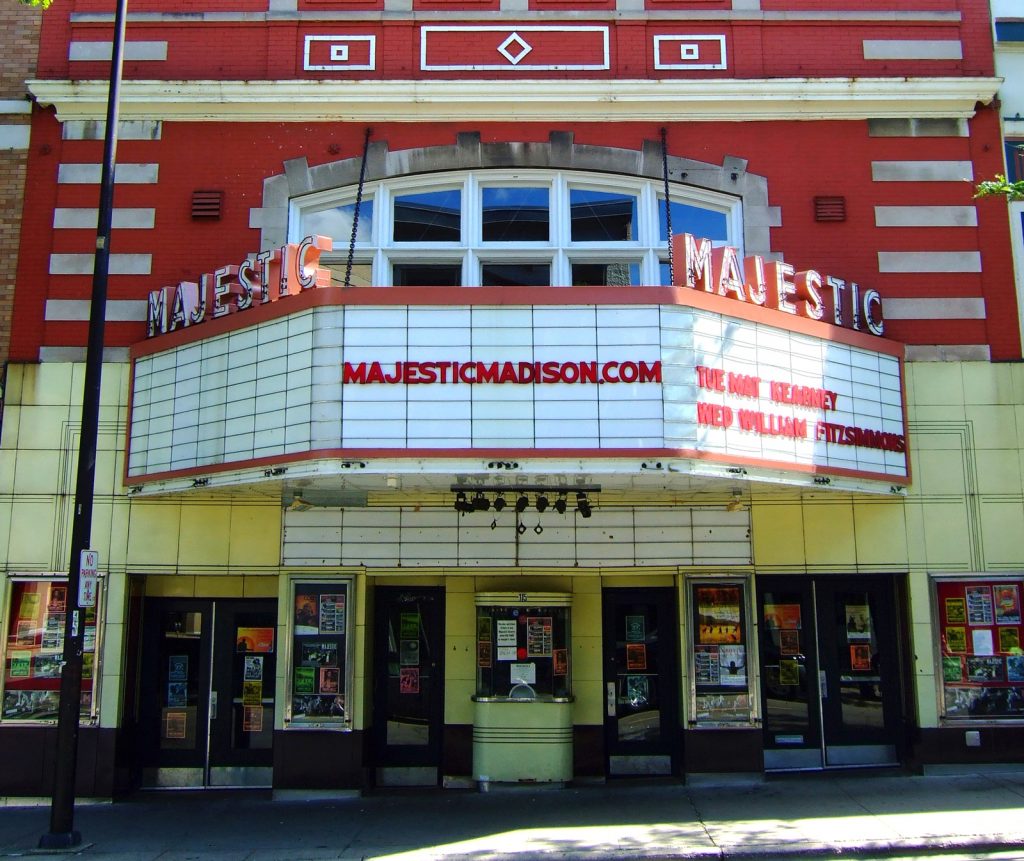 The outside of the Majestic Theater in Madison, Wisconsin as it can be seen in the present day. (Photo: James Steakley)

There, I worked all shifts and did all things. We didn’t wear uniforms. But, aligning with midwestern values, we were responsible. In a weird mash of alternative and conservative culture, we were Hippies U Like. Our associate manager was relaxed, amiable and smoked a prodigious amount of weed after the last screening each Saturday night. The manager was a jovial chap – adorable really – who was transitioning into a woman called Linda. There was a sparky spunky half-Cuban girl with glossy dark hair who I fancied as well as my boyfriend’s friend – the floppy-haired guy with the great smile – and another chap who wore aviator sunglasses and his hair in a blonde 70s semi-fro. The team was completed by a man who looked quite old, like John Huston escaped from a chain gang. He didn’t socialise with us despite invites. The Majestic team was a group of typical white campus folks: students, ex-students, failed students, dropouts, potheads, secret martial arts adherents and outliers. The pay was terrible but we didn’t do it for the money. We did it because we loved movies. Each day I would come to work and greet the Majestic as if it were a being where movies lived, breathed and died.

The ticket booth, all thick glass, touches of brass and worn painted surfaces, was big enough for one person, a stool and a metal lock box. The booth aligned with a set of swinging glass doors had lead onto the tile-floored lobby. There, I’d tear your ticket – or, if you were lucky, Smiling John would as, being a naturally sweeter person, he had a better smile.

Past the velvet ropes lay paradise: a glass case stocked full of movie candy. There were boxes of sweet liquorice, rainbow gumdrops, milk chocolate dots covered with crunchy smaller white dots and chocolate-covered raisins in a noisy cardboard box. This was movie food which had its own realm, just as movie popcorn did. From the minute you bought your ticket, everything was special, from the smell of the popcorn to the dark shape of the theatre itself. I liked being the booth and tearing tickets but looking after concessions was much like cooking.

On my first day I was shown how to run the popper, which was the very last thing to clean in prep for the next day. “Okay, let me show you how to do this,” John, seeing my mind wandering, said, “We use POISON to clean the machine. POISON.” I started to pay attention after that and now hated concessions more knowing that if I didn’t clean the machine properly someone could die. And no one died on my watch at the Majestic. They may have had sex in the balcony – something I had a lot of sympathy for – but they didn’t die. 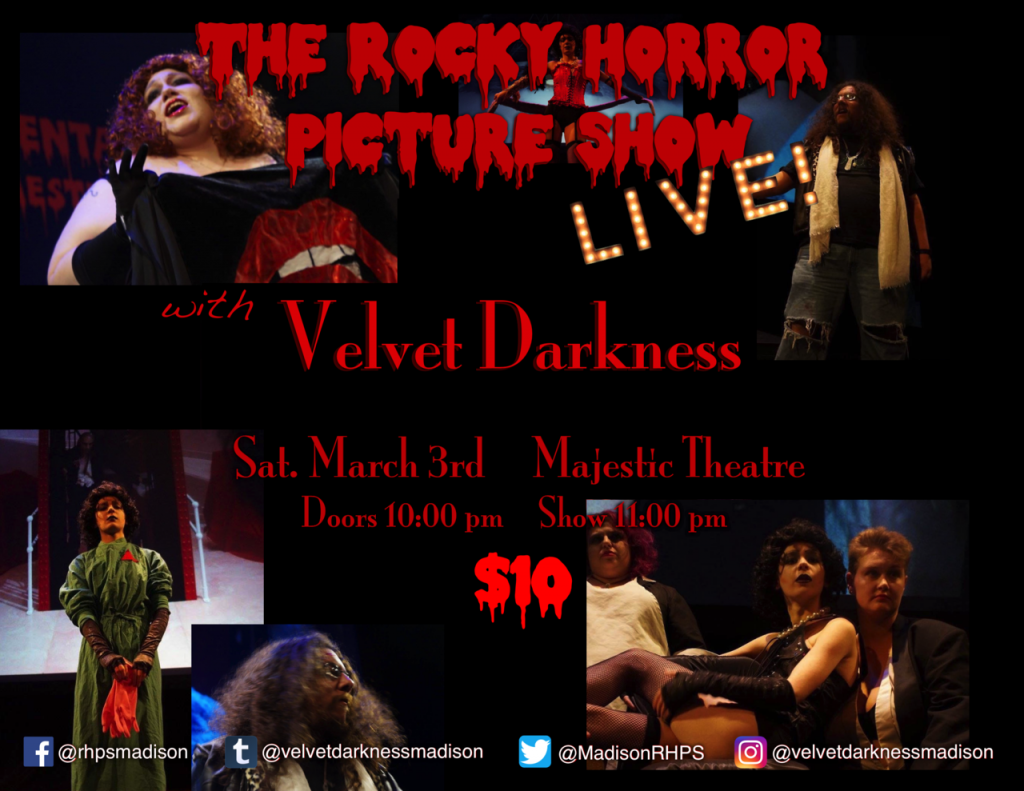 Rocky Horror – continues to this day at the Majestic Madison (photo: Velvet Darkness)

On each side of the candy stand, a corridor lead to the auditorium, its single mighty screen tucked behind a fancy old fashioned proscenium arch. On Saturday nights, we all joined forces to watch over full dress evenings of The Rocky Horror Picture Show, taking bags of rice off a midnight crowd masquerading as Rocky, Columbia in tap gear, Brad, Janet and Dr. Frank-N-Furter. These evening screenings were a pain in the ass, but John, his black mop of hair falling over one eye, would drag the old hoover to the balcony where he’d clean up, smiling as always, as the assistant manager counted the takings, puffing on a very pungent roll-up.

Money counting was the time for stories and our manager had a lot of them. “You know one time I took some acid and while I was tripping, I discovered the key to the universe,” said Linda. “So I took a pen and paper and wrote down the solution to the mystery of the universe, the answer to all questions and the key to all things, stashing the note in an empty desk drawer. The next day, I was feeling quite awful but suddenly I remembered the revelation of the previous night. I opened the drawer and yes, the slip of paper was there,” she paused, “ I took it out and read it: ‘There’s a strange smell in the room.’”

>We’d all hang out. We slept with each other, argued with each other, fell out and fell back into friendship with each other. So when a homeless person showed up, or we found someone crying in their seats, we showed kindness. We rarely had to deal with any violence – no one brought a gun or knife to the cinema of which we were aware. We didn’t even allow lighters or matches at the midnight screenings. The crew at the Majestic were, in one way, like a proper film crew – long hours, managing stretches of boredom and sometimes exercising a unique skill base that included looking after drunks, handling poison, tearing tickets in half and carrying a locked box of cash upstairs. More importantly, we showed up on time and went home when it was all over – not at quitting time.

We lived movies. We talked about movies, about what we’d seen, what we wanted to see and what we heard was good. We’d talk about performances, scenes and stars. We talked directors and cinematographers. What drew us together was the understanding that the Majestic was a time machine, the most effective form of mental transport. An opera may take place on a stage, a chariot race in a coliseum and a circus in a tent, but time and space are expanded, captured and refreshed inside a movie theatre. We didn’t just come to work: we came to be astounded.

**Now repurposed into a music venue, the Majestic Theatre still stands near Madison, Wisconsin’s capital building. It remains the oldest theatre in the state’s capital city.