“It” Countdown Officially Begins After Latest Weekend Box Office Debacle. Hang in There Everyone, T Minus 11 Days and Counting. This Week at the Box Office.

Oh sure, the Mayweather/McGregor fight took a bite out of the boxoffice this weekend and Hurricane Harvey did a number on theatres in Texas but let’s be clear, the main culprit in yet another calamitous weekend at your local multiplex was a collection of new titles that would normally be found on screen 14 while searching Netflix at 1AM.

By the way, if you want something a bit more uplifting and hopeful read my Fall 2017 Movie Preview post here.

Now back to Guadalcanal. The best opening, and I can’t believe I just typed that word, was TWC’s animated “Leap!” which despite its punctuation did not cause a moviegoer rampage to catch a weekend matinee, five year olds in tow. The film managed $5 million for the three day stanza, placing it third behind holdovers of “The Hitman’s Bodyguard” ($10.0 million) and “Annabelle: Creation” ($7.3 million). A 37 Rotten Tomatoes score was not unexpected and neither was an A Cinemascore.  Very young audiences will give a positive grade to almost anything put in front of them (ever watch an episode of “Teletubbies”?). Again it’s pertinent to ask why TWC decided to release the film in 2,575 theatres and incur that extra USD $800,000 in virtual print fees when a break of 1,500 locations would probably have netted them the same $5 million, especially on a weekend where they also expanded “Wind River”. Our coveted Best Review Quote of the Week comes from Neil Pond of Parade Magazine who summer up “Leap!” by saying it was “possibly your only chance to experience Mel Brooks, Carly Rae Jepsen, Tchaikovsky and the enduring, cross-cultural mojo of The Karate Kid all in one movie”.

But to put the vapid weekend tally of “Leap!” into perspective we should quote the scene in “Animal House” where Dean Wormer says, “Two C’s, two D’s and an F, congratulations Kroger, you’re at the top of the Delta pledge class”. Opening up at #15 is great if you’re debuting on the Billboard singles charts but it’s not quite as stunning a feat if you’re a motion picture and unfortunately that’s exactly what happened Sony’s “All Saints” which could only manage $1.5 million for the weekend. The weekend’s final new opener was “Birth of the Dragon” which came in at a paltry $2.5 million. Kudos to the Sony distribution team for at least having the good sense to only go in 846 theatres on AS. If the film had worked they easily could have secured the screens they needed to expand this weekend and they didn’t have to spend the P&A money on a 2.000 print break. The same can’t be said for BH Tilt who felt that releasing a movie about the legendary martial artist on the weekend of the biggest fight of the 21st Century was a nifty idea and also deciding that a break of 1,618 theatres was also a groovy little plan.

The lone bright spot, and that truly is faint praise, is TWC’s “Wind River” which expanded to 2.095 screens and grossed $4.4 million, hardly “Star Wars” territory, but still good enough for fourth place in this boxoffice wasteland

I would comment on how much we were down versus last year but my mother always told me if I couldn’t say something nice not to say anything at all. So here’s the chart… 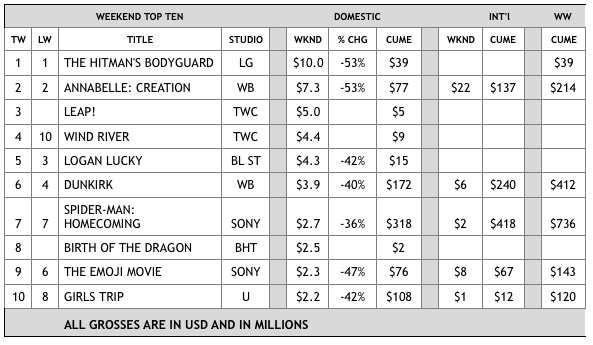 And now for all the new openings…

Oh wait, that’s right.  Well let’s at least mention the limited releases so you get your money’s worth for this column

TWC’s August run of titles continues with the (at last!) release of “Tulip Fever”, a film that has bounced around release dates like a hyperactive six year old on a trampoline.  Alicia Verkander stars in this period piece about two lovers investing in the tulip market.  It’s supposed to be a quality film but I just can’t help snickering when I read that synopsis.

Sony is re-releasing “Close Encounters of the Third Kind” for its 40th anniversary on 800 screens.

Pantelion and Lionsgate have the Mexican comedy “Do It Like An Hombre”, which I’m going to go out on a limb and predict will not be shown in the White House screening room this Labor Day weekend.

On the EVENT CINEMA front, Monday is the encore of the anime title, “Castle in the Sky” and Thursday is the National Theatre’s production of “Yerma” with the always outstanding Billie Piper.