“Hitman’s Bodyguard” Topples Unlucky Soderbergh on Yet Another Listless Weekend at the Movies. This Week at the Boxoffice.

Death, where is thy sting? Another weekend, another new low and yet another 30% tumble at the boxoffice. As painful as it is to analyze, here we go.

Well so much for noble experiments. Much was made over the past few months about the revolutionary marketing and distribution blueprint from the mind of Steven Soderbergh for his Oceans-Eleven-for-the-Piggly-Wiggly-Crowd, “Logan Lucky”. Experiments are historic and revolutionary only if they work and LL came in at a decidedly underwhelming USD $8 million for the weekend, only good enough for 3rd place. Why in the world they felt they needed 3,000+ locations (and corresponding Virtual Print Fee charges) for a movie with this kind of regional appeal is curious, to say the least. You probably could have grossed roughly the same with 2,000 locations and saved the $750,000+ on VPFs and thereby kept the per location averages a bit higher to ensure a longer hold in each complex.

Various sources reported that Soderbergh needed a low to mid teens opening and a 3X multiple in order to make the film a success, even with selling off much of the international rights. Perhaps they were expecting an A Cinemascore to help secure a long run but the straight B the film received won’t exactly impel the film’s opening weekend audience to run and extoll the movie’s virtues at their town’s upcoming Cow Chip Throw & Festival (hello, Prairie du Sac, WI). Or perhaps they were eyeing a Labor Day weekend with a paucity of new fare and dreaming of a sweet third week holdover but it’s almost impossible to hang in there for three weeks when this many theatres are doing this little business on a per screen basis. You get cut down to split shows (rather than a full set of daily showtimes) in a hurry when you open to a PLA of less than $2,700. Plus they have the issue of this coming Saturday night’s McGregor/ Mayweather fight, which is certain to take a large chunk out of male oriented moviegoing this weekend (more on that later) that very few industry outlets are mentioning.

The weekend’s one bright spot was Lionsgate’s Ryan Reynolds/ Samuel L. Jackson buddy road trip comedy, “The Hitman’s Bodyguard”, which won the weekend with a larger than expected USD $21.6 million.  A Cinemascore of B+ and a Rotten Tomatoes figure of 38 typically would not translate to a long boxoffice haul but keep in mind there’s a chance that the film will also win the next two weekends before “It” debuts to what figures to be a USD $55-60 million opening. A regular feature in this column is the best movie review quote of the week and we are proud to present this week’s victor, Katie Walsh from Tribune News Service, who summed up “The Hitman’s Bodyguard” by declaring, “It already feels like you’re half-watching it on TNT on a Saturday afternoon”.

On the limited front, FSL’s “Patti Cake$” launched to a paltry per location average of $4,700 in its first 14 theatres. TWC’s “Wind River” had a very nice expansion, however, grossing $3 million in nearly 700 theatres. 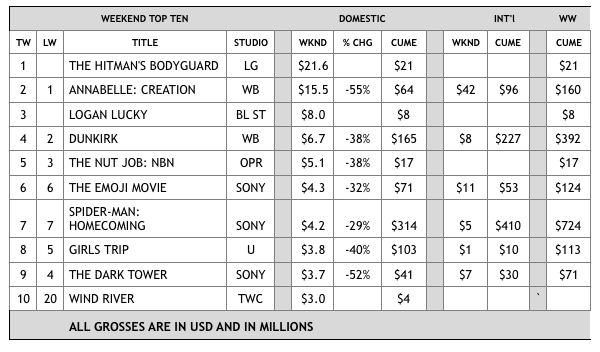 “It” may be opening September 8th but to quote the Little River Band, (as all of us do at some point during the day), it’s a long way there.  Let’s see what incomparable examples of filmmaking prowess await us in the meantime.

“Leap!”  (TWC)—Nothing screams commercial kidfare like an animated French tale from the 1870s about an orphaned ballerina and the building of the Eiffel Tower. Lending their vocal talents to “Leap!” are Elle Fanning, Nat Wolff, Mel Brooks(?) and they also called (maybe) Carly Rae Jepsen who said yes. The funniest thing I saw this week was that the film was rated PG for “impolite humor”. Now there’s something you don’t see every day. I think it ranks just behind “Rated PG-13 for unremitting insults of small mammals” or “Rated R for repeated beatings about the face and neck”.

The Verdict:  Yet another example of an August title that has leapt (sorry) around the release schedule a few times. TWC will get over 2,000 because, quite frankly, there isn’t anything else out there. USD $5 million at most.

“All Saints” (Sony)—Well at least this one wins the award for most inspirational story of the week. John Corbett plays a real life pastor who opens his financially strapped church to refugees from Southeast Asia.

The Verdict:  I know it’s a broken record but faith based films are extremely difficult to predict. Moviegoers who are interested in this fare seldom show up on tracking or mainstream social media. Unless there are a ton of Northern Exposure fans who have been waiting for the next John Corbett movie I don’t think this gets past $4 million, especially on only 800 screens.

“Birth of the Dragon” (BH Tilt)—My, how topical. A movie chronicling the epic 1964 showdown between Bruce Lee and kung fu master Wong Jack Man. Hong Kong actor/martial arts star Philip Ng plays the legendary Lee but perhaps this film should have been made, oh I don’t know, sometime before now. Like during the Johnson Administration, perhaps?

The Verdict:  Only 700-1,000 runs which is plenty for this finite of an audience. USD $2 million and that’s only if Lee’s ghost appears at several opening night screenings to do Q & A.

Both “Good Time” from A24 and “The Only Living Boy in New York” from Amazon/Roadside expand this week.

On the EVENT CINEMA front, we have the previously mentioned McGregor/Mayweather fight on the 26th, the animated “Starship Troopers: Traitor of Mars” on Monday and the anime title “Castle in the Sky” next Sunday.