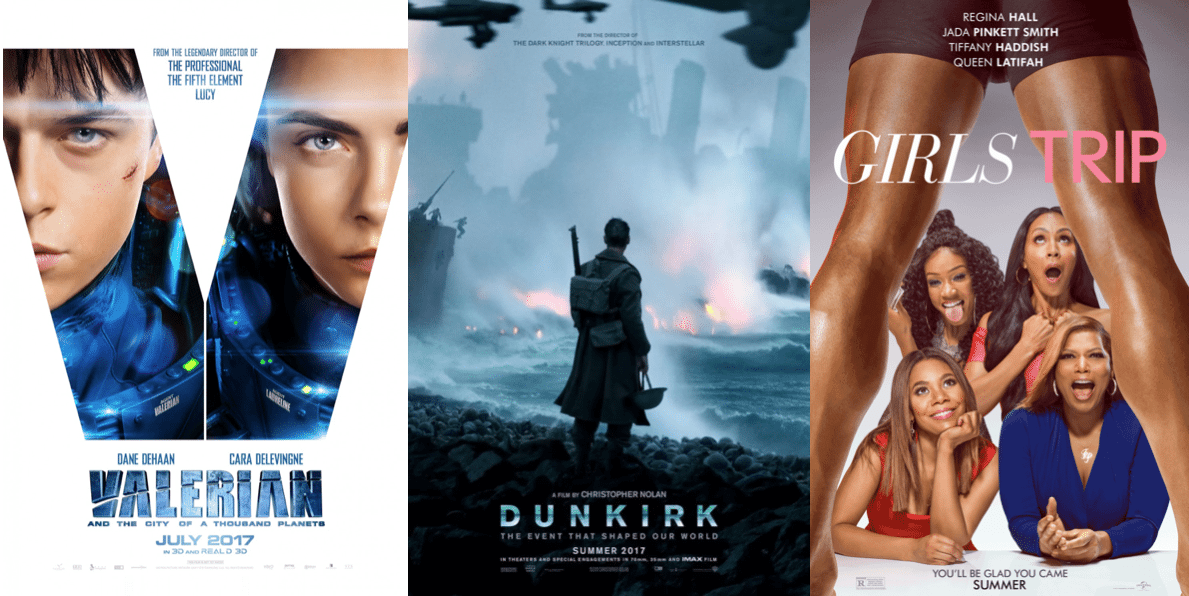 Coming in at the top end of expectations and only slightly over a million off from where we had it last Monday, “War for the Planet of the Apes” got off to a strong start with USD $56+ million here in the States and another USD $46 million overseas.  It will be a tough slog to get to the USD $710 million worldwide take that “Dawn of the Planet of the Apes” amassed but at least it’s a respectable opening and can stem the sequelitis talk in the industry for another week.

While solid, the wide expansion of “The Big Sick” was below expectations as, sadly, large chunks of the country had very little interest in this well reviewed comedy.  Lastly, Broad Green’s “Wish Upon” came in at USD $5.5 million, about what was projected.

Now onto this coming week…

“Dunkirk”  (WB)—Backed by excellent reviews and exhibitor screening reactions, Christopher Nolan’s WWII epic has turned into must-see entertainment for discerning adults and regular moviegoers alike.  Throw in IMAX and 70MM and you have the possibility of a rare summer blockbuster that will also be around at Oscar time.

The Verdict:  All the pieces are in place for an excellent opening and, more importantly, a long run through the summer and into the fall.  Oscar worthy performances abound here, specifically from Kenneth Branagh and the great Mark Rylance.  Oh yes, and there’s Harry Styles too.  USD $46 million.

“Girls Trip” (Universal)—R rated comedies this summer have been roughly as successful as the proposed health care bill or Cheetos’ Lip Balm so why are we high on “Girls Trip”?  First off, the exhibitor screening reactions were positive and the film has a Rotten Tomatoes score of 92, which by the way is 73 points higher than the last R rated comedy, “The House”.  Regina Hall, Queen Latifah, Jada Pinkett Smith and Tiffany Hadish star and “Best Man” director Malcolm Lee helms.  That’s a pretty strong roster.

The Verdict: It would be easy, and quite frankly lazy, to write this off as another R rated female comedy this summer but “Girls Trip” actually has a compelling story at its core about friendship, romance and sisterhood.  Oh yes, and there’s drinking, dancing and brawling as well, just so you don’t think that Pure Flix is distributing this.  USD $20 million.

“Valerian and the City of a Thousand Planets” (STX)—Director Luc Besson goes for broke with this visually stunning sci-fi adventure starring Dane Dahaan and Cara Delevingne.  Reviews have been all over the board but mostly positive in that it succeeds in being the spectacle it aspires to be.  And after all, who needs plot coherence and Shakespearean trained actors anyway.

The Verdict:  Made and positioned for an international audience, “Valerian” should still find enough of a few different demographics to be respectable, while never being the must-see megahit that Besson intended.  The ex-Relativity film may not have staying power but won’t embarrass itself on opening weekend and could become a cult classic one day.  USD $16 million.