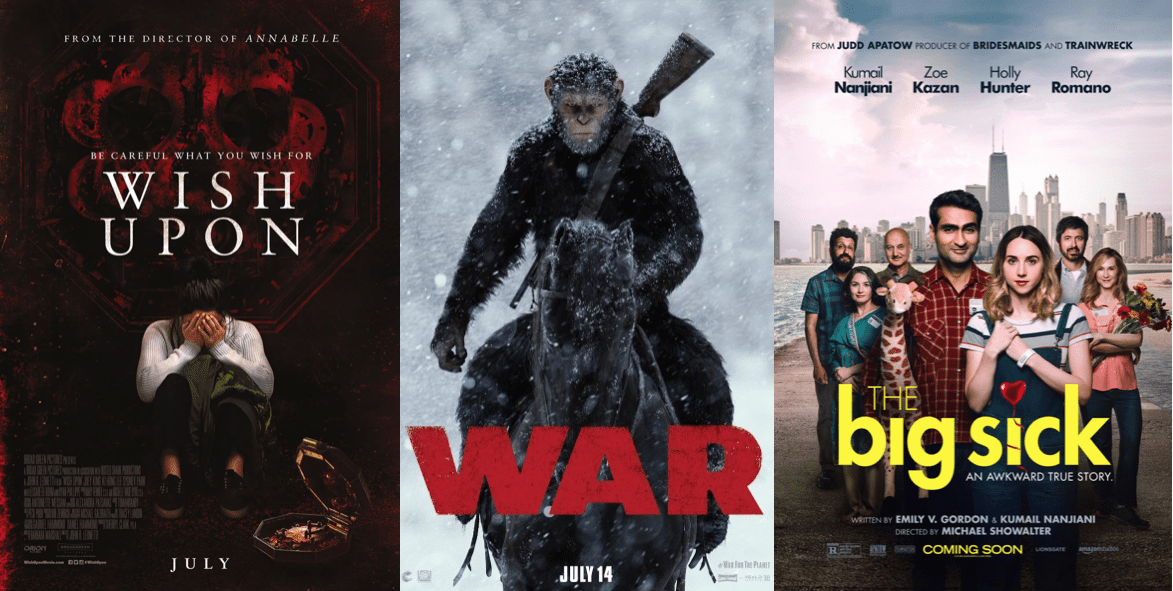 Now that’s more like it.  Sony and Marvel proved you can go home again, especially if that home now encompasses the Marvel Universe as “Spider-man: Homecoming” rebooted to the tune of USD $117 million.  As late as midweek many in the industry were debating if SMH had a shot at cracking the USD $100 million barrier while we at CJ last Monday couldn’t foresee that being an issue. This Spidey had so much going for it-a likeable new star, a well cast villain, Robert Downey Jr as Iron Man, Marisa Tomei as Aunt May, the MU and a Rotten Tomatoes score of 93.  Sequels and reboots aren’t dead but they just have to be good.  I’ll wait for everyone in Hollywood to wrap their heads around that concept.

And we’re back.  Sony & Marvel did an outstanding job at mining this Spider-man’s appeal to the 18 and under crowd, something that had been lacking in recent webslinger efforts.  For the record, this was the second largest opening for the franchise, after “Spider-man 3” in 2007 and the 7th highest Marvel Universe opening.  An ‘A’ Cinemascore should help with the overall multiple as well so get used to seeing SMH in theatres for the rest of the summer.

As a side note, Michael Keaton continues his amazing career resurrection as the villain in SMH.  After churning out one comedy hit after another in the 1980’s, Keaton’s career floundered until very recently after several duds like “First Daughter” and  “Herbie Fully Loaded”.  I forgot about that last one.  The career recharge began with 2010’s “The Other Guys” (one of the most underrated comedies of the past several years, by the way) and continued with his 2014 Oscar nominated turn in “Birdman” and as part of the acting ensemble in Best Picture winner “Spotlight”.  Good for him.

Now onto this coming week…

The Verdict:  From a Rotten Tomatoes score of 92 to very positive exhibitor screenings, WFTPOTA has a lot going for it.  2014’s “Dawn” opened to USD $72 million and 2011’s “Rise” debuted to USD $54 million.  It’s a good bet that this lands somewhere in the middle but perhaps a bit less than the numbers being tossed around by industry insiders last week.  USD $56 million

“Wish Upon” (Broad Green)—From the director of “Annabelle”, Joey King (The Conjuring”) plays a high schooler who finds an old music box that will grant seven wishes in return for deadly sacrifices.  Ryan Phillippe and Elisabeth Rohm co-star.

The Verdict: The lack of any RT score is telling, though hardly unexpected with horror/thrillers such as this.  Maybe this brings in a few “Annabelle” fans but King and Phillippe probably won’t and this could very well get lost in the summer shuffle, even with the lack of a horror title in the market.  USD $8 million.

“The Big Sick” (LG/Amazon)—After opening to some of the best per location averages all year, “The Big Sick” expanded this week into 365 locations and still had a PLA average of over $11,000.  Now the film finally gets its wide release (2,500 locations).

The Verdict:  There’s no question how this plays in San Francisco, Chicago or Boston but it will be interesting to see the results from middle America when it expands this week into cities such as Harlingen, Grand Forks and Bozeman.  In any case, there is enough pent up interest off the Sundance buzz, an RT score of 97 and a Flixster user score of 91 to start the film off on a lengthy run at the boxoffice.  We’re a bit more bullish than most so let’s say USD $12 million.

Florence Pugh stars in the story of a 19th century woman sold into marriage to a middle age man in Roadside Attractions’ “Lady Macbeth”.