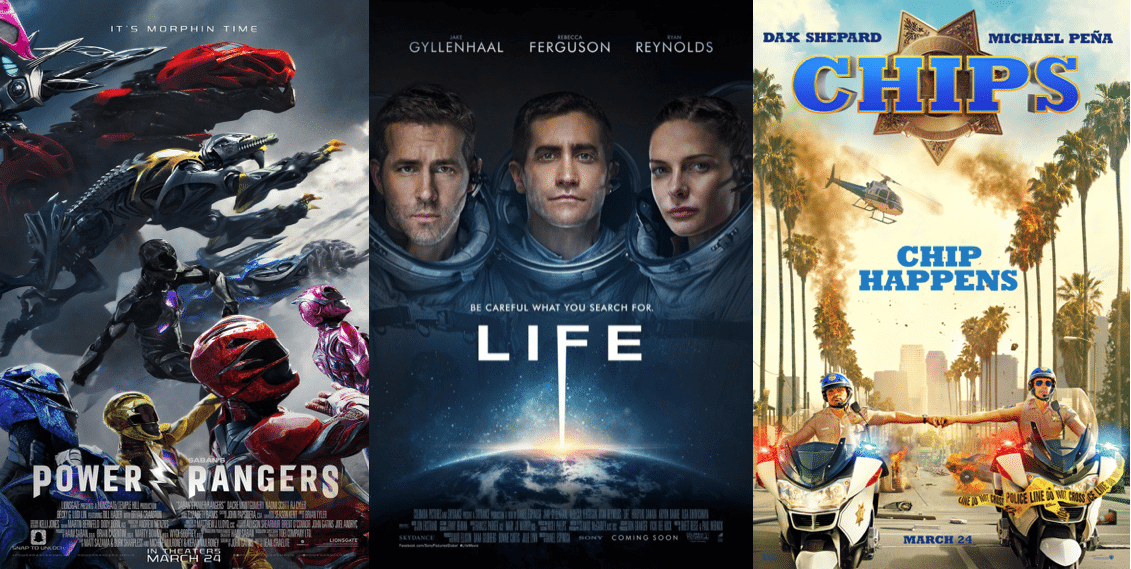 Ho hum, another day another Disney franchise is reborn. The live action version of “Beauty and the Beast” proved a boxoffice juggernaut this past weekend, pulling in a beastly USD $170 million domestic and another USD $180 internationally.  Global BO on B&TB was led by China with USD $44 million, U.K. USD $22 million and Korea’s USD $12 million. The movie set innumerable records Stateside including biggest opening ever for a PG rated film, 7th largest opening of all-time and biggest March opening ever to name but a few. This space had the opening at USD $150 mil with the footnote that it could go higher.  Its USD $170 mil debut is even beyond our expectations.

The news wasn’t quite as rosy for the other openings this St Patrick’s Day weekend as “Trainspotting” 2 pulled in a just-ok USD $36,000 per location average from its four locations and Terrence Malick proved again that very few people care about his films, even if they do have Ryan Gosling and Michael Fassbender in them, managing a meagre USD $13,000 per location average in its four debut locations.

With that, we power on to this coming weekend

“Power Rangers” (LG)—Gone is the Mighty Morphin but the concept remains the same. High school kids with superpowers band together to save the world.  Yes, again. The teen stars are largely unknown, other than one of the stars of TV’s “Stranger Things”, but the supporting cast is rather noteworthy with actual accomplished actors such as Bryan Cranston and Elizabeth Banks making appearances. I’ll take “What Were They Thinking” for $1,000, Alex.

The Verdict:  Most in the industry have this in the high USD $30 million area but we just get the feeling it may be a bit less than that.  Let’s say a less-than-mighty-but-still-acceptable USD $30 million and see what happens.

“Life” (Sony)—When the first footage was shown on this Ryan Reynolds/Jake Gyllenhaal sci-fi’er, most in exhibition felt that Sony had the hit they so desparately needed. But since that time tracking has been rather flat and interest seems to have dwindled rather than gained steam. “Safe House” director Daniel Espinosa directs the aforementioned Reynolds/Gyllenhaal combo along with an international cast of co-stars in a story about a spaceship crew that discovers life on Mars.

The Verdict:  If you had asked me six months ago I would have said USD $20 million would have been Friday’s gross. Now it looks like that’s the upper end of the range for the three days. USD $18 million. But look for a bigger take overseas.

“Chips” (WB)—Leave it to Hollywood to make a movie version of a TV show that only ran six years and went off the air in 1983.  Well at least we know one of the show’s fans-Dax Shepard, who not only stars in this California Highway Patrol action comedy, but also steps into the director’s chair and wrote the movie. Perhaps he’s also providing catering services.

The Verdict:  This might have seemed like a good idea at some point. Like when the U.S. invaded Grenada and we were listening to Kajagoogoo warble “Too Shy”, but it’s 34 years later and “Chips” is as far from our daily vernacular as Members Only jackets and Lotus 1-2-3. USD $13 million.

ALSO OPENING— Woody Harrelson stars as a man reuniting with his daughter in the oddball comedy, “Wilson”, from Fox Searchlight.  And a man falsely sent to prison attempts redemption by competing in the national Slam Dunk championship in “Slammin Jammin”. It may not be a boxoffice slam dunk but it should be Jose Canseco’s highest grossing film of the year.