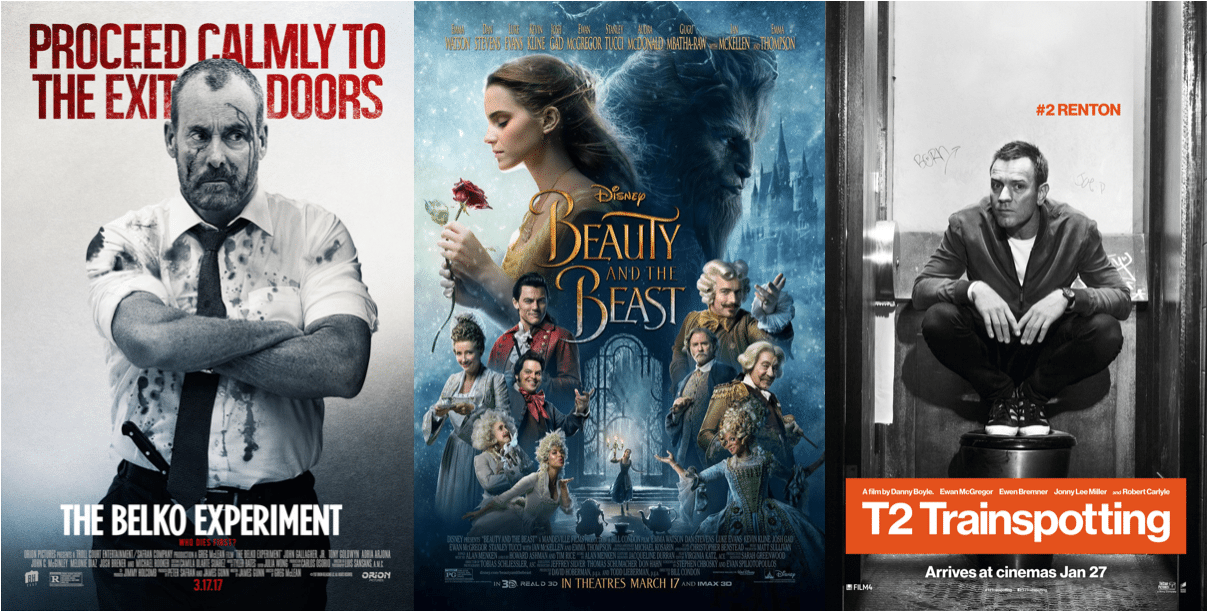 If only for a week, Kong proved King at the boxoffice this past weekend as Warners’ “Kong: Skull Island” roared its way to a USD $61 million opening, well ahead of most industry projections. Add in another USD $81 million overseas and that’s a nifty USD $140 million plus worldwide debut and undoubtedly the start to a Kong franchise (“Kong V. Godzilla”?, “Kong V. Rodan”?, “Kong V. Kramer”?). What was especially noteworthy was that despite its solid take, the ape and his friends didn’t let the air out of the rest of the Top 10. Granted, “Logan” did fall 57% in its second week but that percentage is less than the drops for both “Wolverine” and “X-Men Origins: Wolverine”. In addition, films like “Get Out”, “The Shack”, “LEGO Batman” and “Before I Fall” all dropped less than 40%. I hope they all enjoyed their lengthy runs because there’s a beast knocking at the door, looking to lay waste to the competition, and it’s not named Kong.

Speaking of which, on to this coming weekend

“Beauty and the Beast” (Disney)—Certain as the sun rises in the east, the first Disney film of the year will most certainly be a boxoffice beast. This live-action take on the 1991 animated Disney classic is about as close to a sure thing as we get in this industry. Emma Watson stars as our heroine Belle who foils Luke Evans’ Gaston’s advances at every turn in favor of a mysterious beast in the form of “Downtown Abbey”’s Dan Stevens. The director is Bill Condon, the helmer behind “Dreamgirls”, “Gods and Monsters” and the underappreciated “Mr. Holmes” and the supporting cast includes names such as Kevin Kline, Ewan McGregor, Ian McKellan, Emma Thompson and Josh Gad (playing the first openly gay character in a Disney film, much to the chagrin of the Russian State Duma and drive-in owners in Alabama).

The Verdict: The movie is primed to be an international phenomenon (most countries open simultaneously with North America) and Fandango’s presales have outpaced the studio’s “Finding Dory” and “Captain America: Civil War”. The early Rotten Tomatoes scores are good (70) but not great, but because the animated original came out so long ago this film should draw both younger audiences as well as adults waxing nostalgic for when they saw the original in a sticky, sloped floor auditorium. Ah, those were the days. Throw in 3D, IMAX, PLF, D-Box, 4DX and any other configuration of letters and numbers you can come up with and it all adds up to a boxoffice behemoth. USD $150 million (but don’t be surprised if it goes higher).

“The Belko Experiment” (Indep.)—I suppose there was actually a counter-programming thought process to release this Tony Goldwyn horror/thriller about executives in a South American office building who get sucked into a bizarre experiment against “Beauty and the Beast” but frankly I can’t come up with one at the moment. Probably the less said the better, other than at least they’re only releasing in 1,200 theatres.