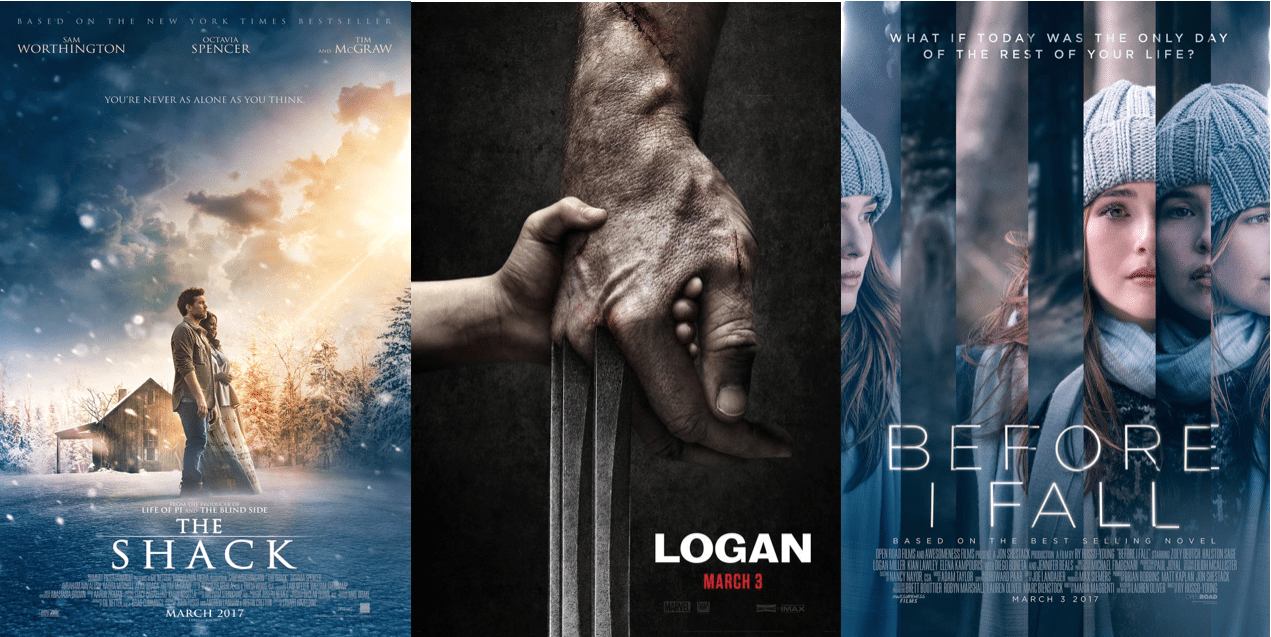 Audiences this past weekend got out en masse to see Jordan Peele’s “Get Out” to the tune of USD $30.5 million. That number, coupled with an almost unheard of horror movie Cinemascore of A- and a stunning 100% Rotten Tomatoes mark, made the film one of the true surprises of winter 2017.

Sadly, that’s where the good news ended at the boxoffice this weekend as both Lionsgate’s “Rock Dog” and Open Road’s “Collide” were as pitiful as expected, both finishing out of the top 10. Try to find the last weekend where two wide avail films finished south of that Mason/Dixon line, I’ll wait. “Rock Dog” was completely out of tune and managed only USD $3.7 million in dog biscuits and, as predicted here, “Collide” was one of the worst openings for a wide avail title in many a moon with a measly USD $1.5 million take. No, I did not forget a digit.

On to this coming weekend and the 800-pound wolverine.

“Logan” (Fox)—The third and final installment in the X-Men/Wolverine saga, Hugh Jackman’s “Logan” is primed to destroy all comers both on screen and at your local multiplex. “X-Men Origins: Wolverine” opened to USD $85 million in 2009 but the second film of the trilogy, “Wolverine”, sagged to a debut of USD $53 million (however it did ring up USD $282 million in foreign cash, largely due to its Asian setting). So why the high ceiling for “Logan”? How about a current Rotten Tomatoes score of 96? Or 194,000 Twitter followers who are giving the film’s ad materials a 45:1 positive/negative ratio? And it never hurts to have the power of IMAX behind you either.

The Verdict: This is the final “Wolverine” and all arrows point to it being, by far, the best. This past week Patrick Stewart announced he is retiring from “X-Men” movies so this will be his swan song. USD $78 million

“The Shack” (Lionsgate)—Faith based films, especially those based on best selling books, are difficult to call. Are they “God’s Not Dead” or are they “Resurrection of Gavin Stone”. It’s always a crap shoot. Having said that, “The Shack” has several factors in its favor. The book is an actual best seller and its message reaches beyond the faith based audience. It also has, for lack of a more tactful way of putting it, real actors. Sam Worthington and 2017 Oscar nominee Octavia Spencer co-star along with Tim McGraw. Ok, McGraw will never be confused with Pacino, but he does mean something in the middle of the country.

The Verdict: Yes, it’s an inspirational film but the subject matter (man receives an invitation from “God” to meet at the remote shack where his daughter was murdered) doesn’t exactly scream “Feel Good Movie of the Year”. Having said that, I’m guessing this finds an audience not getting clawed by Wolverine. USD $8 million

“Before I Fall” (Open Road)- Oh those six words, “Based on a Young Adult Novel”. That worked a few years back in the case of “Fault in our Stars” and the like but that audience has proven more and more difficult to shepherd into the movie theater as studios have turned any YA book that has sold at least 56 copies into a film, hoping to tap that fickle audience. Zoey Deutch stars in this “Groundhog-Day”-Meets-“Edge-Of-Seventeen” drama.

The Verdict: Despite an acceptable Rotten Tomatoes score of 64 this doesn’t figure to make much of a dent in the moviegoing landscape this weekend. USD $4 million

ALSO OPENING—“Table 19” is a wedding comedy/drama from Fox Searchlight starring the ever bubbly Anna Kendrick. Bleecker Street has the comedy “The Last Word” with the odd pairing of Amanda Seyfried and Shirley MacLaine. And finally we have the documentary, “My Scientology Movie”, from filmmaker Louis Theroux.