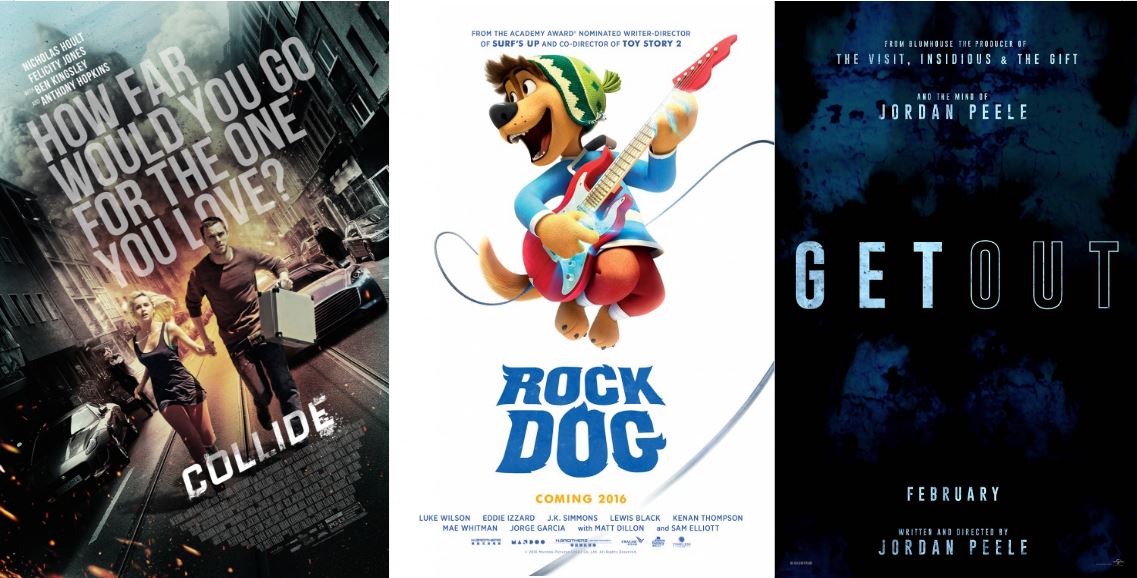 I remember a time way back in the day (like last year) when President’s Day weekend was an absolute treasure trove for moviegoers.  Studios jammed their winter tentpoles on that long weekend looking to take advantage of the Monday holiday and kids being out of school.  Well, fast forward to 2017 and we could be forgiven for thinking this past weekend was actually Arbor Day or the first week in December.  The holiday four-day stanza was one of the worst for new films in many years as it turned into a barren wasteland for the three new openers.

“The Great Wall” barely reached the USD $20 million mark and both “Fist Fight” and “A Cure For Wellness” hacked, coughed, crashed, and burned. “Fist Fight” proved that watching two teachers battle it out after school wasn’t as interesting as it might have been when you were 11. Meanwhile, “A Cure for Wellness” managed a paltry Rotten Tomatoes score of 38 but to paraphrase the scene in “Animal House” where the Dean gives one of the Delta House frat members their grades, “2 C’s, 2D’s and an “F”…congratulations Kroger, you’re at the top of the Delta pledge class”, that RT score was actually the highest of the three openers. Faint praise indeed.

What did all this mean for the boxoffice this weekend? Well it meant that Batman and bondage ruled the multiplex yet again as “LEGO Batman” and “Fifty Shades Darker” both pushed their totals close to or above the USD $100 million plateau. Can Jordan Peele and the Blumhouse gang break their stranglehold on the top slots?  Let’s find out.

“Get Out” (Universal)— Comedian Jordan Peele from TV’s “Key and Peele” steps into the director’s chair for the first time with this horror/thriller. Gotta give the guy his due, “Get Out” is currently running at a perfect 19/19 positive reviews on Rotten Tomatoes. Last year’s “Keanu”, in which Peele starred but didn’t helm, figured to be a surprise hit prior to opening but could only muster a USD $9 million debut on its way to a final tally of USD $20 million so we’re not talking a huge potential audience here. But the horror crowd is a fickle one and this figures to have a strong urban appeal to it as well. And having the strength of Blumhouse behind the project doesn’t hurt either.

The Verdict:  Take all of the above factors and toss them into a bag of Shake and Bake and your guess is as good as mine. This has the potential to knock “Fifty Shades” out of the #2 spot and possibly even challenge “LEGO”. USD $17 million.

“Rock Dog” (Lionsgate)— It’s a bit perplexing that LG decided to release this animated title two weeks after “LEGO Batman” but alas here it is. The story of a Tibetan Mastiff who dreams of rock n roll stardom (yes I did just write that with a straight face), “Rock Dog” features the voices of Luke Wilson and the always reliable Eddie Izzard.

The Verdict:  Nothing screams boxoffice magic like “Based on the Chinese graphic novel”. USD $ 7 million.

“Collide” (Open Road)—This Nicholas Hoult, Felicity Jones drug cartel thriller used to be titled “Autobahn”. I don’t know exactly why that’s pertinent other than I had to write something about this movie. Bounced around the release schedule like junkers at a Demolition Derby, this has the possibility of being the lowest wide avail opening so far in 2017.

The Verdict:  How this isn’t straight-to-video is the real question here.  USD $3 million.

Mercifully it is finally time for the 89th annual Academy Awards this coming Sunday, February 26th and unless you’ve been hiding in an Icelandic cave you know that “La La Land” is in prime position to rule the night.  The film is as close to a lock for Best Picture as we’ve had in a while but here’s a guess at the rest of the categories (just so there’s a reason to stay engaged throughout the festivities)

BEST PICTURE—“La La Land”.  Also with a shot: “Moonlight”, though it’s quite a long shot

BEST ACTOR—“It’s been a battle to the wire between Casey Affleck and Denzel Washington.  Let’s go with Denzel as he’s won the majority of the most recent awards.

BEST ACTRESS—Emma Stone is the odds-on favorite for her role in “La La Land” but Isabelle Huppert can’t totally be counted out.

BEST SUPPORTING ACTOR—This category is closer than most people think.  The money is on Mahershala Ali for “Moonlight” but Michael Shannon in “Nocturnal Animals” could pull off an early evening stunner.  The only question is whether enough Oscar voters watched the film.

BEST SUPPORTING ACTRESS—Viola Davis in “Fences”.  Write it in ink.  Though Octavia Spencer’s performance in “Hidden Figures” was outstanding.

COSTUME DESIGN—Knowing that “La La” might sweep, voters may opt for the Camelot of “Jackie”.

BEST DOCUMENTARY FEATURE—“O.J. Made in America” in a photo finish over “13th”

BEST FOREIGN LANGUAGE FILM—Asghar Farhadi’s decision not to attend the Oscars will probably propel him to victory for “The Salesman”, though most agree “Toni Erdmann” is the better film.

MAKEUP AND HAIRSTYLING—“Star Trek Beyond”.  For no apparent reason.

ANIMATED SHORT FILM—“La La Land”.  Oh sorry, knee jerk reaction.  “Piper” from Pixar should win but “Borrowed Time” was affecting in a strange sort of way and occasionally voters will vote for a non-studio entry.

BEST VISUAL EFFECTS—The consensus seems to be in favor of “The Jungle Book” over “Rogue One”.

ADAPTED SCREENPLAY—“Moonlight” should win this rather easily

ORIGINAL SCREENPLAY—The Academy may want to give “Manchester By The Sea” something so this may be as good a landing spot as any.