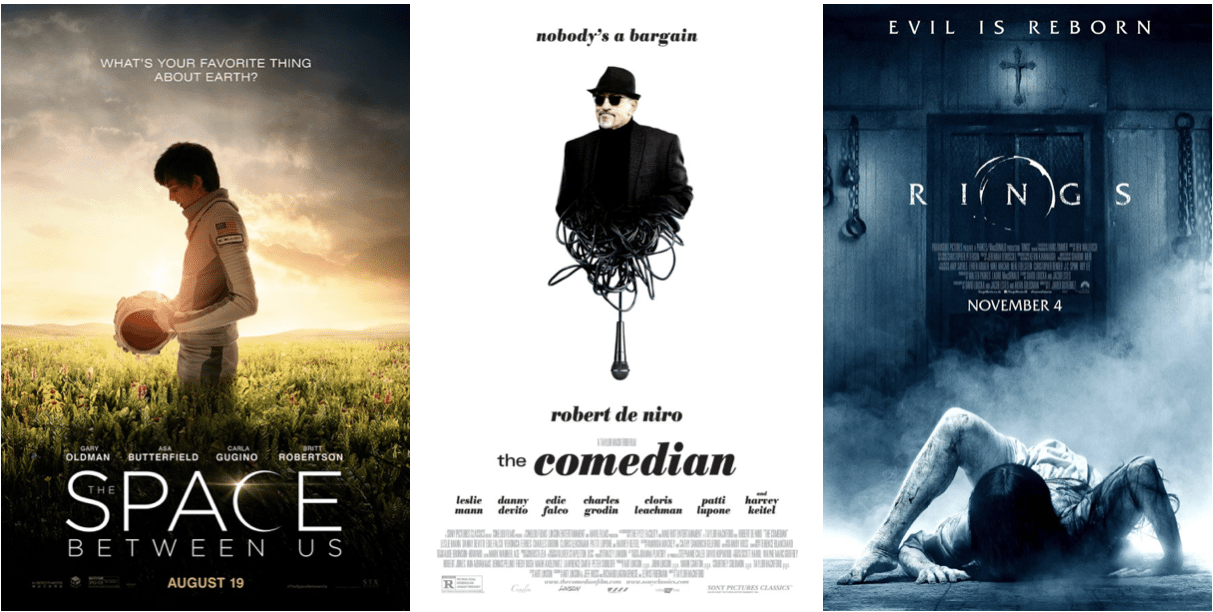 Even as late as a month ago we never thought we’d be asking the question, “gosh, can anyone stop ‘Split’”. M. Night’s latest held in nicely in its second week, dropping only 34% on its way to a repeat #1 spot at the boxoffice this past weekend. The film’s cumulative gross is USD $78 million and USD $100 million is in sight.

Things weren’t as rosy for the newbies, however, as all three new titles under performed. How much of an effect did the PETA boycott have on Universal’s “A Dog’s Purpose”? From my conversations with exhibitors who have theatres in the middle of the country it doesn’t seem like it had too much of an impact. I never bought the mid to high USD $20 mil opening projections the industry was tossing around last week and the film came in at USD $18 million for the weekend, above the prediction from this space last Monday. “Resident Evil: The Final Chapter” debuted to roughly USD $13 mil, which was right on projection, and “Gold” was anything but golden at USD $3 mil, also right at what was projected here.

Onward to this coming weekend.

“Rings” (Paramount)—January seems to be the month of the latest installments of films from the last decade and the latest in the “Ring” series continues the trend this coming weekend. “The Ring” opened to USD $15 million in 2002, ending up at USD $129 million (ah yes, the days of the 8 times multiplier) and the sequel was released in 2005 and that film opened to a strong $35 million. Then…crickets. Now in 2017 we have the third installment which will try to drive moviegoers out of their homes and away from big game parties and wagering on the Puppy Bowl. The fact that this is rated PG-13 here in the States should help as tween/teen horror titles on Super Bowl weekend have a way of working and things have been a bit barren in the marketplace for the under 17 crowd as of late. For years, Screen Gems ruled SB weekend thanks to PG-13 horror titles like “When a Stranger Calls” and “The Roommate”. Paramount hopes to replicate that success.

The Verdict: None of the principals are back from the first two “Ring” movies but does that really matter to a teen horror audience? The outdoor is effective and the social media spots are sufficiently creepy but the multiple release dates (I lost count after the third) is tad troubling. USD $15 million.

“The Space Between Us” (STX)—Another title that has moved around on the release schedule, Asa Butterfield (“Miss Peregrine”) and Britt Robertson (“Tomorrowland”) star as two (literally) star-crossed lovers in this fantasy romance. Peter Chelsom (“Hector and the Search for Happiness”, “Serendipity”) handles directing chores and it’s always a plus to have Gary Oldman and Carla Gugino in your movie.

The Verdict: Tracking is pretty stagnant but there’s a chance young moviegoers may want a little escapism. USD $8 million.

Also Opening
I know what you’re thinking…nothing says stand-up comedy like Robert DeNiro. The actor’s latest, “The Comedian”, is the story of aging insult comic Jack Burke. Danny DeVito, Harvey Keitel, Cloris Leachman and Patti LuPone co-star. By the way, 1978 called and they’d like their cast back.

Also making their limited debuts are the Asian comedy/actioner, “Confidential Assignment” and Magnolia’s Oscar nominated documentary, “I Am Not Your Negro”, which chronicles the history of race in modern America through the eyes of author James Baldwin. Samuel L. Jackson narrates.