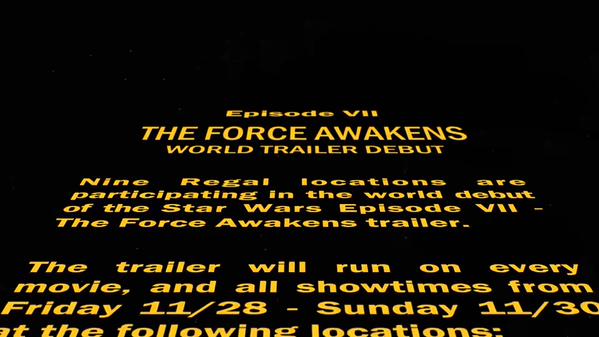 A few days ago you may have felt a great disturbance in the force, as if millions of PR managers suddenly cried out in terror, and a theatre chain was suddenly silenced.

Translation: Regal Cinemas learned the hard (and often harmless) lesson so many online retailers have already experienced on countless occasions.

While updating their customer-facing website over the weekend, Regal broke the news that a teaser trailer for “Star Wars: The Force Awakens” (a.k.a “Star Wars: Episode VII”) would be shown in a small number of theaters. The circuit’s website even went so far as to list the nine cinemas showing the teaser before all films from November 28th through November 30th. In a commendable attempt to be thorough, Regal also posted links to the announcement on Facebook and Twitter.

The only problem in all this is that the official announcement of the teaser trailer for “The Force Awakens” was meant to come from its director J.J. Abrams who had not yet made the news public. Oops.

The “incident”, if you can actually call it that, occurred early Monday morning setting off a nerd alert in certain sectors of the Internet galaxy. Though Regal quickly took down the webpage and deleted their posts on Facebook and Twitter, they were soon made aware (if they weren’t already) that once something is published online, it is impossible to erase. Screenshots of their webpage and even a YouTube video began making the rounds on social media and the blogosphere.

It wasn’t long before official word came from Abrams, via his production company’s Twitter account, that an 88 second teaser for the highly anticipated release would hit select theatres this Friday. Shortly afterwards Regal republished their webpage announcing details on where and when to see the “Star Wars” teaser.

This set off another flurry of tweets and blog posts, as did Twitter posts from AMC Theatres and Cinemark confirming they would also be showing the “Star Wars” teaser at specific cinemas.

We can confirm that a teaser for @StarWars: The Force Awakens will play at select AMCs this Friday! Locations soon! pic.twitter.com/nPpaQONHQQ

This is not the first time a company has mistakenly published an announcement through their website about a product coming to market before it was meant to be made public. It happens in the consumer electronics industry with such regularity that it hardly ever makes news anymore when it happens.

The circumstances around such mishaps are almost always the same; a webpage is being prepared for publication in advance of an upcoming release or announcement and a few stray clicks later, accidentally goes live for the world to see, before being hastily pulled off a website.

Last year Amazon leaked a few products before their official debut including a Windows 8 tablet and and update to their own Kindle product line. Even heavyweights such as Apple aren’t immune. In October, the obsessively secretive company briefly published screenshots of the new iPad a day before it was to be introduced at a press conference.

There is even speculation now that some electronics manufacturers are behind such leaks in an effort to drive additional marketing attention or monitor initial consumer response to a new offering.

Given the speed with which Abrams official announcement occurred, followed by confirmations from two additional theatre chains, Regal’s “Star Wars” teaser gaff looks more like an unintentional slip-up that came about as they prepped their website while still under embargo.

On a slightly different note, the way in which the first teaser for “The Force Awakens” is being released is interesting. These days film trailers tend to make their debut online slightly before or at the same time they appear in theatres. The “Star Wars” teaser will only appear in theatres, at least initially.

Abrams has been quite vocal about wanting to return the space franchise to its roots, going out of the way to build real sets and use practical effects whenever possible. The filmmaker seems to be taking a similar approach to marketing. By releasing the teaser only to a limited number of movie theatres, it will be viewed in the same way as the trailer for the very first “Star Wars” film 37 years ago – in a cinema.