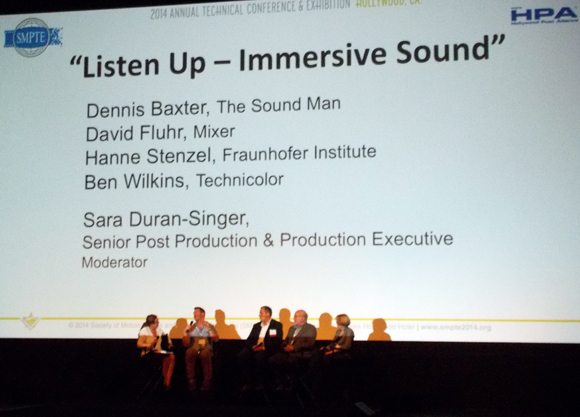 After the immersive visuals of Howard Lukk’s high dynamic range footage, the second afternoon session of the SMPTE 2014 Symposium deals with the subject of immersive audio. The panel discussion is moderated by Sara Duran-Singer, a senior post-production and production executive formerly with Walt Disney Studios. The panel itself includes Dennis Baxter, who has engineered and designed the sound for more Olympics telecasts and sporting events than anyone can count, Gabe Guy, a sound mixers from Walt Disney Studios, Hanne Stenzel who is working in the field of 3D audio at the Fraunhofer Institute and Ben Wilkins a sound designer and mixer at Technicolor.

The opening remarks touch on the first immersive audio technology developed by Iosono back in 2004, bringing us into the present day with Dolby Atmos and Barco Auro. Duran-Singer asks the panel the benefits of immersive sound.

“At Disney we’re really into immersing the audience and providing the audience with new experiences” Guy answers. His team is trying to elevate what all the artists have created onscreen with audio of a similar caliber. He is mixing in “native Atmos” by listening and monitoring in an 11.1 setup. His group will then listen to the 7.1 and 5.1 fold-downs “just to hear what it sounds like”.

Most, if not all, of Guy’s experience in immersive audio is with Atmos and he reports the new technology hasn’t made the post-production process more complicated. “We wouldn’t be able to do something like Atoms if it added a lot of time or complexity,” he says. “We managed to make it work in our existing workflow so that it adds as little as one day. We’re able to do all of that complexity and work up front. Our whole goal is to not add additional time and treat it as much like a normal mix as possible.”

As for specific benefits Guy tells the symposium attendees, “It’s taken the handcuffs off. It allows you to be more specific and take dialogue off the screen. The effects are much more precise in panning. The composers said they really enjoyed hearing their scores on Atoms because it can separate out the instruments.”

Guy also appreciates the way individual characters and their dialogue can be separated during action sequences.

Whether to add immersive audio to a production is always a decision that comes down to money, adds Wilkins. “It’s the balance between art and commerce,” he says. “Is Atmos going to increase ticket sales?”

Certainly it can increase costs by a minimum of USD $10,000 and is a choice that is best made before post-production begins on a movie. “I don’t think I’ve ever worked on a show where they’ve ever gone back and said let’s make it Atmos,” states Wilkins. “It’s an economically and fairly tough decision to do that. It effects everything including how we record sounds.”

Wilkins believes as more theatres are outfitted for immersive audio, more productions will be returning to the mix stage to have Atmos or Auro added to them. This is especially true as immersive sound enters the home market.

“It provides an extra dimension for the audience but translating that to tickets hasn’t been determined,” says Wilkins about the economic considerations of mixing in immersive audio before going on to predict consumer electronic devices with the technology will begin entering the home en mass. “Ten years ago it would have been unthinkable to have 5.1 surround in the house. Now the immersive technology is there and it will get translated for the home. So it might not be only about ticket sales.”

The technology is moving fast too according to Wilkins, “Even a year ago it was pretty revolutionary. But now we’re working native in Atmos and Auro the whole time.”

Still there are some productions, like independent films, which might not benefit from immersive sound. Wilkins worked on “Whiplash” which went on to win the Sundance Film Festival, but never could have been played at a festival in Atmos or Auro.

Wilkins also says that editing Atoms soundtracks can be different and at times more difficult, than traditional channel based audio, especially with fast cuts. This makes it difficult to use in trailers, especially since such material often has a quick turnaround time.

Guy agrees with Wilkins saying that slower editing and camera movements work better in immersive audio than, “quick stuff like swish pans that don’t work as well in Atmos.”

“What everyone is keen to avoid is the 3D thing where a character is going to point into the camera for no reason,” says Guy. “People are still finding their way with it.  It’s a great tool and it’s a sort of fun story telling arrow in our quiver,” Guy confesses, saying, “Sub-woofers on the ceiling have really expands the range and position of sounds.”

Baxter’s biggest gripe is with the manufacturer who make speakers for the home. For surround sound and immersive audio to take off in the home he believes such speakers should look more like furniture, be wireless, include the DSP chip and features such as self-calibration. “That’s what you’re going to start to see now thanks to the sound bar.”

Despite trying to learn as much as possible from motion picture audio technicians, immersive audio’s transition to television has been somewhat rocky. Baxter says, “What I like about working with Fraunhofer is they are creating something specifically for television rather than trying to repurpose movie technology for this bastard stepchild called television.”

However, before Stenzel from Fraunhofer can join the conversation, Baxter goes into more detail. He wants television to not only be immersive, but also interactive and intelligent. He sees interactivity as a game changer, even though such technology will take a lot of education for all members of the industry to learn how to use it properly. “It should be my vision,” proclaims Baxter of how he wants to hear television audio. “I should be able to mix it up the way I want to and then hit the reset button.”

This is a perfect setup for Stenzel whose research at Fraunhofer is focused on perceptive things. “What do you want to listen to and what is practical? What can you do on television?” she lists as some of the questions she’s trying to answer.

As well, Stenzel is concerning herself with, “How to transmit the sound to the listener at home, because right now Dolby has a system that works for cinema and DCP and they have their own system that works for Blu-ray.” On the other hand, a new codec for transmitting such immersive audio data into the home is being worked on that is very flexible and can do 22.2 audio with or without sound objects.

Stenzel heads to the podium where she uses a table to show how, by using an app, television viewers can switch between commentators of a live sporting event, change the language they are listening to, drill into whatever a race car driver might be seeing over their radio to a pit crew, etc. “That is how we envision TV to be like in three or four more years maybe,” she says.

To get there the, “Advanced Television Systems Committee (ATSC) standard needs to be updated” to include such features which is currently under way and should be done my the middle of 2015. The MPEG Group is working on standardizing the interactive audio. Then manufacturers have to start including the technology in products and broadcasters have to start utilizing the new features. There are a number of open questions surrounding transmission, metadata and other technical bits which Fraunhofer is currently working to resolve.

Duran-Singer asks what the future of immersive audio is and what their hope is for the technology. “Immersive sound will be another tool,” says Guy. “It will be readily available at your local theatre. There are certain films that lend themselves to it and others that don’t. Hopefully from a consumer side they’ll become more aware of it.”

“I’ve never heard anyone complain that they got sick from listening to immersive audio unlike 3D movies,” jokes Stenzel.

“Don’t just push the ambient to the higher channels,” Baxter urges. “The beauty of sports is you don’t have to pay attention to it. That’s because of the sound. It pulls you back to the screen. You movie folks will be the ones to drive it immersive audio into the home and we’ll pick it up from there… And make it affordable please.”

We end with the inevitable question from the audience; which is better Dolby’s Atmos or Barco’s Auro? “The perfect answer is it shouldn’t matter,” Wilkins argues. “Essentially they do the same thing.”

He pauses for a moment to think about how to phrase his words properly. “Oh.. geez,” sighs Wilkins. “I don’t want to piss off Dolby or Barco. If you install the Barco system you have to take your screen down and install more speakers behind it. And that’s an expensive proposition since the screens can’t go back up. With Atmos you only place additional speakers on the sides and on the ceiling and leave the screen alone. Some exhibitors like that because its an economic consideration. Though creatively having the height channels and the sub channels behind the screen I did enjoy.

“I’d like to get away from words like Atmos and Auro,” he continues. “But if I were a theatre owner I’d like to know that I can put in a set number of speakers and play the next big blockbuster in immersive sound.”