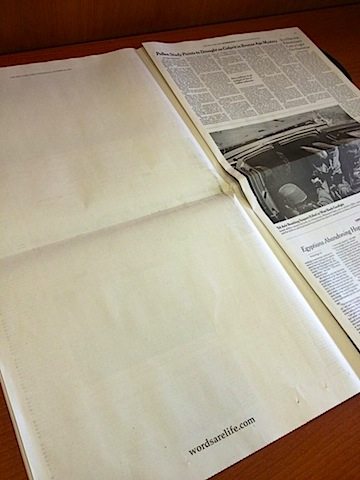 If you happened to pick up today’s print issue of the New York Times you may have been thrown by what looked like a printing error; pages 9 and 10 of the main A section were blank.

These were not, however, pages that slipped past the printing press untouched. Rather the blank pages were purposefully included as an advertisement for Twentieth Century Fox’s upcoming release “The Book Thief“.

While most print advertisements contain slick artwork or loads of text detailing a products attributes, the “Book Thief” promo takes the opposite approach of halting readers in their tracks and asking them to take the additional step of visiting a website to learn more.

Each page has the New York Times header, page number and date printed in its usual spot at the top of the page. The second “blank” page actually has “wordsarelife.com” printed at the bottom, which is the address of the film’s website.

“The Book Thief” is the film adaptation of Mark Zusak’s novel, which tells the story of a young girl living in Nazi Germany during World War II. Directed by Brian Percival and starring Geoffrey Rush and Emily Watson, the movie is slated for release on November 15th.

An announcement about the campaign from the New York Times Company explained:

The underlying message of the advertising campaign, “imagine a world without words,” echoes the film’s narrative, which follows a young girl in WWII Nazi Germany who begins to steal books from war-torn areas and share them with others.

The campaign has had the added benefit of generating news coverage from the likes of Deadline and Indiewire, which certainly helps build awareness of the film. Heck, even we’re writing about it.

What do you think of Fox’s promotional campaign for “The Book Thief”? Let us know in the comments section below.