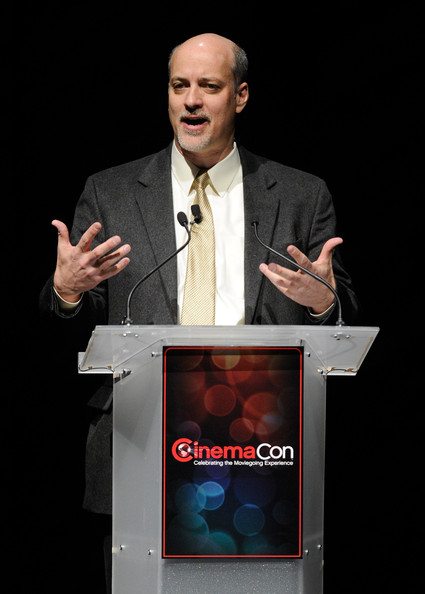 John Fithian, President of the National Association of Theatre Owners, gave his annual State of the Industry address yesterday at the trade group’s inaugural CinemaCon convention in Las Vegas. His speech covered all the necessary points while reiterating some of the comments about the digital cinema transition which Fithian has made to smaller groups over the past several months.

He began with a handful of statistics that highlighted some economic figures, including a global box office which climbed 30% over the past five years to reach USD $31.8 billion in 2010. North American box office receipts rose 15% to USD $10.6 billion in that same period, while inflation only rose 8%. In what was perhaps a jab at the studios rumored plans to begin offering new films via premium video-on-demand, Fithian compared these numbers to home video sales, which have declined 13% during the past five years.

Fithian also provided an update on North America’s digital cinema roll out, telling the audience of over 2,000 delegates that almost 16,000 screens, out of a total of 39,000 had been converted to digital. Nearly 9,000 of those screens are equipped for 3D projection. After running through more industry numbers than most could ever remember, Fithian paused as he came to the most important point in his speech:

“For any exhibitor who can hear my voice who hasn’t begun your digital transition, I urge you to get moving. The distribution and exhibition industries achieved history when we agreed to technical standards and a virtual print fee model to enable this transition. But the VPFs won’t last forever. Domestically, you must be installed by the end of 2012 if you want to qualify. Equally significantly, based on our assessment of the roll-out schedule and our conversations with our distribution partners, I believe that film prints could be unavailable as early as the end of 2013. Simply put, if you don’t make the decision to get on the digital train soon, you will be making the decision to get out of the business.”

Fithian went on to remark that admissions had climbed in each of the last four decades and that 3D grosses in 2010 made up 21% of total receipts, doubling the amount such films earned in 2009. However, his earlier comments about the ongoing digital cinema transition is what most of the show’s attendees focused on after Fithian’s speech concluded. Was it true that all cinema owners had to convert their screens to digital before 2012 to qualify for a VPF? Are studios really going to stop distributing 35mm film prints after 2013?

I lost count of how many exhibitors have stopped me in the hallways at Caesars Palace over the last two days to ask me these questions. The simple answers to both questions are sort of, and yet, not exactly. Which, in itself, underscores the uncertainty the industry has faced, and continues to grapple with, during the digital cinema roll out.

Keep in mind the position from which Fithian speaks. He is the head of NATO, many of whose members are part of the Cinema Buying Group. In April of 2008, after an extensive RFP process, CBG chose Cinedigm as its digital cinema deployment entity. Such installations would fall under Cinedigm’s Phase 2 VPF contracts which end around September of 2012. So, this is what Fithian is referring to when he says exhibitors need to have digital equipment installed by the end of 2012 (whether as part of the CBG or not).

What Fithian’s may not be taking into account is that Cinedigm is not the only deployment entity with VPF agreements in North America. I believe Sony’s VPF agreements extend beyond Cinedigm’s (though not by much) into 2013. Server manufacturer GDC has signed VPF agreements and it is rumored that projector manufacturer Christie is close to announcing their own VPF deals. However, Fithian is tasked with getting the best VPF agreement for as many of his members as is possible. Until the end of 2012, if a CBG exhibitor requires financing to convert to digital, the best deal may very well be with Cinedigm. That’s not to say the studios won’t enter into another VPF agreement with Cinedigm after the Phase 2 deals end, but they won’t be at the same level monetarily, and thus not nearly as beneficial as for exhibitors.

As to whether studios will continue to distribute 35mm film prints beyond 2013 nobody can provide an accurate answer to this question. Not even the studios themselves. As more theatre owners rollout digital equipment the studios will be making fewer film prints at a much higher cost, so sure they’d love to end 35mm distribution quickly. Distributing product in a world where half of all theatres require film prints and the other half need digital is costly since it destroys all economies of scale, not to mention increases operating costs.

Even after a majority of all cinema screens in the world have been converted to digital projection studios will probably still be willing to send a 35mm print to a theatre if they can make money off it. However, that doesn’t mean the exhibitor won’t be charged a premium for the creation of a film print. In short, film prints might still be around for many years to come, but possibly at a much higher price to exhibitors.

To be sure, you may want to fault Fithian for being an alarmist in regards to digital cinema, though he is trying to warn indecisive members that digital projection is no longer just for early adopters, that the VPF deals on the table today aren’t going to get any better over the next two years and that at some point the cost of distributing film prints will likely fall on the theatre owner.

On a lighter note, some of the other noteworthy facts Fithian provided were that moviegoers over 60-years-old purchased 11% of all movie tickets in 2010, up from 3% in 1975. Box office grosses outside North America accounted for 67% of global receipts and suprassed USD $20 billion for the first time ever. This was helped by grosses in Asia and Latin America which grew my more than 20%.