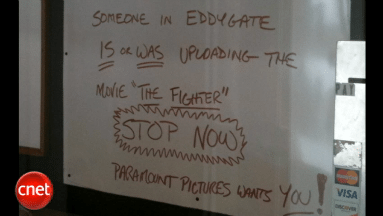 It looks as if the MPAA may be spying on college students, or at the very least monitoring their file sharing activity. Last week on CNET’s daily tech news podcast Buzz Out Loud the hosts read an email from a listener named Chris who explained how the MPAA has been leaving notes for students they believe are sharing movies online.

Illegal (and legal) file sharing is a constant topic of discussion on Buzz Out Loud as are the attempts of the MPAA and RIAA to prosecute those who participate in such activity. So Chris, a college student who lives in a dorm on the Cornell University campus, wrote in to pass along the news that the MPAA has identified his dorm as a den of illegal downloading. He writes (no emphasis added):

…my university (Cornell) has had run-ins with the MPAA and RIAA in the past over our school’s file sharing network. Everyday when I get back from class, I see a new notice on the message board in the lobby. About once a week there is a particular kind of message; this week’s reads:

‘Attention! Someone in Eddygate (my building) IS or WAS uploading the movie THE FIGHTER. STOP NOW!!! PARAMOUNT PICTURES WANTS YOU!!!

Last week it was ‘SONY PICTURES IS WATCHING YOU!’ for some other movie.

Are they now threatening college students specifically? … Are they possibly monitoring our specific building?… Are they really going through the effort to contact landlords and apartment managers to tell their residents to stop committing the ultimate evil?

Well Chris, the answer is that’s exactly what “they” are doing. The MPAA and RIAA have been tracking content being downloaded over file sharing networks for years now. In fact, companies such as BigChampagne even help record companies and movie studios know precisely how popular their content is on file sharing services.

The are two methods by which copyright owners and their agencies track down BitTorrent file sharers, both of which involve identifying the IP address that an infringer is using to connect to the internet:

More troubling was the email from another Buzz Out Loud listener which was read on the next day’s show. Dillon, also a student, explained how his university had actually taken measures to prevent file sharing through campus networks. Yet the last sentence of the email, delivered as a side note, may be the most telling by demonstrating a youth culture where file sharing isn’t seen as piracy or theft:

I am currently a student at the University of Michigan… Here, there is a campus wide WiFi network, that every student can access. While some of the dorms do not have WiFi, and still have to utilize Ethernet cables, it is strictly forbidden to set up your own network. If you do setup a network it may result in a fine or even being kicked out of the dorms. On a side note, upperclassmen usually suggest that students go to Starbucks to do their pirating, as the University networks are closely monitored by the MPAA and RIAA.

Changing this mindset in an entire generation of students is the uphill battle the MPAA is trying to win.