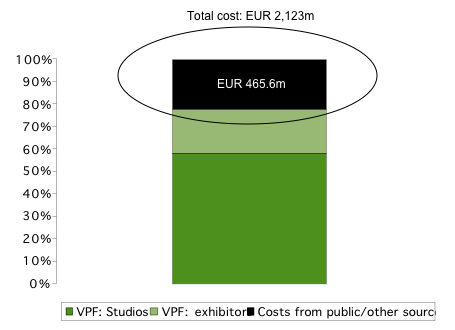 On June 21st, just in time for Cinema Expo, Screen Digest published a report titled “Digital Cinema Moves Into The Mainstream“. Twelve pages in length and with 10 tables and charts, the report uncovered a significant “digital shortfall” in the amount of financing required to convert all of Europe’s screens to digital. David Hancock, a senior analyst at Screen Digest, authored the report and we asked him to shed some light on its key findings. (The interview appears after the jump).

Details From The Report
Not counting Russia there are roughly 32,600 screens throughout Europe for which a digital rollout will cost EUR €2.1 billion (or USD $2.65 billion). Of those screens 23,800 are covered for digital conversion through virtual print fees offered by Hollywood studios. Upwards of 5,000 screens will be handled directly by theatre owners themselves. Theoretically that means there is funding of EUR €1.65 billion (or USD $2.1 billion) for d-cinema conversions, leaving a gap of EUR €450 million (or USD $568.4 million) to cover all Europe’s screens.

And who is being left out of the funding equation? Well, it’s mostly art houses, seasonal theatres, repertory venues and mobile cinemas.

The United Kingdom and The Netherlands have set up special funding groups to help solve this problem. Support funds have also been established in such countries as the Czech Republic, Finalnd, France, Germany, and Sweden. On region in Poland plans to pull money out of a tourism fund and Italy is giving tax credits to any theatre which converts. The European Union is offering assistance through its MEDIA Programme.

Driven mostly by 3D content, the number of European screens equipped for d-cinema at the end of the first quarter in 2010 had risen 16% over 2009 to 5,333, or a full 15% of the region’s screens. Presently 75% of all digital screens in Europe are 3D capabe. Thanks to competition among France’s largest exhibitors, the country leads the 3D screen count with more than 700. The U.K. and Germany are second and third hovering around the 500 screen mark.

A Conversation With David Hancock

Celluloid Junkie: How did you come up with the EUR €450 million? Was it simply adding the number of each integrator’s VPFs (by screen) and the amount of those VPFs? Are you guessing at the amount of the VPFs as it is often hard to find the exact dollar or euro amount of a VPF?

David Hancock: I did not have to come up with a VPF figure, as I did this the other way round. I took the number of screens that are targeted by a VPF programme, added the screens that will DIY (like Odeon), and subtracted the cumulative figure from 32,600 screens (EUR total). This leaves the number of screens that do not fit into an announced model, and then I applied a EUR figure for conversion (EUR €75,000) to those remaining screens. That is the shortfall.

CJ: Do you think the shortfall might have something to do with the VPF recoupment amount being different with each integrator?

DH: No, that is already factored in. I am not saying that these screens are doomed. The point is that for this shortfall, people are needing to be creative to find solutions. And they already are. Look at the UK Digital Funding Partnership (DFP), the funding group in the Netherlands, the French support scheme. All these initiatives are filling this shortfall.

CJ: There are five main integrators in Europe right now (AAM, Digital Finance Limited, Sony, XDC, Ymagis). Do you see any additional integrators springing up to help with the digital rollout?

DH: No, I don’t see any more of this type springing up, but I do see more targeted outfits appearing, with a specific group of screens in mind, such as maybe for local municipality screens in Poland. We already have the UK and Dutch groups, that are effectively acting as third-parties to organise a group of screens together.

CJ: At the Cannes Film Festival the Société des réalisateurs de films, the French Director’s Guild, warned that d-cinema is going to dilute French culture and will force a higher turnover of films. Is this a broad fear generating a lot of discussion? There was some talk that the E.U. might get involved or investigate. How likely is that?

DH: Has been for years, and still is a concern. The European Commission has been looking at this for two years or so and is developing a support fund to help some screens. European Cinemas also has a grant system in place for digital cinema. So, the EU is involved at that level, it is also investigating various aspects of digital cinema, such as the support funds being proposed by individual countries (e.g. Italian tax credit).

CJ: The growth in digital cinema seems to be mostly in Western Europe. What about Eastern Europe? Is there any movement there or signs of an
increased rate of conversion?

CJ: What kind of impact is alternative content having in the E.U.? Is significant revenue being earned?

DH: In revenue terms it not yet significant. However, many exhibitors are doing it, the number is growing as the digital base (and satellite base) grows, and I believe it will keep growing in coming years. We are currently looking at a contribution of less than 1% of box office and this will probably grow to around 2% to 2.5% by 2014.