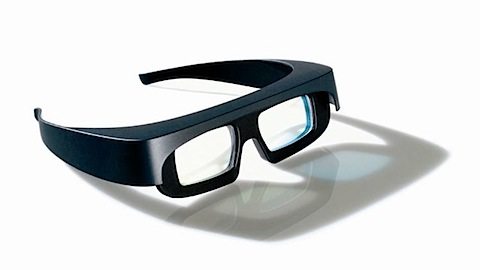 Earlier this week Panavision took their first public steps into the 3D motion picture exhibition market by announcing a new system that will work with all projectors, film or digital, and all screens, white or silver. While we had already reported that Panavision was working on such a solution, this was their first official statement about the product. The company, primarily known for high end motion picture camera systems, will demonstrate the system next week at Cine Expo in Amsterdam on a screen 56 feet wide (17 meters).

First let’s quickly review some of tech bullets all of which are the same as they were back in March when we first saw a demo:

Unlike systems that use polarization, the glasses are not reusable. Despite the less expensive material required to make glasses for polarization 3D systems, Galt explained, “The problem with polarization is that you have to maintain the polarization from the projector, to the screen back to the eyeball so it requires a metallic screen.” Because there is no polarization a white screen can be used, Panavision’s system is more comparable to Dolby’s 3D system.

The glasses for Panavision’s system has special lenses and will cost between USD $5 to $7 a pair. The company will provide a washer for the glasses which can clean 1,200 pairs per hour. Panavision feels that in territories such as Europe, the reusable glasses will be readily accepted, especially at low prices, since they cut down on ecological waist such as plastic wrappers, cardboard boxes and even freight.

Another competitive advantage Panavision sees is that the same system can be used with both film and digital, thus providing a “migration path” for exhibitors who might want to start out with film-based 3D. “You can start with film and migrate to digital without changing your operating procedures,” said Rodli. “The same glasses will work fine. It will make it seamless to the audience and we’re going to make it very attractive to the exhibitor to make that migration. It’s a fairly trivial and low cost transition.”

Speaking of cost, Panavision said they were still finalizing on the business model and are working with exhibitors and studios to discuss the best way, and best price, to bring the system to market. “We realize there is a competitive marketplace there so as good as the technology is, we have to find an economic model that will work for everyone,” Rodli stated. “We think we can.”

Whatever model Panavision adopts, whether it’s outright sale of the system or a lease agreement, it will definitely include an ongoing royalty payment. On the other hand, it may cost nothing to initially install the system.

“There are a lot of things that go into the negotation – the size of the screen, the number of screens involved, the term of the contract – so there is no one size fits all for this,” said Bevins when talking about pricing. “Leasing is in our DNA. We are not yet at a point where we’re absolutely clear what the business model is. Whether we will pay the upfront installation cost, pass it through, bill it up front. In fact that’s a negotiation we’ll have with everybody and that up front installation cost will be handled differently in each instance.”

While the idea of leasing 3D motion picture technology may seem like an odd model, it’s not such a foreign concept to Panavision. Keep in mind this is the same company that manufacturers multi-million dollar 35mm film cameras and rents them to individual productions. Indeed, Bevins reports that Panavision will continue to broaden their offerings in the industry.

“We think of ourselves as a very high end supplier of equipment for the motion picture industry,” he said. “As far as Panavision is concerned we will continue to be very opportunistic if we see a place anywhere in our base business to be of service.”

Panavision’s 3D system will be available to theatre owners worldwide sometime this fall.