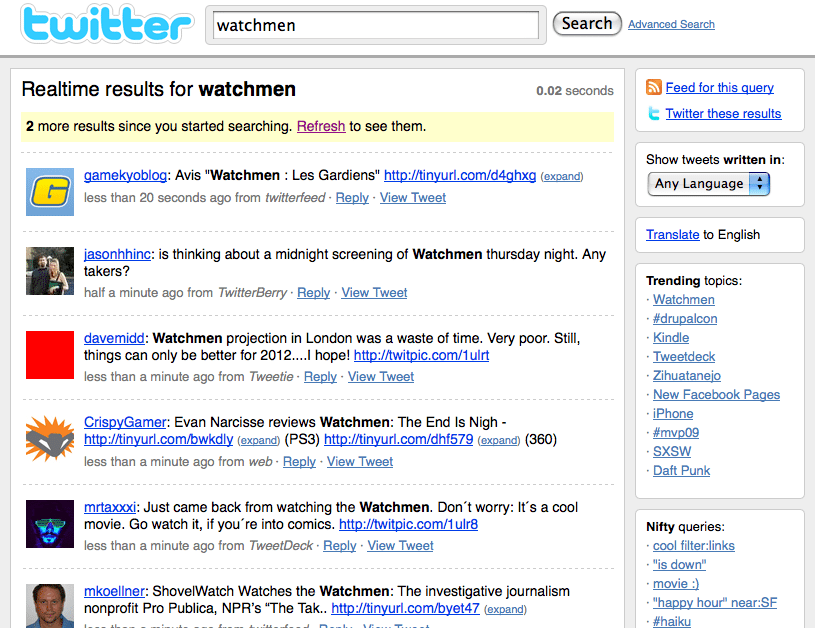 There used to be a time not so long ago, about two or three years, that motion picture distributors made many of their decisions about release patterns based on a weekly report produced by one third-party company; National Research Group. The company, founded in 1978, became a de-facto standard for market research within the film industry, especially when it came to test screenings and determining a movie’s release date. Today, thanks to the Internet, much of the work NRG does by polling potential moviegoers about their awareness of upcoming releases can be conducted in real time using websites such as Facebook and Twitter.

Earlier this week while checking my Twitter timeline I noticed that a lot of the people I follow on the micro-blogging site were posting messages about Warner Bros. tent pole release, “Watchmen”. This wasn’t so surprising since I follow a lot of entertainment journalists and film industry professionals and the movie was opening in just a few days. However I wondered how many other people were posting 140 character messages about the film. A quick query “Watchmen” on Twitter’s search page proved to be a wonderful example at how effective the service can be in providing an instant read on whether people were aware of the movie and what they were saying about it. The following screenshot was taken on Tuesday morning:

Not only were the site’s users talking about “Watchmen”, but it was the number one topic found in posts on Twitter, as can be seen in the Trending Topics section on the right hand side of the page. What makes this even more meaningful is that Twitter has millions of daily users posting tens-of-millions of messages 24-hours per day. For a topic to reach the top of the trending list on the search page is no easy task. As you can see from the screenshot, even seconds after the search was conducted two additional messages with the word “watchmen” had been posted. Users were posting links to reviews and some were even planning group trips to screenings of the film (see post from @jasonhhinc).

I revisited the search page several times during the course of this past week at all hours of the day and night. What I noticed was that during the daytime, when North American users were providing the majority of posts “Watchmen” was always found in the top trending topics list. At night, when Twitter users from Europe and Asia are predominantly online “Watchmen” began to drop to lower spots on the list and at times fell off it completely. As the week progressed messages about the film turned from discussions on when users were going to see the film to one sentence critiques from those who had just gotten out of early showings. On Friday links to reviews from both mainstream and online media were posted by the thousands.

All of this can be both good news and bad news for a distributor. Trying to create positive word-of-mouth about release is made all the more easy with sites like Twitter, though if opening weekend audiences begin to turn on a film, the word spreads like wildfire and no amount of advertising may help increase box office grosses.

Today, NRG is a part of Nielsen Media and has been folded into the monolithic market research firms’ Bases division. The weekly “Competitve Positioning” report, once coveted by industry execs eager to learn how a movie was “tracking”, isn’t even listed on their website. Whether NRG still distributes the report or even if  industry interest has waned I can’t say. Certainly there is some value in the kind of demographic data collected by NRG’s telephone polls. Twitter can’t tell you how many women over the age of 25 know about a particular movie nor how likely there are to see it opening weekend. All it can do is inform you that the technologically savvy masses that use the site are aware of a film and what they are saying about it. And there is no analysis of the constant raw data stream Twitter spits out, like there would be with Nielsen.

Still, I can’t help but think, like newspapers, NRG’s product may be facing stiff competition these days from more timely online resources.