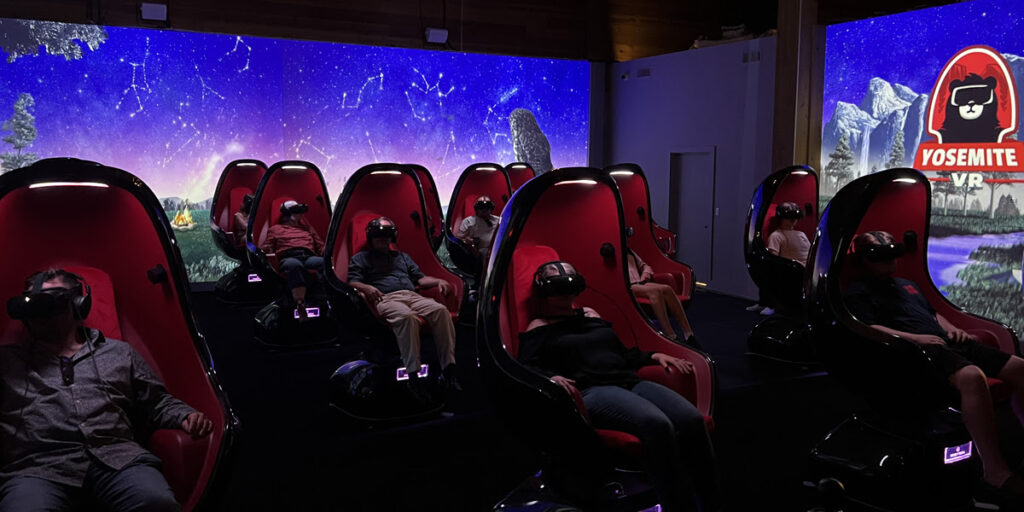 In addition to Experience Yosemite, the Positron XR Cinema will feature a slate of VR films from award-winning creators and directors, taking guests into places they may never visit on their own, such as outer space or the top of Everest.

“We are excited to bring this futuristic technology to Yosemite Cinema and allow visitors to experience Yosemite National Park in a way that they otherwise never could,” said Keith Walker, CEO of Yosemite Cinema.

“Positron is proud to partner with Yosemite Cinema to launch the first permanent XR Cinema in North America with its most advanced Voyager VR chairs showcasing premium content. With millions of visitors coming to Yosemite National Park every year, we expect this immersive experience to become a highly popular attraction,” said Jeffrey Travis, CEO of Positron.

“This was a labor of love and being able to share the awe-inspiring experience at a theater of this caliber is a great honor,” said Joel Newton, co-founder of City Lights and director of Experience Yosemite. “We’re excited to have the audiences immerse themselves in the film and revel in the beauty that is Yosemite.”

The Positron XR Cinema at Yosemite Cinema opened to the public on July 11. Tickets are available at www.yosemitecinema.com

About Yosemite Cinema: Yosemite Cinema is a five-screen movie theater situated in the mountains at the entrance to Yosemite National Park. With this announcement, it is now the only permanently installed VR Cinema in North America. Yosemite Cinema will primarily be exhibiting “Experience Yosemite”, which was made specifically for this location, at the VR Cinema but will also be showing other Theatrical VR Content and it is planning to host VR Film Festivals in the future.

About Positron
Positron is an immersive entertainment and technology company. Positron produces and distributes premium cinematic VR experiences and films, on our award-winning patented Voyager VR motion chairs featuring haptics and scent. Positron XR Cinemas featuring the motion chairs and award-winning content are in over a dozen locations around the globe, in museums, theaters, and tourist destinations. Named by Fast Company as a “Top 10 VR/AR Company”, Positron leads the industry for seated immersive experiences. For more information, visit http://gopositron.com

About CITYLIGHTS
CityLights specializes in bringing immersive cinematic storytelling to broader audiences, showcasing the type of experience that is only available in Virtual Reality (VR). They develop, produce, and publish VR projects that entertain, inspire, and educate, crafting the highest quality productions that usher in the future of storytelling in the meta. Their mission is to become the custodians of a library of premium titles that exemplify this ground-breaking generation of immersive media. Co-founded by arts patron, collector, and entrepreneur, David Ganek, and award-winning film producer and VR pioneer, Joel Newton, CityLights is uniquely positioned at the cornerstone of this dynamic and emerging industry.

About Visit Yosemite | Madera County
Formed in 1985, Visit Yosemite | Madera County’s mission is to draw the millions of Yosemite National Park visitors to its gateway’s many businesses and attractions. We invite visitors to take a journey from the Fossil Discovery Center to the Madera Wine Trail and onward into the High Sierra. Discover incredible dining, talented tradespersons, four seasons of water sports at Bass Lake, the Yosemite Mountain Sugar Pine Railroad, and mighty adventures right up to the massive Giant Sequoia trees. Madera County is the gateway to so much more.