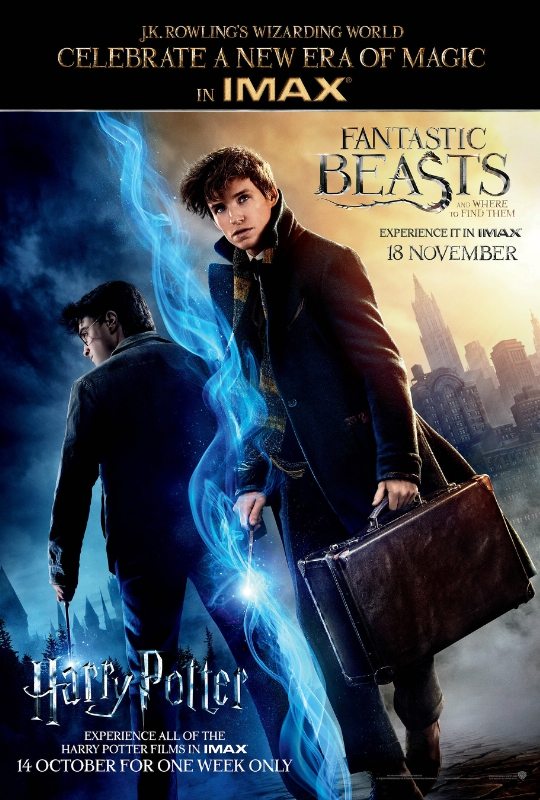 Weeklong Engagement Marks the First Time All Eight Films Will Screen in IMAX - Punctuates Global Fan Event on Oct. 13 Celebrating A Return to J.K. Rowling's Wizarding World and Fantastic Beasts and Where to Find Them

In anticipation of the global IMAX release of Warner Bros. Pictures’ “Fantastic Beasts and Where to Find Them” beginning the weekend of November 18, IMAX Corporation (NYSE: IMAX) and Warner Bros. Pictures today announced that all eight “Harry Potter” films will screen for the first time in domestic IMAX locations for an exclusive one-week engagement beginning October 13. The event, which will build on the growing excitement surrounding J.K. Rowling’s Wizarding World franchise, marks the first time both “Harry Potter and the Sorcerer’s Stone” and “Harry Potter and the Chamber of Secrets” will be digitally re-mastered into the immersive IMAX format and released in IMAX theatres.

Kicking off the weeklong “Harry Potter” engagement will be a global fan event on Oct. 13 celebrating the upcoming release of “Fantastic Beasts and Where to Find Them”. Fans attending the event at select IMAX theatres in the U.S. and internationally will be treated to a never-before-seen reel from the much-anticipated new film, as well as in-person appearances by talent from the film at two IMAX locations in London and Los Angeles, a live Q&A and more.

The “Harry Potter” engagement will screen in IMAX 2D and also feature additional content from “Fantastic Beasts and Where to Find Them”, including the exclusive reel from the fan event and specially recorded greetings from star Eddie Redmayne and other talent.

“‘Harry Potter’ is one of the most beloved film franchises of all time and is incredibly important to the history of IMAX. Therefore, being able to offer each installment—especially the initial two for the very first time in IMAX—makes this a truly magical event for fans,” said Greg Foster, CEO of IMAX Entertainment and Senior Executive Vice President, IMAX Corp.

Tickets will be available by means of four separate admission packages: Single Ticket; Day Access (admittance to three or more shows in a single day); Four-Show Access (admittance to four shows any time, any day); and Festival Access (unlimited admittance throughout the event). Packages offered and pricing may vary by theatre.

Event tickets are on sale online and at participating IMAX theatres. Visit IMAX.com/HarryPotter for additional event details, all movie showtimes, and to purchase tickets.

The IMAX release of each film will be digitally re-mastered into the image and sound quality of The IMAX Experience with proprietary IMAX DMR (Digital Re-mastering) technology. The crystal-clear images, coupled with IMAX’s customized theatre geometry and powerful digital audio, create a unique environment that will make audiences feel as if they are in the movie.

IMAX is headquartered in New York, Toronto and Los Angeles, with offices in London, Tokyo, Shanghai and Beijing. As of Jun. 30, 2016, there were 1,102 IMAX theatres (990 commercial multiplexes, 16 commercial destinations and 96 institutions) in 69 countries. On Oct. 8, 2015, shares of IMAX China, a subsidiary of IMAX Corp., began trading on the Hong Kong Stock Exchange under the stock code “HK.1970.”

IMAX, IMAX 3D, IMAX DMR, Experience It In IMAX, An IMAX 3D Experience, The IMAX Experience and IMAX Is Believing are trademarks of IMAX Corporation. More information about the Company can be found at www.imax.com. You may also connect with IMAX on Facebook (www.facebook.com/imax), Twitter (www.twitter.com/imax) and YouTube (www.youtube.com/imaxmovies).