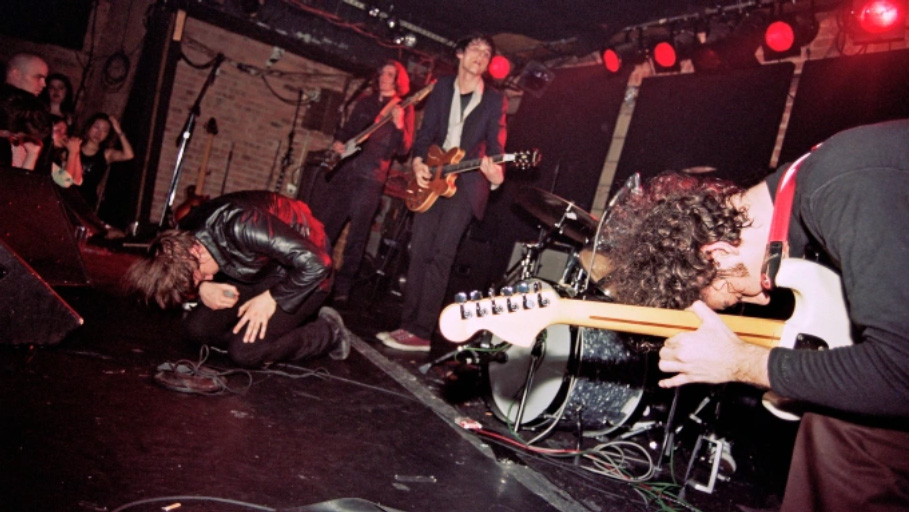 Based on the hit 2017 oral history of the same name by Lizzy Goodman, “Meet Me in the Bathroom” tells the story of the last great romantic age of rock ‘n’ roll and how bands like The Strokes, LCD Soundsystem, Yeah Yeah Yeahs and Interpol delivered a jolt of manic energy to a reeling, post-9/11 New York, imbuing a generation with a renewed sense of the power of music to change everything.

Combining archival footage, audio interviews, and never-before-seen photos and video, the film has been praised as a “A vivid time capsule of New York rock culture at the turn of the millennium” (Variety), and “a tremendous document of one of the most integral musical periods of our time” (Collider). “Plus: the music, pretty uniformly, rips” (Pitchfork).

“Lizzy’s book told the story of a time and a place that was incredibly resonant for us personally, so the prospect of adapting it for the screen was one that we jumped at,” said filmmakers Will Lovelace and Dylan Southern. “Our hope was to make a film that acts as a time capsule. We weren’t looking to tell the complete history of each band, as the world has changed so much since the years covered by the documentary. We wanted to create a vivid distillation of a music scene, a time and a place, and in doing so explore something universal about youth and creativity.”

“The bands in ‘Meet Me in the Bathroom’ brought back an edge and personality to alt rock music and crossed into the global mainstream in the early 2000s, when everything in music seemed repetitive and fabricated,” said Utopia’s co-founder, Robert Schwartzman. “Utopia’s team has a personal and emotional connection to this era of New York culture and the many artists who helped shape this time and place. We are so truly honored to be a part of this film’s journey and cannot wait to celebrate the filmmakers long awaited documentary after its well-received Sundance debut.”

“We are thrilled to be partnering with Utopia on ‘Meet Me in the Bathroom,’ a rousing look at a seminal moment in both the history of rock music and the city of New York,” said Kent Sevener, EVP, Content Acquisition, Showtime Networks Inc. “With its dynamic archival footage and electrifying soundtrack, MEET ME IN THE BATHROOM will be a unique addition to the Showtime documentary slate.”

This deal was negotiated by Danielle DiGiacomo for Utopia with UTA Independent Film Group on behalf of the filmmakers. Goodman is represented by UTA and 3 Arts Management.

About Utopia
Utopia is a film distribution and sales company that specializes in independent and documentary cinema. Recent Utopia titles include Independent Spirit Award winner “Shiva Baby” by Emma Seligman; Dasha Nekrasova’s Berlinale premiere “The Scary Of Sixty-First;” and Cinema Eye Award winner “El Planeta” from Amalia Ulman. Upcoming releases this year include Cannes and NYFF selection “Vortex” by Gaspar Noe; Jane Schoenbrun’s “We’re All Going To The World’s Fair;” and Lena Dunham’s anticipated follow-up to “Tiny Furniture,” “Sharp Stick.” Utopia has since launched Utopia Originals, a division dedicated to the development, packaging, and sales of original film and television content. Its most recently announced project is a Blues Brothers docu-series with Dan Aykroyd and the John Belushi Estate.

About Showtime
Showtime Networks Inc. (SNI), a wholly owned subsidiary of Paramount, owns and operates the premium service Showtime, which features critically acclaimed original series, provocative documentaries, box-office hit films, comedy and music specials and hard-hitting sports. Showtime is available as a stand-alone streaming service across all major streaming devices and Showtime.com, as well as via cable, DBS, telco and streaming video providers. SNI also operates the premium services The Movie Channel and Flix, as well as on demand versions of all three brands. SNI markets and distributes sports and entertainment events for exhibition to subscribers on a pay-per-view basis through Showtime PPV. For more information, go to www.SHO.com.

About Pulse Films
Pulse Films is an award-winning, independent studio encompassing the development, production, financing and distribution of cross-platform content for audiences worldwide. Part of the Vice Media Group, the studio is headquartered in London with outposts in Los Angeles, New York, Berlin and Milan. Pulse Films is dedicated to creating moments of culture through innovative storytelling and operates under the following divisions: Scripted, Non-Fiction, Commercials and Music Videos.

The highly decorated studio has taken home prestigious awards such as, Emmy’s, Grierson, British Arrows and the Cannes Jury Prize, and regularly features in the top 3 of Televisual’s 100 Production Survey and was awarded Production Company of the Year by Campaign in 2021.

Pulse Films’ most recent productions include series 2 of the record-breaking, critically acclaimed series and Emmy and BAFTA-nominated “Gangs of London” for Sky Atlantic and AMC; Sundance Film Festival 2022 music documentary hit “Meet Me in the Bathroom,” and HBO Max and Sky co-pro “Harry Potter: 20th Anniversary Return to Hogwarts.”

About XTR
XTR is a premium global nonfiction entertainment studio. With a focus on audience appeal and a commitment to artistry, the award-winning studio works with outstanding creators to produce, distribute, finance, and develop films, series, and podcasts. Since its inception in 2019, XTR has produced and financed over 80 documentaries, including “They Call Me Magic,” on AppleTV+; MTV Documentary Films’ Oscar-nominated “Ascension”; and the Emmy and Peabody award-winning “76 Days.” In 2021, XTR launched Documentary+, an AVOD platform and FAST channel that brings the best in nonfiction film and television to over 80 million households in the US and nearly every country globally. XTR – based on a true story.