UNIC’s Update on Cinema-Going in 2018 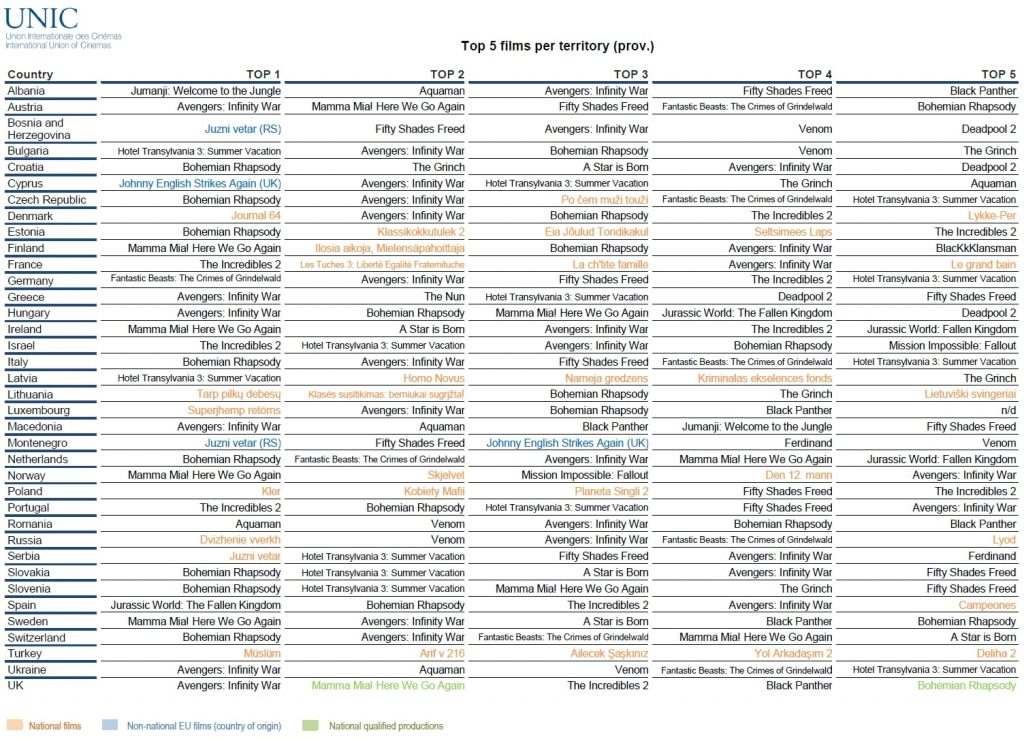 UNIC: Over 1.25 Billion Cinema-goers in Europe for Fourth Consecutive Year

The International Union of Cinemas (UNIC), the body representing European cinema trade associations and operators, has today released its provisional update on admissions and box office revenues across Europe for 2018.

While some data remains to be collated and figures for certain territories are based only on initial estimates, the overview provided by UNIC represents the first wide-ranging assessment of the performance of the European cinema sector in 2018. More detailed final data on the performance of each territory will be released in Spring 2019.

Across 2018, cinema-going in Europe decreased by approximately 3.3 per cent following a record-breaking previous year, yet still totalled over 1.25 billion admissions and € 8 billion* at the box office for the fourth year in a row. Total admissions for EU Member States (where data was available) decreased by 2.9 per cent, with close to 950 million visits to the cinema.

Despite continued investment in technology and audience development initiatives, cinema operators across the region experienced mixed performances, with a combination of different factors – including a particularly warm summer and the FIFA World Cup – contributing to a dip in attendance in several leading European territories. Box office was mainly driven by international titles, including, but not limited to, Avengers: Infinity War, Bohemian Rhapsody, The Incredibles 2, Mamma Mia! Here We Go Again and Hotel Transylvania 3: Summer Vacation.

Record performances in the UK, Turkey, Poland and Romania

Despite a very slight dip of 0.1 per cent in box office results, UK exhibitors enjoyed a record-breaking year with over 177 million admissions, the highest level of cinema-going since 1970. Similarly, Polish cinemas attracted almost 60 million cinema-goers, a 5.5 per cent year-on-year increase, bolstered by three local productions leading at the box office including Kler and Kobiety Mafii. Even more impressively, Romania almost quadrupled its cinema attendance in the last ten years, with a record 14.5 million tickets sold in 2018, as box office increased by 12.5 per cent. Finally, Turkish cinemas attracted over 70 million cinema-goers for the second year in a row, with a record-breaking 62.9 per cent national films’ market share led by the local production Müslüm.

While France experienced a 4.3 per cent decline in attendance, French exhibitors still attracted over 200 million cinema-goers and enjoyed a record market share for national films of almost 40 per cent, with three local films in the box office top five. The same trend could be observed in Spain (box office    -1.9 per cent / admissions -2.0 per cent), finishing just shy of the symbolic 100 million admissions mark. Russia – after outperforming France in 2017 as the leading European territory in terms of cinema admissions – experienced its second-best year ever, despite a 5.7 per cent decrease in admissions, as local film Dvizhenie vverkh led at the box office.

Continued growth in CEE and the Balkans

Admissions per capita, share of European films, outlook for 2019

Admissions per capita for all UNIC territories (where data was available) remained stable at 1.5 visits per year.

France and Ireland (at 3.2 and 3.3 respectively) again experienced the highest rates of cinema-going.

Due to incomplete figures for several countries, it is too early to assess the total market share for European films in 2017. Turkey (62.9 per cent), France (39.3 per cent) and Poland (35.5 per cent) experienced the highest national films’ market share across UNIC territories.

The industry looks forward to a particularly busy and promising release schedule in 2019, packed with highly anticipated European as well as international titles.