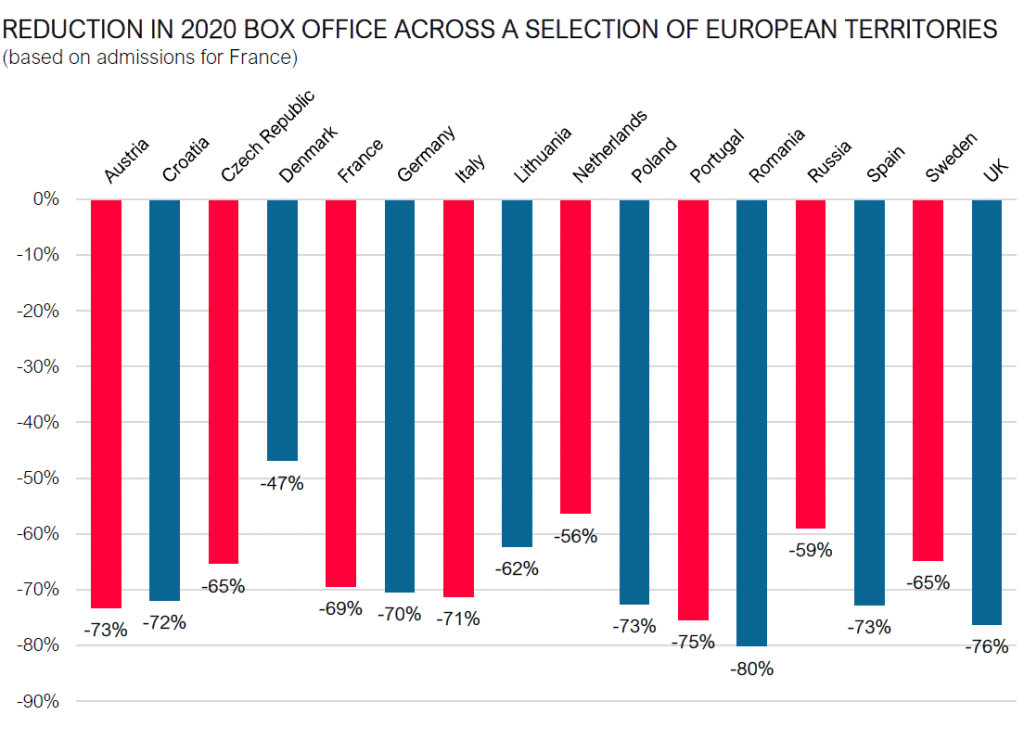 The International Union of Cinemas (UNIC), the body representing European cinema trade associations and operators, has today released preliminary 2020 box office estimates for the territories covered by the organisation.

European cinemas saw a 70.6% drop in box office in 2020, accounting for a total decrease of €6.2 billion in revenues compared to 2019. A similar 69.0% reduction could be observed in the European Union, resulting in a €4.0 billion drop in revenues. These challenging figures are the direct consequence of the impact on the cinema industry of the COVID-19 pandemic which has caused months of complete closure and occupancy restrictions across Europe and globally.

These figures come after a very successful 2019, when European cinemas grossed over €8.8 billion at the box office and attracted more than 1.34 billion cinema-goers. In the European Union, cinemas had recorded their best results for 15 years, with admissions reaching the 1 billion mark for the first time since 2004.

Additional impacts on revenues – such as lost concession sales and screen advertising income as well as cancelled events – have put the cinema industry under significant financial strain, with thousands of staff members furloughed in the past months.

Despite all of these unprecedented challenges, cinema operators have shown their resilience and capacity to adapt, preparing and implementing detailed health and safety guidelines while launching reopening campaigns, all to ensure the safe return of staff and cinema-goers. Despite a lack of new film content, in particular from the major US studios, cinemas have shown their essential role in the promotion of local content and European culture. With the support of local distributors and producers, national films’ market share reached new heights across the region, such as in Denmark (49.4%), Czech Republic (46.4%), France (44.9%), Italy (56.6%), Russia (46.9%) and Poland (50%). In total, 15 European territories registered a market share for national films of above 25%, as audiences returned during Summer 2020 to enjoy the sorely-missed experience of enjoying a film together, on the Big Screen.

National governments and European institutions have introduced various support schemes since the start of the crisis, which have been crucial to cinema operators. But the crisis is far from over, with most European cinemas still closed as of publication of this press release. UNIC urges policy-makers at the local, national and European level to enforce strong recovery strategies to ensure that European cinemas – of all sizes and all locations – can survive this challenging period and be once again the vibrant home of culture, freedom and community that they always have been.

About UNIC
The Union Internationale des Cinémas/International Union of Cinemas is the European grouping of cinema trade associations and key operators, covering 38 territories across the region. We promote the cultural, social and economic benefits of a vibrant cinema-going culture in Europe and provide a strong and influential voice for European cinema operators on issues of shared interest.