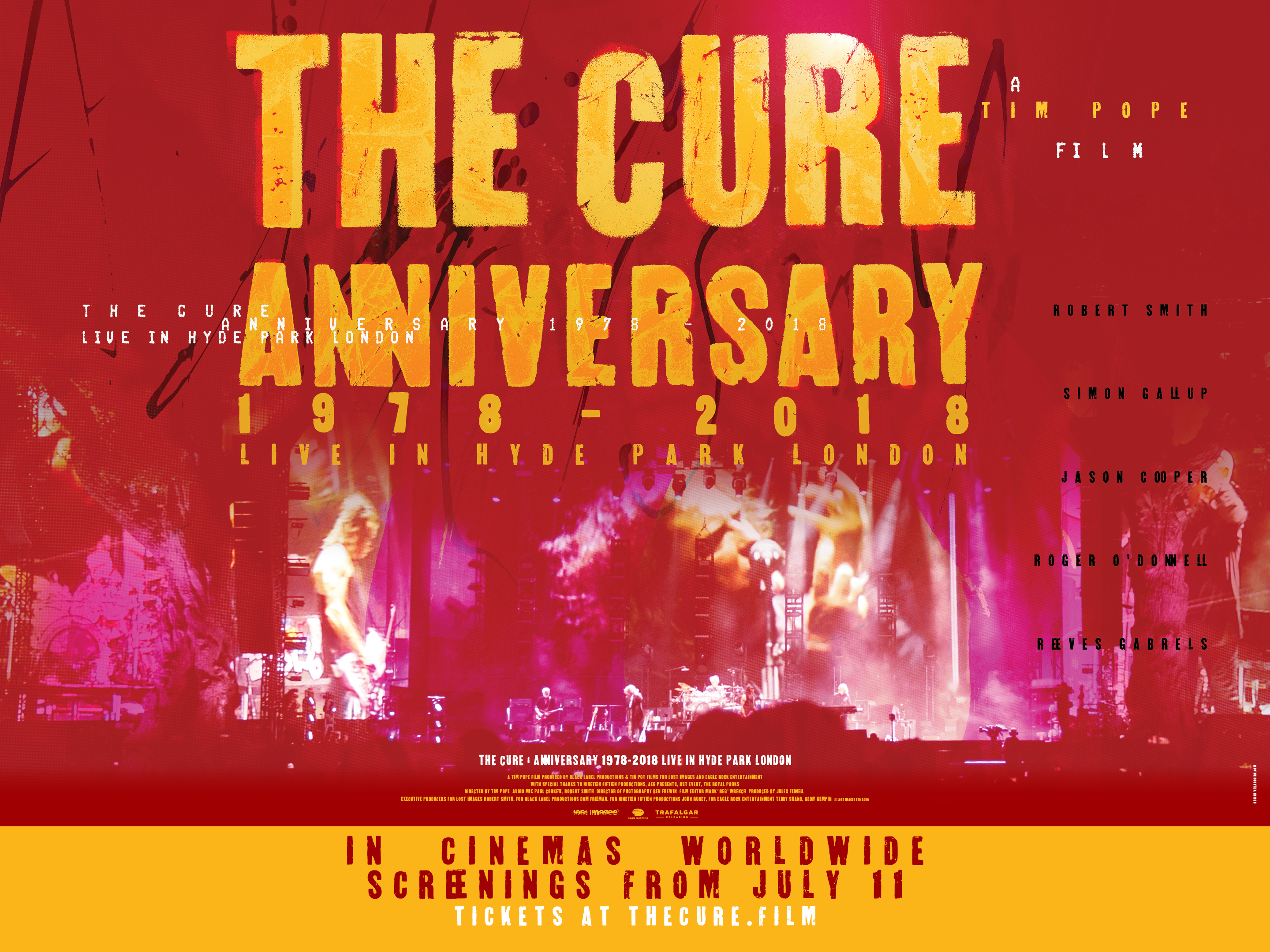 In collaboration with Eagle Rock Entertainment, the film captures the acclaimed Hyde Park gig celebrating 40 years of The Cure

London, UK (May 31, 2019) – Trafalgar Releasing, in collaboration with Eagle Rock Entertainment, announced the global cinema release of The Cure – Anniversary 1978-2018 Live in Hyde Park London, celebrating 40 years of The Cure, cementing them as one of the defining rock bands of music history.

The film, slated for release from Thursday 11 July, sees The Cure take the stage on a perfect July evening in London’s Hyde Park to deliver a set of a songs celebrating four decades of music making.

From Lovesong to Lullaby, from Boy’s Don’t Cry to Burn, from Fascination Street to Friday I’m In Love, Robert Smith and his extraordinary band – Simon Gallup, Jason Cooper, Roger O’Donnell and Reeves Gabrels – take us on a magical trip through time.

The now seminal gig received widespread critical acclaim including five stars from The Independent, calling it “a perfect set”. Rolling Stone said there was a “unique power in The Cure’s live performance”, whilst NME called it “epic” and The Metro awarded four stars saying that the show was a “testament to how iconic The Cure’s music is that ticket-holders covered all generations”.

Lead singer of The Cure, Robert Smith says: “This really was the perfect way to celebrate 40 years of the band. It was a fabulous day none of us will ever forget.”

Marc Allenby, CEO at Trafalgar Releasing added: “The influence and impact of The Cure is unquestionable and last year’s 40th anniversary concert captured the band at their very best, representing the breadth of their amazing career. It’s a great honour for Trafalgar Releasing to be given the opportunity to work on this theatrical release and we look forwarding to sharing this special film with fans in cinemas around the world.”

Director, Tim Pope says on the film: “Working alongside Robert for these 37 years of the band’s 40-year history – and also having previously filmed the band for the 35mm ‘In Orange’ 1986 concert film – I wanted cinema-goers to feel like they were in the thick of the action, in the heart of the music. Our film really captures the true power and passion of The Cure’s music for a global audience.”

The event will be screened in cinemas around the world on Thursday 11 July. More information can be found at thecure.film, where fans can sign up for event alerts, including notifications for when tickets go on-sale.

This news follows other recently announced music acquisitions from Trafalgar Releasing including hit Tribeca Film Festival music documentary Between Me and My Mind featuring Phish frontman Trey Anastasio and the latest film from Roger Waters based on his US + THEM World Tour. Other recent music releases from Trafalgar Releasing have included The Music Center presents Joni 75: A Birthday Celebration, Coldplay: A Head Full of Dreams, Burn the Stage: the Movie, Muse Drones World Tour and Distant Sky: Nick Cave and The Bad Seeds Live in Copenhagen.