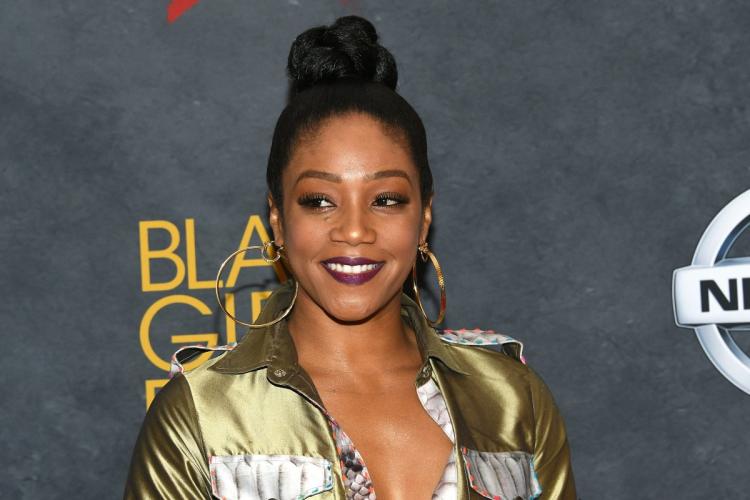 Haddish’s Next Film, “Night School,” to be Released by Universal Pictures on September 28, 2018

Tiffany Haddish will receive the “CinemaCon  Female Star of Tomorrow Award,” it was announced today by Mitch Neuhauser, Managing Director of CinemaCon. CinemaCon, the official convention of The National Association of Theatre Owners (NATO), will be held April 23 – 26, 2018 at Caesars Palace in Las Vegas. Haddish will be presented with this special honor at the “CinemaCon Big Screen Achievement Awards” ceremony, which takes place on the evening of Thursday, April 26, at The Colosseum at Caesars Palace, hosted by the Coca-Cola Company—the official presenting sponsor of CinemaCon.

“Since breaking out on the big screen with her showstopping role in “Girls Trip,” Tiffany Haddish has established herself as one of the most sought-after comedic talents in film,” noted Neuhauser. “With her unfiltered confidence and signature humor, she is sure to have audiences rolling in the aisles for years to come.”

On September 28, 2018, Haddish can be seen starring alongside Kevin Hart in “Night School.” Hart and producer Will Packer, who partnered for the hit “Ride Along” and the “Think Like a Man” series, bring their signature style to the film that is based on a story by Hart. The comedy from Haddish’s “Girls Trip” director Malcolm D. Lee  follows a group of misfits who are forced to attend adult classes in the longshot chance they’ll pass the GED exam. Co-stars Taran Killam, Rob Riggle and Romany Malco join Hart and Haddish on-screen for the film that Hart produces for his Hartbeat Productions, and Packer via his Will Packer Productions.

First showing her talent for stand-up comedy as a child, Haddish was steered toward stand-up by her social worker, who enrolled her into the Laugh Factory Comedy Camp for children. She was an early comedic standout who first appeared on “Def Comedy Jam,” “Who’s Got Jokes?” and “Reality Bites.” In August 2017 she debuted her first comedy special for Showtime, titled “Tiffany Haddish: SHE Ready! From the Hood to Hollywood.” On the small screen, she was a series regular on NBC’s “The Carmichael Show” and landed recurring roles on the soap-opera series “If Loving You Is Wrong” and “Real Husbands of Hollywood.” She can next be seen starring alongside Tracy Morgan in the new series “The Last O.G.” She recently starred on the big screen in the blockbuster “Girls Trip” and in “Keanu.” In addition to “Night School,” she is currently developing “Limited Partners” and “The Temp,” both in which she will executive produce and star. Haddish has also released her memoir, The Last Black Unicorn, which made “The New York Times” bestseller list. She recently became the first black female stand-up comedian to host “Saturday Night Live.”