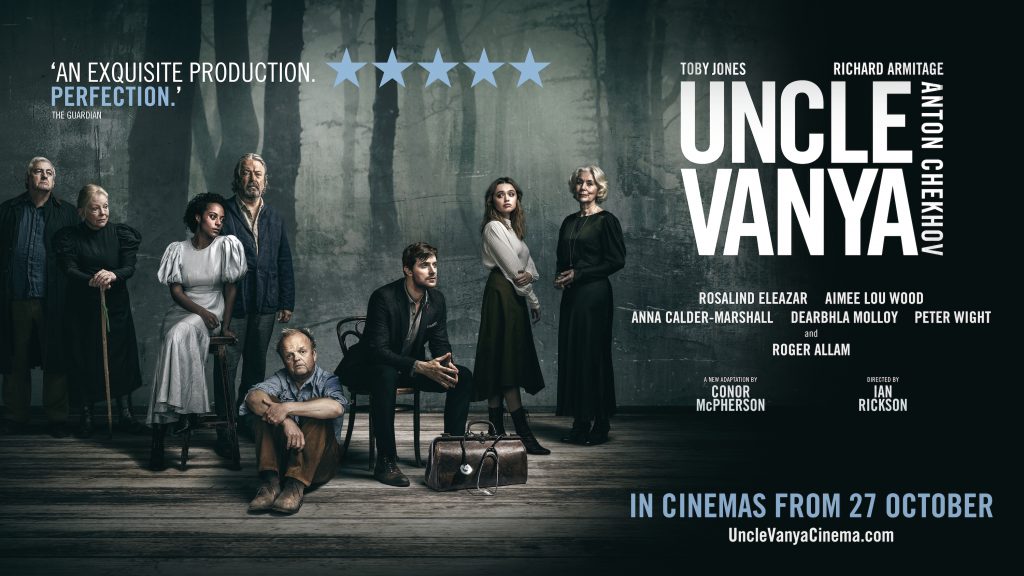 London-based Event Cinema specialist More2Screen has been appointed by Sonia Friedman Productions and Angelica Films (an All3Media company) to distribute “Uncle Vanya”, Ian Rickson’s highly acclaimed production of Conor McPherson’s new adaptation starring Toby Jones and Richard Armitage, to cinemas across the UK, Ireland and internationally from 27 October 2020. This special cinema event will only be available for a limited run in Autumn 2020. Tickets are on sale now at UncleVanyaCinema.com

Sonia Friedman Productions and Angelica Films are co-producing a sumptuous re-interpretation of Ian Rickson’s stage production. Marrying the intimacy of the big screen with the electricity of live performance in an exciting combination of film and theatre, this is not simply a capture of the play, but a new and exhilarating hybrid artform. The West End stage production was half-way through a sold out run when the Coronavirus pandemic forced theatres across the world to close. It has garnered huge critical and public acclaim and is currently nominated for four Olivier Awards. It ran at the Harold Pinter Theatre from 14th January 2020 with an Opening Night on Thursday 23rd January 2020.

To re-create and film for the first time a British theatre production closed by the pandemic, the production team adhered to strict COVID-19 protocols to ensure the safety of both cast and crew. This involved the actors self-isolating before shooting on location at the Harold Pinter Theatre as well as being regularly tested to allow them to perform closely together, as they did on stage in the West End theatre production.

The film reunites nearly all of the original cast of the production that was in its final weeks when the country went into lockdown in March and theatres were forced to close. Only Ciarán Hinds was unavailable and his role has now been taken by Roger Allam who is best known for playing Peter Mannion MP in “The Thick of It” (“A Number”, “Endeavour”, “The Moderate Soprano”).

Sonia Friedman and Sally Angel (Angelica Films) said: “It is fantastic to be partnering with More2Screen on this project. Their strong track record in bringing event films to UK cinemas will ensure that this extraordinary re-interpretation of Ian Rickson’s acclaimed stage production of “Uncle Vanya” will be seen by as many people as possible.”

Toby Jones (“The Detectorists”, “The Birthday Party”, “Tinker Tailor Soldier Spy”), Richard Armitage (“The Hobbit”, “The Stranger”), Rosalind Eleazar (“The Personal History of David Copperfield”, “Deep Water”, “The Starry Messenger”), Aimee Lou Wood (“Sex Education”, “Downstate”), Anna Calder-Marshall (“LOVE”, “Evening at the Talk House”, “Male of the Species”), Dearbhla Molloy (“The Ferryman”, “Dancing at Lughnasa”, “Juno and the Paycock”), Peter Wight (“The Birthday Party”, “Hamlet”, “The Red Lion”) and Roger Allam (“A Number”, “Endeavour”, “The Moderate Soprano”, “The Thick of It”), all star in McPherson’s witty and timely adaptation of Chekhov’s classic which is directed for screen by Ross MacGibbon.

Sonya (Aimee Lou Wood) and her Uncle Vanya (Toby Jones) while away their time on an isolated estate, visited occasionally only by the local doctor Astrov (Richard Armitage). However, when Sonya’s father Professor Serebryakov (Roger Allam) suddenly returns with his restless, alluring, new wife Yelena (Rosalind Eleazar), polite facades crumble and long repressed feelings start to emerge. As the conflicted family are forced to confront their despair, loneliness and each other, can the beauty of life help them find new hope?

Uncle Vanya is the eleventh collaboration between Ian Rickson and Sonia Friedman Productions, with previous productions including “Rosmersholm”, “Jerusalem”, “The River”, “Betrayal” and “The Children’s Hour”.

The stage production of Uncle Vanya was designed by Rae Smith, with lighting by Bruno Poet, music by Stephen Warbeck, sound by Ian Dickinson and casting by Amy Ball CDG.

BBFC is to be confirmed and the running time is 150 minutes approximately.

About Angelica Films
Angelica Films, an All3Media company, is led by award-winning producer Sally Angel, whose credits include the feature documentaries “Tea With The Dames” and “Night Will Fall; Inside the American Embassy”, which captured nine months of daily life behind the scenes of the U.S. Embassy in London; and the digital short “Missed Call”. Collectively, these productions have won and been nominated for many of the industry’s most-coveted awards, including BAFTAs, Emmys, FOCAL and Peabody Awards. Angelica Films team have produced programmes for some of the world’s most respected networks and SVODs, including HBO, Nat Geo, IFC, Hulu, Netflix, BBC, ITV, Channel 4, Channel 5, and UKTV.

About More2Screen
More2Screen is a leading distributor of Event Cinema with an unparalleled reputation among its blue-chip partners for professionalism, responsiveness and the delivery of great cinema events to audiences around the world. Founded in 2006 by CEO Christine Costello, it has been a global pioneer in the harnessing of digital technology to bring the very best in live music, performance arts and cultural entertainment to local cinema audiences, bringing over 150 ‘special event’ productions to its network of more than 7,000 cinemas in 65+ international territories. Its extensive catalogue of world-class productions from across the cultural spectrum is second to none and includes many sector ‘firsts’. A Screen International Screen Awards finalist in 2015, 2016 and 2017, More2Screen won the Screen Award ‘Event Cinema Campaign of the Year’ category in 2018 for the live broadcast of the musical “Everybody’s Talking About Jamie”. More2Screen has recently distributed the musicals “42nd Street” and “Kinky Boots”, the “Riverdance 25th Anniversary Show” and the art exhibition event “A Night At The Louvre: Leonardo da Vinci”. The slate for Autumn 2020 includes new releases Matthew Bourne’s “The Red Shoes” and “Uncle Vanya”.