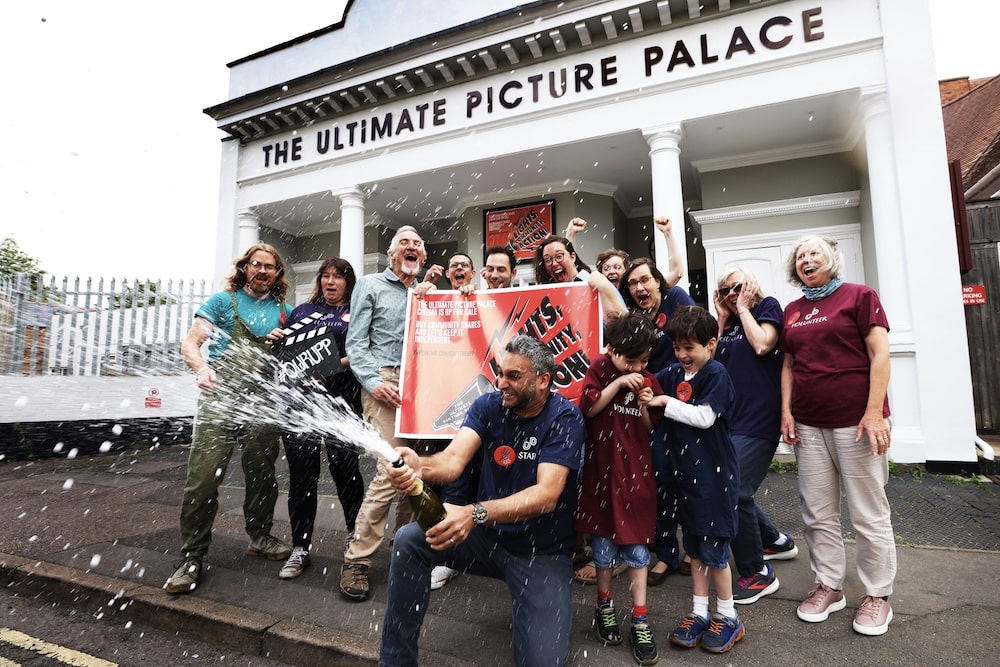 Oxford ( June 29, 2022 ) -
Everyone who’s had a part in securing the future for The Ultimate Picture Palace (UPP) – including its new community owners – are celebrating the exciting news that their beloved cinema will now be community-owned cinema and are looking forward to an exciting new chapter in its 111-year history.

On Friday 29th April 2022, The Ultimate Picture Palace launched their biggest campaign yet. The UPP and the Ultimate Picture Palace Community Cinema (UPPCC), the Community Benefit Society set up to launch the share offer, invited the local community and film lovers all around the UK to save Oxford’s only independent cinema from being sold on the open market and, instead, have their chance to own a part of this historic business.Built in 1911, The Ultimate Picture Palace is Oxford’s oldest purpose-built cinema and one of the oldest cinemas in the UK. The cinema’s fascinating history and its highly regarded ethos for eclectic programming at a low ticket cost has cemented the UPP’s role as a haven for film lovers and a priceless community resource.The UPP’s last owner Becky Hallsmith reasserted the cinema as a cultural landmark within the East Oxford community. Due to Becky’s death in 2018, however, the cinema had to be sold and it was her wish that it become community owned. A group of passionate locals and the cinema’s staff worked hard for four years, as well as through the challenges presented by COVID-19 during the last two years, to ensure this has now become a reality.

Margaret Wolf, UPPCC Committee member on the completion of the campaign: “Today we add a new historic date in the cinema’s long and hugely-loved life. The campaign has now ended hitting not only its minimum and optimum targets (£280,575 and £312,575 respectively), the campaign has achieved the heady heights of £366.585 thanks to an incredible 1265 investors and even more supporters. It’s been a long hard four years but this is undeniably the best outcome we could have ever hoped for, thank you!”

Micaela Tuckwell, Executive Director, Ultimate Picture Palace, added: “We are so very grateful to everyone who has supported and invested in our campaign to secure our beloved UPP’s future. This uniquely historic cinema is now truly owned by a community that clearly treasures it so much. It’s a huge relief that we can now, after two years of uncertainty, move forward with confidence to continue to run the cinema in the way that has captured so many people’s imaginations, loyalty and support. Not only this, but thanks to the phenomenal support that has taken us to our maximum target, we can also now greatly improve on the UPP, making it more accessible to the wider community, and creating an even more enjoyable and comfortable watching experience. Essentially, the UPP really is about to become the best it has ever been in its 111-year history. Long may it continue! We’d also like to say a big thank you to all the staff and volunteers who have worked so hard under the uncertainty to help promote the campaign and keep the cinema going. This new chapter is set to be its most exciting one yet.”

During the campaign a great list of industry luminaries came out in support of the campaign: CEO of BAFTA Pippa Harris; Oscar-winning director Sam Mendes; Downton Abbey actor Hugh Bonneville; Guardian chief film critic Peter Bradshaw; and BAFTA Award-winning filmmaker and screenwriter Richard Curtis, who recorded a film in support of the campaign. Guardian film critic Peter Bradshaw was a special guest at the launch weekend. Peter introduced The Terminator as the film that made the biggest impression on him when he frequented the UPP as a student. Ian Hislop also revisited his past at the UPP with a fly on the wall film, chatting with Peter Bradshaw, at the Private Eye offices. This fascinating insight into how the UPP affected their lives was released as a series of clips on the UPP’s social media channels, with a full version available to watch on Youtube.

As part of the campaign celebrations, the UPP have relaunched online the aptly titled “Ultimate Survivor” documentary about the extraordinary story of the cinema up until 2011 – just before Becky took it over. Head to the UPP’s Watch Online page to see the full 1-hour film.

Philip Hind (Director of the The Ultimate Survivor) shared his thoughts on the success of the share campaign: “It’s a little place with a big history. Having been rescued many times by enterprising individuals, it’s brilliant that the UPP has now been saved by the community that loves it. The UPP is The Ultimate Survivor!”

The campaign was also generously supported by £20,000 of Ethex Match Funding provided by the Postcode Innovation Trust (a charity supported by players of People’s Postcode Lottery) and an award of £20,000 from The Community Shares Booster Fund (a funding scheme to support community share offers that is funded by Power to Change, and delivered in partnership with Coops UK, Locality, Plunkett Foundation and Co-operative and Community Finance.)