The Release of Universal Pictures’ “Fast & Furious Presents: Hobbs & Shaw” Coincides With the Ten-year Anniversary of D-box in the Movie Business 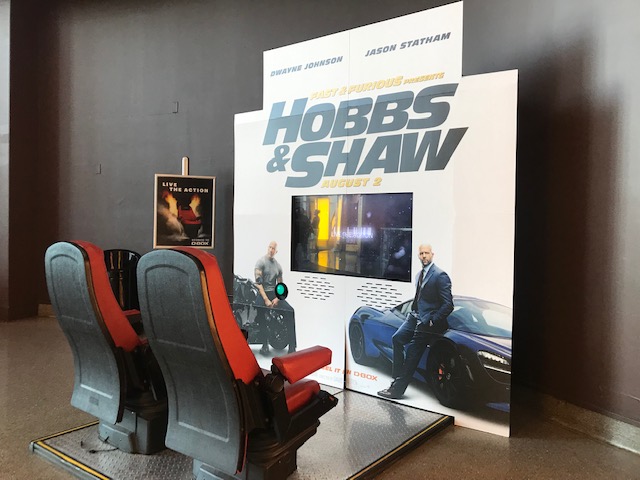 A decade ago, the fourth film in the franchise, Justin Lin’s "Fast & Furious", became the first movie that D-BOX ever coded

D-BOX Technologies Inc. (TSX:DBO) (“D-BOX”), the pioneer and world leader in immersive motion entertainment experiences, is proud to celebrate 10 years of success in the movie business.

D-BOX first created waves at Hollywood’s iconic TCL Chinese Theatre in 2009 with Justin Lin’s “Fast & Furious”, the fourth film in Universal Pictures’ groundbreaking franchise, which has earned almost $5 billion worldwide. The response to the motion technology was immediate and moviegoers were hooked on this new, innovative way to experience movies. As word spread, exhibitors were eager to embrace D-BOX’s unique, new way for customers to immerse themselves in the story. In the years since, D-BOX has worked on every subsequent Fast film, including this summer’s first stand-alone film from the franchise, “Fast & Furious Presents: Hobbs & Shaw”. Today, the Canadian entertainment giant has a commanding presence on close to 750 screens in 41 countries, making D-BOX an undisputed leader in the premium category.

“With nearly 450 movies in our portfolio today, we are so pleased to know that moviegoers are still excited about seeing the next action-packed blockbuster in D-BOX,” states Claude Mc Master, President and CEO of D-BOX. “”Fast & Furious” will always be an important part of our success story because it was the very first movie ever coded with our motion technology. In fact, Universal Pictures was the first studio who took a chance on us and for that we will always be grateful. The happy coincidence of the release of “Fast & Furious Presents: Hobbs & Shaw” on our 10-year anniversary is not lost on us and truly bodes well for another decade of thrills and excitement.”

“We’ve been thrilled to work with D-BOX over the past decade on the Fast films and can’t wait for audiences to see Hobbs & Shaw this summer,” says Jim Orr, President of Domestic Theatrical Distribution for Universal Pictures. “The powerful, immersive motion technology of D-BOX combined with the high-octane action in the movie is an unbeatable combination that’s guaranteed to blow audiences’ minds.”

About D-BOX
D-BOX redefines and creates hyper-realistic, immersive entertainment experiences by moving the body and sparking the imagination through motion. This expertise is one of the reasons why D-BOX has collaborated with some of the best companies in the world to deliver new ways to enhance great stories. Whether it’s movies, video games, virtual reality applications, themed entertainment or professional simulation, D-BOX will make sure you feel it all.

D-BOX Technologies Inc. is a publicly traded Canadian company listed on the Toronto Stock Exchange (TSX: DBO). The head office is located in Montreal and offices are based in Los Angeles, USA and Beijing, China.
www.d-box.com.

Ever since hulking lawman Hobbs (Johnson), a loyal agent of America’s Diplomatic Security Service, and lawless outcast Shaw (Statham), a former British military elite operative, first faced off in 2015’s Furious 7, the duo have swapped smack talk and body blows as they’ve tried to take each other down.

But when cyber-genetically enhanced anarchist Brixton (Idris Elba) gains control of an insidious bio-threat that could alter humanity forever — and bests a brilliant and fearless rogue MI6 agent (The Crown’s Vanessa Kirby), who just happens to be Shaw’s sister — these two sworn enemies will have to partner up to bring down the only guy who might be badder than themselves.

Hobbs & Shaw blasts open a new door in the Fast universe as it hurtles action across the globe, from Los Angeles to London and from the toxic wasteland of Chernobyl to the lush beauty of Samoa.