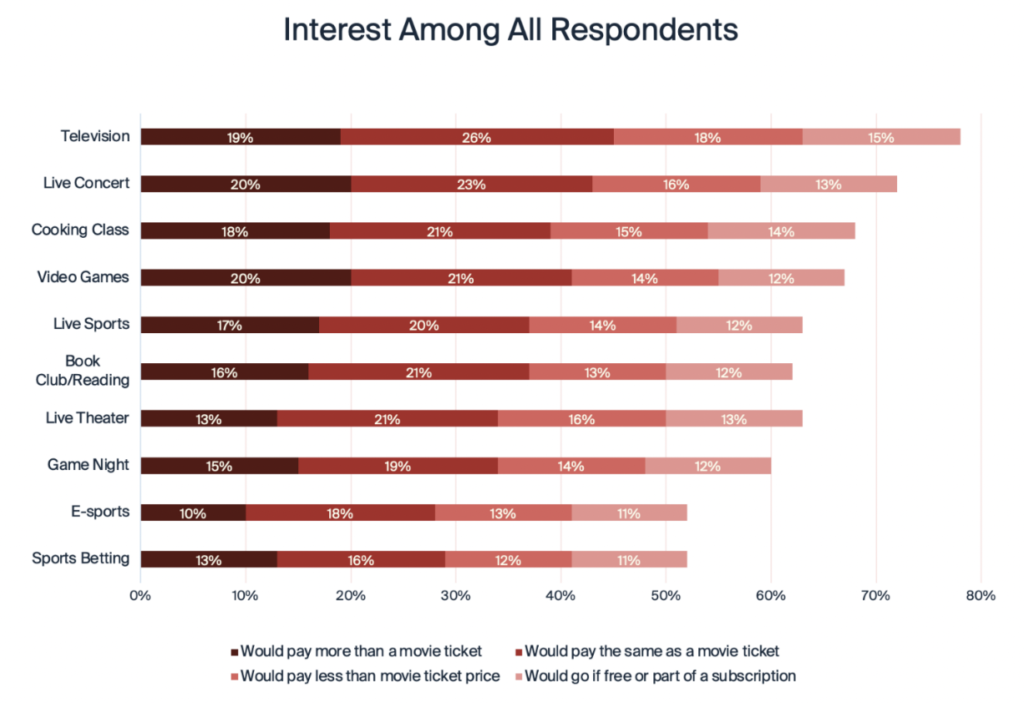 The Cinema Foundation, in partnership with leading film research firm The Quorum, today released a study demonstrating high interest among moviegoers, from frequent to non-active, in non-traditional programming in movie theaters. The study surveyed 5,940 people nationally between July 20 and August 5, 2022.

The survey identified ten experiences ranging from live or pre-premiere television shows and streamed live concerts to in-theater cooking events and E-sports. The study revealed a significant appetite for all ten events among both active and non-active theatergoers. In addition, many of the respondents expressed a willingness to pay a premium beyond the price of a movie ticket for these experiences. Special television episodes, live concerts, and cooking experiences scored the highest interest.

“As the movies we do have performed and overperformed this year, it is clear that audiences are hungry for the movie theater experience,” said Cinema Foundation president Jackie Brenneman. “This study underscores the fact that if we want more audiences, we need to offer more reasons for them to come out. The results here point a way forward to expanding our reach and our attendance. At the same time, they offer an opportunity for distributors, when supply chains are challenged, to leverage high quality entertainment across multiple platforms, including movie theaters.”

David Herrin, founder of The Quorum, added “While a lot of attention has been focused on a lack of films being a drag on attendance, there has been less attention on what to do about it other than ‘more films’. The survey results show that there is a wide range of opportunities for exhibitors and distributors to capitalize on consumers’ love of the theater-going experience with ‘more of everything’.”

About the National Cinema Foundation
The Cinema Foundation — a donor-supported 501(c)(3) charitable non-profit — is dedicated to promoting the essential cinema exhibition industry by developing future diverse workforces and growing moviegoing communities through research, education and philanthropy.

The Cinema Foundation’s mission is dedicated to shaping the future of the great collective experience of moviegoing and the cinema industry. It works to support and impact the health of the cinema sector both in the short term and for years to come and is continuously expanding its contributions to the magic of moviegoing. The Cinema Foundation builds on the National Association of Theatre Owners’ mission and relationships and expands NATO’s impact in ways that help individual employees and companies as well as the industry as a whole. We are the Foundation of a great industry. thecinemafoundation.org

About The Quorum
The Quorum, one of Fast Company’s Most Innovative Companies of 2022, is a leading custom film research company and a pioneer in distributing pre-release film tracking to the general public. Each week The Quorum surveys more than 2,000 consumers nationally about upcoming films, then analyzes the data to provide the public with insight and understanding of the fast-changing film industry. Founded by David Herrin, a veteran research executive and former Head of Research at UTA, The Quorum also provides bespoke research to entertainment and consumer brand clients, delivering the most advanced understanding of their products in the marketplace. Visit https://thequorum.com