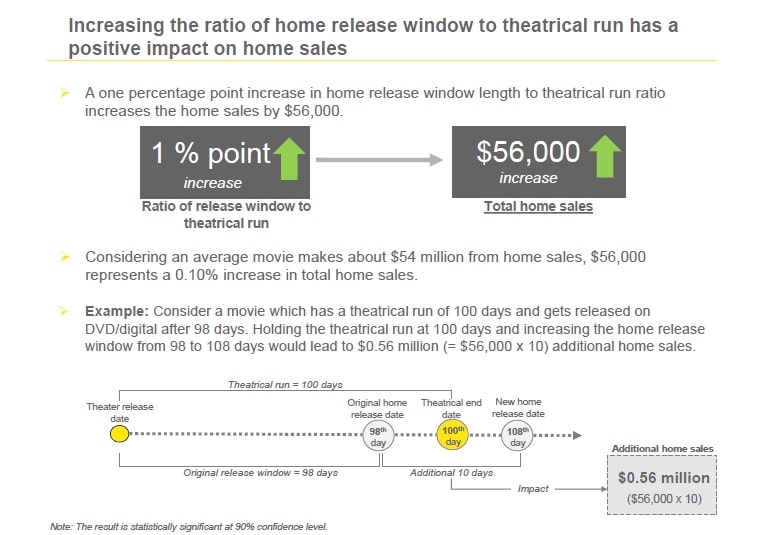 With movie theaters shut down due to the COVID-19 pandemic, studios have accelerated home release for some titles that were already in theatrical release when the industry shut down. Without theaters available, the release window was temporarily irrelevant for those movies. These unique circumstances, however, do not signal a change to the theatrical release model.

Three titles unreleased at the time of the shutdown have chosen to go straight to the home, yet the vast majority of theatrical releases scheduled from March through June have been rescheduled for theatrical release – 37 of them, with 6 more delayed with no set release date – rather than rushed to the home. They range in scope from Antlers from Fox Searchlight (unset) to Mulan from Disney (July 24) and No Time to Die from United Artists (November 25). Studios clearly believe it is in their financial interest to have exclusive theatrical releases.

The data supports that belief.

Ernst & Young today released a study which shows shorter release windows cost studios money in the home market. The study, The Relationship Between Home Release Window Length and Movie Sales, commissioned by NATO, examined the effect of the length of the theatrical window on revenues in the home, in theaters, and overall.

The findings are significant, as shrinking revenues in the home have put pressure on distributors to find a way to boost the fortunes of a home segment in secular decline. Shrinking the length of the theatrical release window has been the mechanism most often cited as a means to that end. This study finds that shorter release windows not only damage theatrical revenues – as expected – they damage home revenues as well.

This study also finds, without controlling for the influence of other variables, the length of theatrical run is more highly correlated to home sales than to box office sales (Study, pg 8).

Coupled with recent studies by Ernst & Young showing that people who stream the most are also the most frequent moviegoers and were more likely to stream a movie if they knew it was released in a movie theatre; and from Barclays, Netflix Films Need An Offline Strategy, demonstrating that “a wider theatrical release strategy would allow Netflix to spend even more on singular pieces of content while driving better returns,” this study builds a compelling case that shrinking theatrical release windows is not benefiting the industry.

It is notable that transactional home revenues have declined as home consumers have shifted their viewing to streaming platforms which are usually the second or third home release window.

*The ratio of the theatrical release window to the length of theatrical run was chosen to address a possible two-way causality issue between the home release variable and the movie revenue.