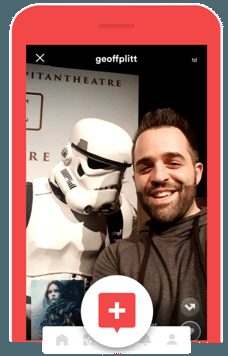 Los Angeles, CA (July 10, 2017) – Social media novices, influencers and enthusiasts alike can now utilize the easy-to-use and free-to-download Stardust mobile phone app to rate and react to the latest in film and television, and share with their friends.  From current reviews of top trending film and TV titles, to nostalgia-driven commentary, and niche genre shout-outs, Stardust creates an interactive environment for all, free from professional critics, distracting ads and content clutter.  Featuring user-generated reaction videos, alongside movie trailers and local cinema showtimes, Stardust is the pre- and post-viewing destination for film and TV buffs, providing a platform for reactions, plus unprecedented access to an ever-growing database of real reviews, from real people, in real time.

Movie tech leader Vista Group teamed up with a former Google engineer, Geoff Plitt, to build the app.  Stardust blends its parent company’s film and entertainment industry roots with the latest in consumer technology and social media trends.  Stardust’s innovative design empowers users to voice their honest and unfiltered opinions in the form of quick and catchy 3-30 second video segments, while cultivating a sense of community among film and TV fans, from the casual viewer to die-hard fans and media personalities.

“When it comes to deciding what to watch next, there’s nothing more powerful than a recommendation from a friend,” says Derek Forbes, Chief Operating Officer of Vista Group.  “Film and TV fan communities are some of the most passionate and engaged out there, and we built Stardust to bring their discussion of movies and shows to life, amplified with the power of mobile, video, and social media.  Even during beta testing, a lot of our users told us they went to see movies because of watching friends reactions about them on Stardust, which is ultimately what this app is all about.  Now that we’ve launched, we are all looking forward to creating that same kind of buzz around movies on a much bigger scale!”

Hitting the app market in May 2017, Stardust quickly amassed an organic and growing following, already catching the eyes of renowned movie reviewers  Movieweb.com and Schmoes Know.  With more exciting partnerships and promotions in the pipeline for 2017 and beyond, Stardust is moving quickly towards its goal of driving movie attendance and TV tune-in by leveraging the power of social proof and user-generated video content.

Stardust is a mobile community of film & TV fanatics sharing video reactions to movies and shows.  As a social network oriented around entertainment, Stardust drives movie attendance and TV tune-in by encouraging discussion amongst friends and fans.  Available on the Apple App Store and Google Play.