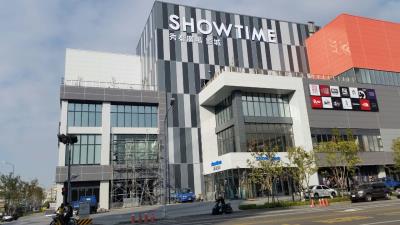 Christie, a leader in creating and sharing the world’s best visual and audio experiences, is pleased to announce the opening of an “all Christie” cinema complex boasting its state-of-the-art cinema projection and immersive audio in Taichung, central Taiwan.

Operated by Showtime Cinemas, the 17-hall Taichung Showtime Cinemas located within the new Taichung Showtime Plaza is poised to deliver the most exciting and lifelike cinematic experience to movie-goers. It is the first cinema in Taiwan to be equipped with Christie RGB laser projection system with enhanced wavelength diversification (EWD) that offers unprecedented brightness, image quality, stability and flexibility. In addition, all halls feature Christie Vive Audio cinema sound system utilizing efficient ribbon driver technology and a unique parabolic line array design in a single compact cabinet to provide exceptionally even coverage throughout every auditorium.

“As one of the leading cinema chains in Taiwan, we are strongly committed in offering the best-in-class cinema technologies for our patrons to enjoy the finest visuals and audio on the opening of our newest cinema complex in Taichung,” said Willy Liao, General Manager, Showtime Cinemas. “We’re convinced that Christie’s highly acclaimed projection and audio solutions are perfect for deployment in this cineplex. Not only does the Christie RGB laser projection system with EWD deliver the best visuals, the unique design and amazing acoustics Christie Vive Audio also provides unmatched surround sound for a spectacular cinematic experience.”

All cinema halls also have line array and surround speakers from the Christie Vive Audio LA Series, S115, S215 and S218 subwoofers, as well as CDA3 and CDA5 Class D amplifiers – providing a hyper-accurate audio experience and unlocks the full dynamic range of DCI digital cinema audio and supports leading formats such as Dolby Atmos, 7.1 and 5.1 surround sound. The Christie Vive Audio system continues to establish its reputation worldwide as the next standard in immersive sound for cinema. Taichung Showtime Cinemas is also the site of the 400th Christie Vive Audio cinema sound system to be installed worldwide.

Emily Hong, President, Dacoms Technology, said, “We’ve been working with Christie for many years and have always been very impressed with the company’s constant technological and groundbreaking advancements in digital cinema. Our team members involved in this major project in Taichung have benefited much from working with Christie’s highly proficient technical team, and are thrilled to bring the latest RGB laser and immersive audio technologies to cinema audiences in Taichung.”

Lin Yu, Vice President, Christie Asia Pacific, added, “We are delighted that Showtime Cinemas has chosen our advanced cinema projection and audio solutions for its newest cineplex located in Taichung. This is a clear testimony that our field-proven and robust cinema solutions, in particular RGB laser and Vive Audio, are the pinnacle of quality versus any competitive solution. This is why Christie has become the preferred choice for a premium 3D cinema experience for an increasing number of leading exhibitors in Asia and around the world.”

Christie Digital Systems USA, Inc. is a global visual technologies company and is a wholly-owned subsidiary of Ushio, Inc., Japan, (JP:6925). Consistently setting the standards by being the first to market some of the world’s most advanced projectors and complete system displays, Christie is recognized as one of the most innovative visual technology companies in the world. From retail displays to Hollywood, mission critical command centers to classrooms and training simulators, Christie display solutions and projectors capture the attention of audiences around the world with dynamic and stunning images.

Showtime Cinemas is one of the leading cinema chains in Taiwan. Established in 2002, it currently operates cineplexes in eight different locations, including Taipei, Keelong, Chiayi, Hualien, and Taitung. Showtime Cinemas is currently expanding its footprint in other parts of Taiwan, and is expected to open five new cinema complexes over the next two years. For more information, please visit www.showtimes.com.tw.